After a long sea journey from India, Nasserbhai Pardhan arrived in Zanzibar in 1900. He lived there for four years followed by 18 months in Pemba and 18 months in Tanganyika before opening a shop at Changamwe, a suburb of Mombasa. After spending four months at Changamwe, he travelled to Kisumu by train and onwards to Jinja by boat.

In 1908 Jinja was a very small town. The houses were of two types, those made of iron sheets and those made of mud with thatched roofs. Our community members who had shops in Jinja were Walji Bhanji, Haji Merali, Abdulla Nathoo and Juma Muman. Nasser Pardhan joined in the employment of Haji Merali. Another employee was Suleman Esmail. Mohamed Manek was an employee of a famous entrepreneur Allidina Visram. Our community consisted of 7 families.

Abdulla Nathoo had constructed a special room made of iron sheets in the compound of his house to be used for majlis. A famous Sunni Aalim Molvi Abdulla Shah used to recite majlis. Haji Tamachi Turk, a famous Sunni brother who had very friendly and cordial relations with our members used to sponsor nyaz and majlis. The Nyaz on 12th Muharram was regularly sponsored by him. His departure from Jinja in 1958 resulted in changes in our regular programme. There were four Bohra families who were close to our community. The nyaz on 9th Muharram was regularly sponsored by a Bohra community member Abdulhussein Kadarbhai. After 1958, the Bohra community started having their own programmes due to increase in their population.

In 1910, some European families opened businesses in Jinja. The main agricultural produce was chillies (pilipili hoho) and simsim. Cotton produced was little and of poor quality. A European called Mr. Burkell used to have a manual spinning wheel (charkha) which he used to gin cotton. Due to encouragement from government, cotton production increased a lot leading to gradual reduction in production of chillies and simsim. By 1923, cotton became the main agricultural produce. In 1918, there was an outbreak of influenza which led to deaths of many people.

By 1926-27, our community had increased substantially. There were also about six Ismaili families in Jinja at that time. In 1926, efforts were made to start construction of an Imambara. Haji Merali and Suleman Esmail travelled to several Jamaats to collect donations for this project. By 1927, the Imambara was ready. During the opening ceremony, Haji Merali contributed Shs. 1500/-. The Jinja community was deeply indebted to the sacrifice and contribution of Haji Merali for his services. 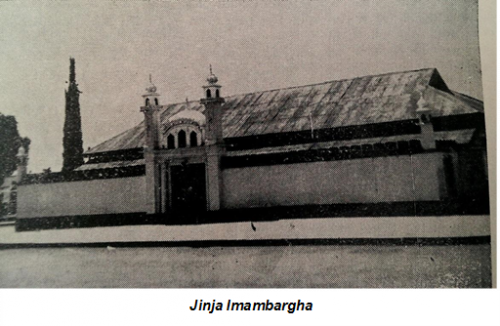 Upto 1926, bicycle was used as the main means of communication. Postal services started in 1906 when Haji Suleman Turk offered his guarantee that he would sell stamps worth 500 rupees every month. Telegraph services also started in 1906. Local telephone service started in 1910 and this was extended to nearby areas in 1940. The Rupee was currency in vogue until 1920. The Florin was introduced as currency in 1921 and Shillings and Cents were introduced in 1922.

Jinja had its share of raids by bandits. Once, fifty bandits, their faces covered with mud and charcoal and armed with weapons, raided two Indian shops at Bujuta, seven miles from Jinja. One of the shops was that of Nasser Pardhan. On learning of the raid, Mohamed Manek arrived at the scene with his pistol. The bandits fled and one of them was apprehended and handed over to the police. Unfortunately, the looted property was not recovered.

A similar incident happened in 1917 at Kaberamaido where Nasser Pardhan was manager of Moledina. While Nasser was seated at his shop, about 15 people came to ask for free cigarettes. Nasserbhai refused their demand and they attacked him with their sharp long sticks. Nasserbhai immediately got hold of a matchet (panga) and a rhino whip and countered them with the help of six other people who were in the shop at that time. The bandits fled away.

In 1926, there was an outbreak of plague. Juma Muman became a victim of this infectious disease; he was able to survive after some local treatment.

In 1935, some industries started being established in Jinja and our community’s population also increased. Jinja started to develop very fast. New beautiful buildings mushroomed and Jinja became known as the second most beautiful town of Uganda.

The Jamaat was not formed on a formal basis and Hassanali Rashid used to carry out all Imambara duties. He served the Jinja Jamaat continuously from 1928 to 1941 with great enthusiasm. Hassanalibhai always tried to create interest among the non-Ithnaasheris to attend majlis. As a result of his efforts, many non-community members attended majlis and some even arranged majlis at their homes. Hassanali was in the forefront in involving the entire Muslim community in observing Azadari. His efforts to this end were very successful. Hassanali’s wife Jenabai was also keen in involving all in Azadari. She was able to convince a non-Muslim lady to do ‘nazr’ for conceiving a child. Fortunately, the lady conceived and she kept on attending majlis on the 7th night of Muharram every year. In 1927, Habibbhai Kassamali Jaffer (HK Jaffer) constructed a mosque and donated it to Jinja Jamaat. Habibbhai used to donate towards the expenses of mosque and Imambara on regular basis.

Mohamed Manek migrated from India to Mombasa in 1905. He then proceeded to Kisumu by train and by boat to Entebbe. He then went to Jinja where he joined in the employment of the famous entrepreneur Alidina Visram. After working for 15 years, he bought a farm near Bujuta, 14 miles from Jinja. He grew rubber, coffee, sugarcane and maize at this farm. He also produced jaggery from sugarcane. Mohamed and his family lived in a house made of mud. Once he had to travel for work and had to leave his family behind. A group of bandits, armed with bows, arrows, scythes and spears attacked his home while he was away. Mohamed’s wife Fatmabai, took a rifle and started shooting. On hearing rifle shots, the bandits ran away. Fatmabai, who had learned how to use rifle from Mohamed was able to avert disaster. Mohamed Manek had cows and goats at his farm. He used to regularly lose one or two animals being eaten up by the lions. One early morning, Mohamed opened his house door, only to find two lions staring at him. He immediately got hold of his rifle and fired shots at the lions.

In 1926, there was a plague outbreak. An Ismaili brother, Rashid Khamis, his wife and his daughter got this infectious disease. Rashid’s wife died as a result of this disease. No one was ready to give Ghusl (Islamic ritual bath) to the lady due to the infectious nature of the disease. Fatmabai and an African lady gave Ghusl. On the second day, Rashid passed away and Mohamed gave him Ghusl and handed over the body to the Ismaili community. On the third day, the daughter passed away and Fatmabai carried out the Ghusl rituals.

The following story has been narrated by Kulsumbai Rajabali Rashid, daughter of Mohamed Manek of Jinja