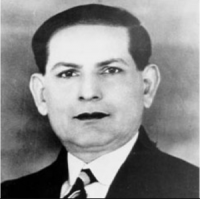 With favourable trade-winds, the sea journey by dhow from Porbandar to Mombasa took around 30 days. When the sea was rough, the journey could take longer and even take the craft to Madagascar. Mohamed Manek set off on a dhow in 1903 when he was only 13. The journey took three months. At Mombasa, Mohamed Manek started working for Allidina Visram, “the Uncrowned King of East Africa”, and was soon appointed the manager of his Boondo estate in Mengo. Mohamed had to travel partly by railway and partly on ox-cart to Kisumu, and then sail up Lake Victoria by boat to Entebbe.

In 1910, at the age of 20, Mohammed Manek went to Zanzibar to marry Fatmabai Ladha Khaki and then returned to Uganda to start his own business. Manek located his first shop in Bujuta, five miles to the west of Jinja on the main road to Kampala. Lions roared at night. Various other pioneering personalities from Gujarat were settling nearby. Nasser Pradhan came in 1904 and Velji Bhowan, Haji Merali, Abdalla Nathoo, Juma Moman and Suleman Esmail by 1907. Suleman worked in Haji Merali’s business. In 1906, the renowned Haji Suleman Turk established a postal service by giving a personal guarantee to the colonial government that he would achieve yearly sales of postage stamps of at least 500 Rupees. Roads were being improved and telegraph service was introduced the same year. Asian settlers started to run general retail stores and shops in the interior. Pirmohamed Turk started a small shop in Bugungu. The number of shops in Bujuta increased to six, three owned by Ismaili families of Kara Pradhan, Jamal Pradhan and Velji Bhowan and the other three owned by families of Nasser Pradhan, Ali Jeraj and two brothers Hasanali and Rajabali Rashid. The two brothers married MM’s two daughters, Hasanali to Jenabai and Rajabali to Kulsumbai.

The two main agricultural products in that part of Uganda at that time were red pepper (known as “pilli pilli ho ho”) and sesame seeds. In 1910, an Englishman named Mr Burkle started ginning cotton using a hand-wheel to comply with the government’s policy to give preference to cotton. By 1923, cotton had become the main cash-crop of Uganda.

At around, this time Manek owned two large plantations at Bujuta and Boondo (14 miles from the Source of the Nile; probably bought from Allidina Visram) where he planted rubber, coffee, maize and sugar cane. He built a mill to make jaggery. Manek started a cotton ginnery at his Bujuta estate and purchased land in nearby Bamungaya to grow more sugarcane to manufacture jaggery. He upgraded his means of transportation from the ox-cart to a motor cycle with a sidecar. Africans fled into the bush at the sight of this noisy and smoky contraption. Soon he became the first person to own a motor car in Busoga, a Ford Model-T.

In his early days when he travelled by ox-cart, Manek always carried a gun as protection against wild animals and robbers. The nearby lions had discovered a supply of easy food in Manek’s cattle ranch. Early one morning in 1917 when Manek opened his front door he found two huge lions, male and female, staring at him. Manek ran back into the house, grabbed his rifle and shot both. After this, Manek taught his wife how to use a gun in case of similar emergencies when he was not around. The occasion arrived soon, but it was in the form of bipeds! Africans robbers armed with spears and pangas were beginning to come over the plantation fence. Fatmabai fired off a round in the air. The bandits dispersed. In 1930, a worse fate befell Nasser Pradhan in his village shop outside Jinja. Fifty Africans in war paint had surrounded the shop, brandishing pangas and spears. Manek was passing by. He fired off a few shots in the air. The bandits fled. One of them was caught and handed over to the police, but the stolen goods were never recovered.

The mid-1920s are remembered for the plague in Busoga. It brought out the mettle in the settlers. Juma Moman developed the usual symptom, a knot on the thigh. He refused modern medicine and simply prepared a red hot iron which he placed directly on the knot. Victims included members of the family of Rashid Khamis, and Allidina Visram’s lieutenant. So many people were dying that burial was haphazard, sometimes without any religious services. No one was prepared to perform the ghusal (the Islamic ritual washing of the body before burial). Fatmabai, assisted by an African lady, did that for the ladies and Manek for men. The ghusals took three consecutive days to complete.

In 1932, Mohammed Manek and family moved to Jinja. Fatmabai passed away on September 26, 1935 and is buried in Jinja’s cemetery. She had borne seven children – sons Abdul-husein, Abdul-rasool, Akbar-ali, Raza-husein, Mohamed-husein, and daughters Jena-bai and Kulsum-bai. Mohammed Manek got married again, this time in India, to Sugrabai. After the expulsion of Asians from Uganda, Sugrabai settled in Hamilton, Ontario, where she died in 2005. She had six children; Ramzan-ali, Asgar-ali, Inayat-ali, Sultan-ali, and daughters Nargis-bai and Nasim-bai. When he went to India, Mohammed Manek sold some of his ancestral farmland in India and brought back the capital to Uganda to expand his businesses.

In the 1940s, Jinja had several independent Asian bus transport operators who squabbled and engaged in cut-throat competition for passengers and routes, including poaching passengers, right from their seats by offering them lower fares. There were no fixed departure times for the journeys. The bus station was as chaotic as a fish market.

Mohammed Manek proposed a scheme to unite all the bus operators in a joint stock company, with each participant getting a proportion of the profits. It was a daunting task, given that the operators were neither well educated nor well informed. There was no track record to go by, nor another transport company to emulate. Mohammed Manek commanded the respect of these independent bus operators and persuaded them to unite under his leadership. He engaged the assistance of a lawyer RG Vedd of Lugazi to draw up a business plan to submit to the government. Manek’s team negotiated a monopoly for the company in eastern Uganda. It was called the Eastern Province Bus Co Ltd, with its head office in Jinja. Mohamed Manek became the director with his brothers Mohamed Mitha and Ibrahim Mitha, Pabari, brothers Hassanali and Rajabali Rashid, and Mohamed Rahemtulla. The first bus route was from Jinja to Mbale, 125 miles to the east. That route itself helped Mbale become Uganda’s third largest town. Soon after, a second route was opened to Soroti.

- Jena-bai, Abdul-husein and Sultan died in Jinja and are buried there.

- Abdul-rasul migrated to England and is buried near Guildford.

- Akbar-ali went to Scotland and is buried in Birmingham.

- Raza-husein and Kulsum-bai migrated to Sweden and are buried in Trollhattan.

- Mohamed Husein migrated to England and is buried in north London.

- Ramzan, Asgar, Inayat, Nargis and Nasim migrated to Hamilton, Ontario, and are happily settled there.