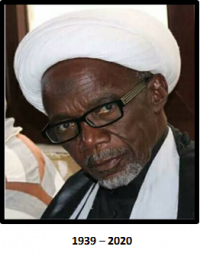 It is with immense sorrow and grief that Africa Federation Secretariat and Bilal Muslim Mission of Tanzania received the sad news of the death of Alhaj Sheikh Abdallah Seif Linganaweka who passed away peacefully in Dar es Salaam on Friday, September 11th, 2020 (22nd Muharram1442 A.H.) and was buried in Lindi, his home town on the following day, Saturday, 12th September 2020 (23rd Muharram 1442 A.H.) The passing away of Alhaj Sheikh Abdallah Seif is an irreplaceable loss not only to his family members, students and colleagues but to the entire Shia community in Africa.

Sheikh was under the tutorship of Allamah Sayyid Saeed Akhter Rizvi Saheb for many years. In 1968, he along with two of his colleagues travelled to Basra by ship for studies in Hawza of late Ayatullah Sayyid Muhsin Tabataba’i al-Hakim in Najaf, Iraq, he also studied in Lebanon and later on went to Qum where he studied for 7 years, a total, 11 years of religious studies. He returned to Tanzania in 1979 and continued serving Bilal Muslim Mission of Tanzania. Sheikh Abdallah Seif has bestowed the title of Sheikh upon his graduation in higher religious studies by Grand Ayatullah Sayyid Muhsin al-Hakim.

Sheikh was born in 1939 in Mnan’gole Village in Dimba region - Lindi, a southernmost coastal town in Tanzania. He was a learned, humble and pleasant personality and served the institution with great dedication and remained deeply committed to propagating the Shia Ithna-Asheri faith till his last breath. He served Bilal Muslim Mission of Tanzania between 1970 - 1980 under the then Chief Missionary, Allamah Sayyid Saeed Akhter Rizvi Saheb.

"Death of an Aalim is Death of Aalam."