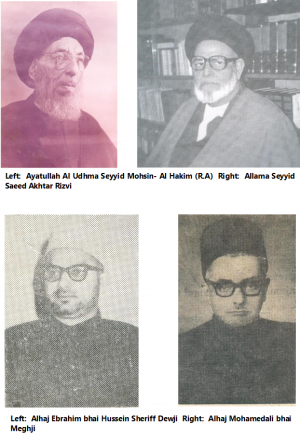 The one who championed and initiated the idea of extending tabligh outside the Khoja Community in Africa under an organization which later became known as Bilal Muslim Mission was Alhaj Ebrahim bhai Hussein Sheriff Dewji, then the youngest ever Chairman of the Khoja Africa Federation. We also lost him at a young age of 40 during his second tenure of office, in January, 1964. I was present at his funeral in Zanzibar. Ebrahim bhai spoke good Farsi and had raised, among other issues, the one of tabligh outside the Khoja Community, when he visited the Marja of the time, Ayatullah Al Udhma Seyyid Mohsin- Al Hakim (R.A) while he was the Chairman of the Federation.

The idea was concretized by the subsequent Chairman, Alhaj Mohamedali bhai Meghji and the inception of Bilal Muslim Mission was the result of that historical Resolution adopted at a Conference of the Africa Federation held in Tanga where I was one of the delegates representing the Dar es Salaam Jamaat.

Allama Seyyid Saeed Akhtar Rizvi was offered the enrolment as Dar es Salaam Jamaat Resident Alim while he was still in India. He had applied for the appointment and was successful mostly because he knew English relatively well, a rarity of the time for the Islamic Scholars from India. However, as he was getting delayed in catching a passenger ship for Dar es Salaam and while the month of Muharram was only a few weeks away, the Dar es Salaam Jamaat had made an alternative arrangement for a Zakir.

In the meantime, the Lindi Jamaat requested the Dar es Salaam Jamaat to find it a Zakir for Muharram then commencing soon. I, as the Hon. Secretary of the Dar es Salaam Jamaat was directed by the Management Committee of the Jamaat to get Allama Seyyid Saeed Akhtar Rizvi who had already arrived in Dar es Salaam to agree to go to Lindi and accordingly, I booked him a flight to Lindi to arrive in time for the Muharram Zakiri. He was much liked by the Lindi Jamaat and therefore he continued to serve it. The most praise-worthy of the Allama was his resolve to learn Kiswahili when others like him in the engagement of tabligh did not choose to learn any new language, even Gujarati or English even after living for years with a local Jamaat. Allama’s zeal in tabligh soon caught the attention of Ebrahim bhai Sheriff, the Chairman of the Africa Federation whose office was based in Arusha. He was posted in Arusha to handle the new desk set for recruiting Resident Alims for Africa Jamaats under a centralized system of appraisal and under a standard form of Contract.