Ayatullah Sayyid Al-Hakim was born on 31st May 1889 in Najaf, Iraq was the son of Sayyid Mahdi al-Hakim a great religious scholar in Najaf. Ayatullah Al Uzma Sayyid Muhsin al-Tabatabaei al-Hakim an eminent personality among the Shia Muslim religious leaders became the leading marjae in Najaf of the majority of the Shia world in 1961, after the death of Ayatullah Sayyid Hossein Boroujerdi. He was among the renowned Maraja of Najaf and was considered to be one of the most famous scholars of the time after Ayatullah Abu Al Hassan Al-Isfahani and Ayatullah Hossein Borujerdi. A colleague of Ayatollah Sayyid Abul Qassim Al-Khoie, he nurtured many students among whom few are contemporary Marajei namely, Ayatullah Sayyid Ali Al-Husseini Al-Sistani, Ayatullah Wahid Khurasani, Ayatullah Makarem Shirazi and few others.

His magnum opus ‘Mustamsak al ‘Urwat al Uthqa’ in 14 volumes is widely used in contemporary academic circles. He had been always an insightful and inspirational personality for the entire community. Apart from religious guidance, he also motivated the donors to strive for the upliftment on Shias in Africa and Indian sub-continent. Our community leaders had a great relationship with this late Marja and he was the one who inspired the community members to commence the Tabligh activities among the indigenous communities in East Africa, thus the Bilal Muslim Mission was established in East Africa in 1968. 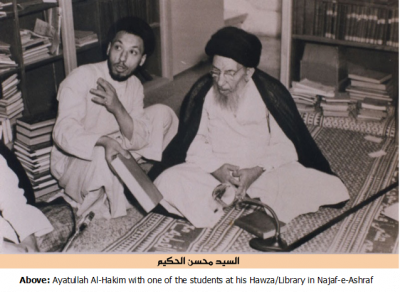 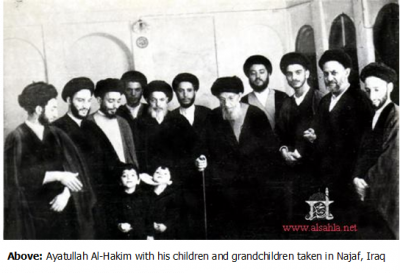 Last Years of his Life

During the last years of his life he underwent house arrest, and the Shiite seminary in Najaf and Shiites in Iraq faced many hardships under the tyrannical rule of the Ba’ath Socialist Party of Iraq led by Ahmed Hassan al-Bakr and Saddam Hussain from 1963. The community in Africa are blessed to have had great Marjae Taqleed, the likes of Ayatullah Abu Al-Hassan Al-Isfahani, Ayatullah Hossein Boroujerdi, Ayatullah Muhsin Al-Hakim, Ayatullah Abul Qassim Al-Khoe, Ayatullah Muhammad Reza Golpaygani and presently Ayatullah Ali Husseini Al-Sistani, may Allah (SWT) keep him safe and grant him good health, long life and strength to continue guiding us, Ameen.

Ayatullah Sayyid Muhsin Al-Hakim passed away in Baghdad, Iraq on 27th of Rabi al Awwal in 1390 AH (2nd June 1970) at the age of 84 years and was buried in his own library in Najaf.