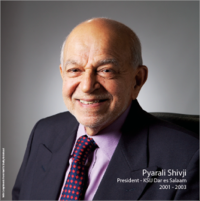 Alhaj Pyaralibhai was born in the year 1940 in Maevatanana, Madagascar. In the year 1947, after the passing away of his father, Pyaralibhai migrated from Maevatanana with his mother and three sisters and settled in a small village called Newala in Lindi, a Southern region of Tanganyika. He lived with his maternal uncle Mohammedalibhai Gulamhussein Murji. After attaining Primary and Secondary education in Lindi, Pyaralibhai returned to Newala to join the family business. He began his Community services in Newala where he served as Hon. Secretary of the Jamaat.

In 1965 Pyaralibhai married Masumabai Pyarali Virani and were blessed with two sons and one daughter. Pyaralibhai worked for a known Kanji & Jaffer Company in Mtwara and gained experience. In 1970 Pyaralibhai made a breakthrough and shifted to Dar es Salaam from Lindi. In Dar es Salaam he started his own business called Anuzu Gunny Bags Supplies Ltd. His business flourished because at that time all the grains produce was packed and transported in gunny bags (jute bags). In 1988, he ventured in hotel business and built Safari Inn Hotel.

Among the notable achievements during his term were launching of the first website of the Jamaat and establishment of the Senior Citizen Group in the Community. Later on, he became the patron of the Senior Citizen Group and continues to be one. During his tenure, the housing development project for the needy was initiated whereby 15 flats were built with funds from a generous donor in the year 2003. He was appointed as the Chairman of the Arbitration Committee of Khoja Shia Ithna Asheri Jamaat of Dar es Salaam from the year 2003 to 2009 and continued up to the year 2014. 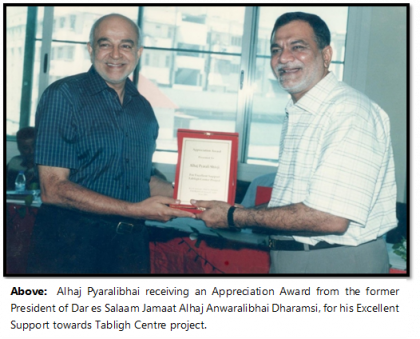 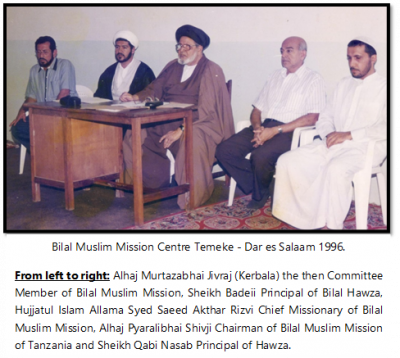 During the 79th Supreme Council Session of Africa Federation which was held in Nairobi in July 2017, the Chairman of Africa Federation, Alhaj Shabir Najafi bestowed the prestigious Husseini Medal to Murrabbi Alhaj Pyarali Shivji for his long honorary and dedicated services to the community including Bilal Muslim Mission of Tanzania for many years. In the absence of Murrabbi Pyarali bhai at the Supreme Council Session due to his inability to travel to Nairobi due to health reasons, the Citation and the Medal were handed over to Dar es Salaam Jamaat to present to Murrabbi Pyarali bhai Shivji at an opportune time. In his message, the AFed Chairman, Alhaj Shabir Najafi praised Pyarali bhai for his pleasant, humble and modest nature which has earned him high respect in the community and also outside the community. He wished him well, long life and good health. Pyaralibhai continues as an active member of the Community.