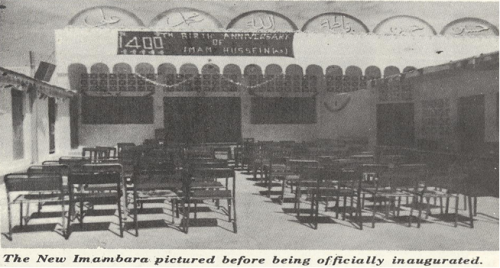 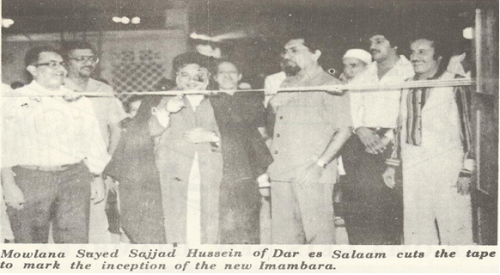 The Chairman of the Africa Federation, Alhaj Mohammedbhai Dhirani officially inaugurated a new Imambara in Kigoma last May (1983). The tape cutting at this memorable occasion was done by Maulana Seyed Sajjad Hussein of Dar-es-Salaam Jamaat at the request of Mohamedbhai Dhirani.

The Chairman who was on an official visit to Kigoma was accompanied on the trip by Vice Chairman Haji Habib J. Mulji and Maulana Seyed Sajjad Hussein of Dar-es-Salaam Jamaat. Two veteran Kigoma businessmen who have been residing in Dar-Es-Salaam, Haji Mubarak Ladhu Jaffer and Haji Amirali Mulla accompanied the AFED Chairman on the visit. The delegation was received in Kigoma by the acting President of the Jamaat, Haji Muslim Fazal Kassam and members of the managing committee there. In a speech during the Imambara opening ceremony, Alhaj Mohamedbhai Dhirani thanked Allah (swt) for His mercy and countless blessing on all momineens and also for having given his delegation an opportunity to visit Kigoma on the auspicious occasion. He expressed his pleasure and was highly impressed in the way the affairs of the Kigoma Jamaat were being managed. He also praised the vigor of the Jamaat Committee there, which consists almost 90% of youngsters.