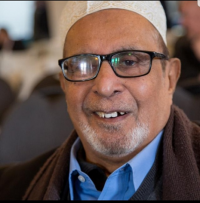 Marhum fondly known by all as Mulla Annu was an iconic figure of Mombasa Jamaat who has left his fond memories in many parts of the world. Mulla Annu was born and educated in Mombasa. He was the schoolmate, close friend and confidant of Alhaj Mulla Asgharali M. M. Jaffer until the time of the sad demise of Alhaj Mulla Asghar in 2000. He worked closely with Marhum Mulla Asghar in mobilizing the youth of our community during the process of amalgamation of two Jamaats that then existed in Mombasa, in October 1966. Coincidentally he passed away in the same month 53 years later.

He learnt Urdu language under the tutelage of Marhum Mohamed Mulla Jaffer (father of Alhaj Mulla Asghar) and Alhaj Mulla Abdulrasul Hassanali Khaki whilst acquiring his religious education at the Husayni Night School in Mombasa. He used to recite Majalis in Urdu, Gujarati and Kutchi and was gifted with a unique resonating voice whereby whenever he recited Ziyarat after Majlis, people would be prompted to shed tears and whenever he recited Kalema-e-Shahadatayn at the funerals, the bystanders would be compelled to stand in awe.

Mulla Anvarali had a very good memory and was fond of collecting photographs, articles and news items related to the history of Mombasa Jamaat. He was considered to be a repository of the history of our community in Mombasa. He had a gift that as soon as one mentioned his name, he would straight away give the person his full family tree spanning from his past generations

At young age, Marhum joined the Ithna Asheri Young men’s Union as a volunteer and served as a managing committee member of Mombasa Jamaat for a period of about forty years under different Presidents before and after amalgamation of the two Jamaats. He attended many meetings of the Africa Federation as a Councillor or Delegate of the Mombasa Jamaat and later on as a special invitee and use to share his knowledge and liven up the meetings with his humour

In April 2010, Mulla Anu was presented with the Chairman’s Appreciation Award by the newly elected Africa Federation Chairman Alhaj Anwarali Dharamsi for his long and continued participation at the Africa Federation meetings. 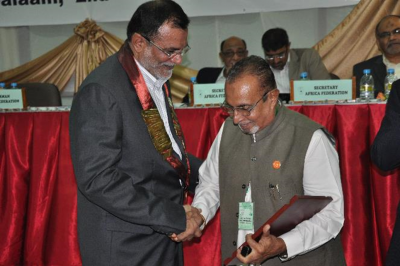 Marhum had a charming personality and was jovial by nature, who mingled freely with the young and old, rich and poor. His demeanor was such that his presence would illuminate any room.

He was conscious of family values and encouraged his family to attend weddings, funerals and visit the sick people, a virtue he followed until his last days

Mulla was a great supporter of the Africa Federation and his presence at the Africa Federation meetings and occasions with his wise counsel, wisdom and liveliness will be deeply missed. A great lover of Ahlulbayt (a.s.), his recitation of Duas and Ziyarat was always heart touching leaving an imprint on the audience

He was a loving father whom we will miss dearly, what we are today is because of him, he always emphasized on unity, love and maintaining a bond with family members

The Secretariat received with sadness the news of the passing away of Alhaj Anvarali Valimohammad Walji in London, U.K. on Saturday 26th October 2019 and was buried there on the same day at the London Northwood Cemetery. The Secretariat conveys its heartfelt condolences to his sons Mohammed and Mustafa and all family members.

Marhum Mulla Annu was interviewed by Mehboob Lakha in Mombasa in 2018. The series of the interviews are available on YouTube. The interview carries vast information about the history of our Community especially of Mombasa Jamaat