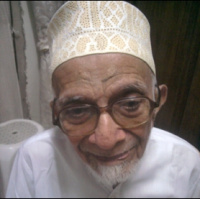 For the past one and half century, we (Khoja Shia Ishna-asheri) have survived and progressed as a community, thanks to many individuals in different walks of life who have quietly dedicated their lives in the service of the community without seeking any position or public recognition. To the community members settled in the West, when they observe middle aged individuals originating from Mombasa actively participating in religious activities and in other social services, invariably they will notice one common bonding force amongst them, i.e. they were taught by Alhaj Mulla Abdulrasul Mulla Hassanali Khaki at the Huseini Madrassah in Mombasa and the inspiration they drew from him.

Silent workers who seek no recognition or publicity are the backbone of this Community. These are those individuals who in different walks of life have quietly dedicated their lives in the service of the society. From Mombasa, Mulla Abdulrasul Khaki falls into this category of personalities for which posterity will remain indebted to.

Imparting religious education and conducting classes in Fiqh and Islamic history has been the lifelong mission of Mulla Abdulrasul. To this day, despite his age and a heart by-pass surgery that he had to undergo, followed by eye problems related to Glaucoma and retina detachments which limited his vision and curtailed his passion for reading, Mulla Abdulrasul is ever ready to conduct classes, even if it be for one student.

Apart from teaching in Huseini Night School and later on at the Huseini Madrasah, which he continued to serve until the year 2000, Mulla Abdulrasul also took special interest in conducting special classes for adults on Islamic History. For years he also ran special classes for prospective Hujjaj to acquaint them with the masael for Hajj. In early 1970's, late Dr. Jafferali Asaria, who was the then Hon. Secretary of the Federation of K.S.I. Jamaats of Africa, initiated the idea of adult classes for ladies. Mulla Abdulrasul conducted these classes on Fiqh, History and Muaamelaat (dealings) and indulged in interactive discussion with the participants seated behind the screen.

While on a visit to London for medical treatment, at the request of Mulla Asghar, Mulla Abdulrasul conducted special classes on Fiqh for the new converts to Islam. In addition to his role as a Madrasah teacher, since 1956, Mulla Abdulrasul has been an active member of the Ghusal Kafan Committee and has, over the years, taught scores of individuals on the related practices and masael. To his credit, he has trained three generations of pupils active in this field. He has also cooperated with the Bilal Muslim Mission of Kenya in running classes on Ghusal Kafan for Muallims from rural areas. Mulla Abdulrasul believed that for a religious leader (whether male or a female) to be effective, one must engage in social activities and be seen to be part of the society. All through his life, he practiced this outlook.

In 1974, Mombasa Jamaat convened a special Open Forum for ladies to review rites, rituals, customs and traditions practiced by the community. It was recognised that no effective changes in our traditions could be brought about without active involvement of the ladies section. The entire managing Committee of the Jamaat, accompanied by late Maulana Aqa Haider and Mulla Abdulrasul sat behind the screen as participants reviewed a wide spectrum of traditions and the changes proposed. Another sphere of his active involvement has been in match making and as a member of the Marriage Reconciliation Committee. In addition, he is also an effective Zakir delivering Majalis in Gujarati for which he has travelled to Madagascar and to Paris during Muharram. It is gratifying that the community leadership has often recognised services of such individuals during their life time.

Shining Example of the Community

Mulla Abdulrasul is a shining example of how individuals can have a lasting impact by dedicating their lives in servitude to the community and promoting our faith.

During the visit to Mombasa by the Africa Federation Vice Chairman, Alhaj Aunali Khalfan who was accompanied by Alhaj Fazleabbas Bhanji, he recalls that Mulla Abdulrasul was very keen in following up on the Madressah syllabus and the number and the frequency of Madressah classes in several Jamaats including Mombasa; for both girls and boys. He underscored the need to increase the number of classes and the teaching of the holy Qur’an with meaning and understanding of the Holy Book 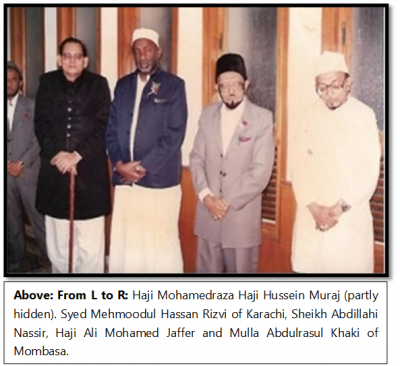 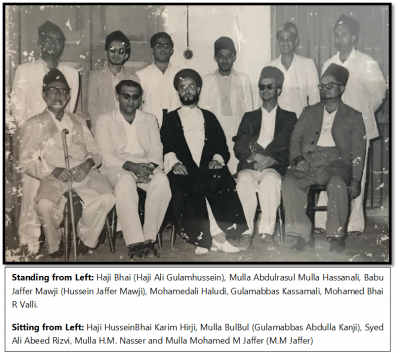 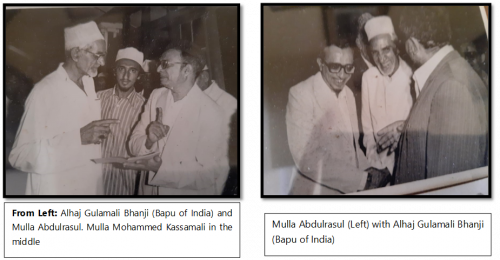 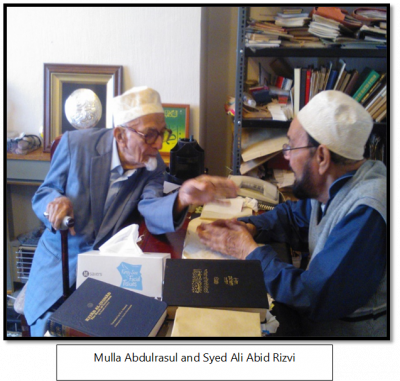 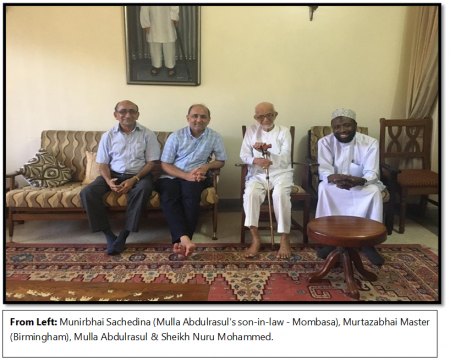 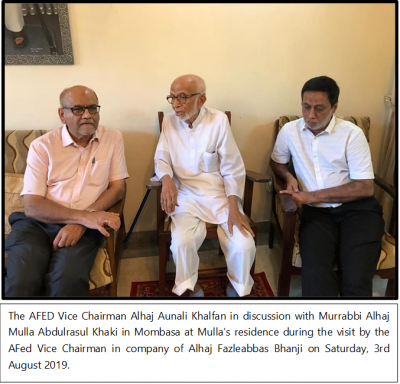 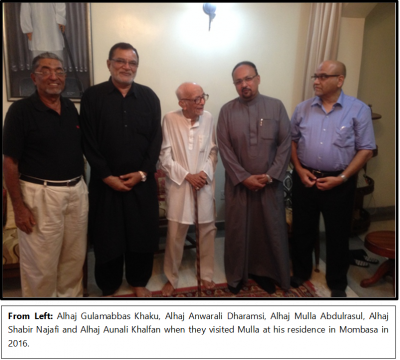 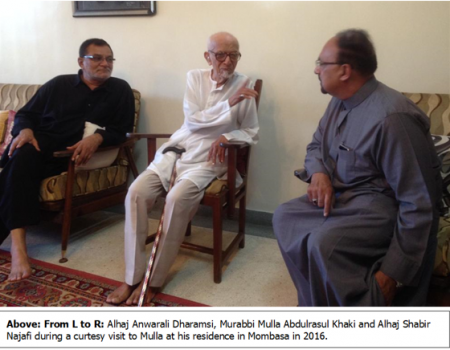 Reference: TRIBUTE TO A LIVING LEGEND

Obituary by The Africa Federation Secretariat

The Africa Federation Secretariat received with sadness the news of the passing away of Alhaj Mulla Abdulrasul Mulla Hassanali Khaki in Mombasa on Wednesday 28th July 2021 (17th Zilhajj 1442 AH) and was buried there on the same day. Marhum Mulla Abdulrasul, well known by his deserving title of Mulla was an iconic figure of Mombasa Jamaat and a shining example of how an individual can leave a lasting impact and footprint by dedicating his life in service to the community, maintaining Islamic values and promoting Shia Ithna-Asheri faith.

Mulla was born in Mombasa on 15th March 1926, and had a special interest in Islamic History and Fiqh since from a young age and he sought the company of Ulema to further his knowledge. Marhum was one of the first teachers of the Huseini Night School Mombasa when it was established in 1944, under late M. M. Jaffer. In 1956, he became the deputy when late H. M. Nasser took over as the Head Master following the death of Marhum M. M. Jaffer. Few years later, he became the Head Master of the Huseini Night School where he continued serving what is now Huseini Madrasah until 2000.

He was actively involved in the Ghusl Kafan Committee and over the years, taught scores of individuals on the related practices and masael. He also held classes on the same for Bilal Muslim Mission of Kenya Mualims from rural areas of Mombasa in Kenya. His role in Tabligh activities of Mombasa Jamaat included conducting Islamic History classes for adults and special masael classes for prospective Hujjaj. His passion for imparting religious education and conducting classes in Fiqh and Islamic history was such that despite his age and medical issues which limited his vision and curtailed his passion for reading, Mulla Abdulrasul was ever ready to conduct classes, even if it was for one student only.

He also played important role in imparting religious knowledge to the women of the Community in Mombasa where in the early 1970s he conducted classes on Fiqh, History and Muaamelaat (dealings) and indulged in interactive discussion with the lady members. In 1974, when Mombasa Jamaat convened a special Open Forum for ladies to review rites, rituals, customs and traditions practiced by the community Mulla Abdulrasul was one of the persons present at this Forum together with the then Jamaat leadership and late Resident Aalim of the Jamaat Maulana Syed Aqa Haider. He was actively involved in match making and was a member of the Marriage Reconciliation Committee. In addition, he was also an effective Zakir delivering Majalis in Gujarati and on several occasions travelled to Madagascar and to Paris during Muharram and Safar.

Marhum was bestowed various Awards and Recognitions for his vast contribution to the Community, they are: • Citation by KSI Jamaat of Mombasa

Message from the Chairman of Africa Federation (Alhaj Shabir Najafi)

The sad demise of Mulla Abdulrasul Hassanali Khaki has robbed Mombasa Jamaat and the Community of one of the prolific, sincere and dedicated member who served all his life for the Community’s spiritual and social wellbeing. As a teacher and a scholar, he imparted Islamic History, Fiqh Masaels, Qur’an, Diniyat, and the Madha’b of Ahlulbayt (AS) to scores of students, young and old. He was always available to give guidance to the Jamaat, individual members and on several occasions to Africa Federation whenever required. Mulla was a source of enlightenment and a beacon of light who illuminated the hearts and souls of many during his lifetime. Sadly, Mulla has left this transient world on 17th of Zilhajj for a permanent abode.

Whilst we celebrate the auspicious anniversary of Eid-e-Ghadeer, the declaration of the Wilayah of Ameer ul Momineen Imam Ali ibn Abi Talib (AS) we also mourn the deaths of two prominent scholars of our community in Africa, Marhum Alhaj Sheikh Hassan Mwalupa and Marhum Alhaj Mulla Abdulrasul Khaki. May Allah (SWT) grant them maghferat and a lofty station in the proximity of Ahlulbayt (AS), Ameen.

The Vice Chairman of Africa Federation, Alhaj Aunali Khalfan during his visit to Mombasa in August 2019 had an audience with Murabbi Alhaj Mulla Abdulrasul Khaki, he recalls amongst the discussion with him was in regards to the Madressahs in Africa, particularly those being managed by our Jamaats. Mulla expressed his deep concern and gave this advice – “Please ensure that the number of days of Madressahs (both for boys and girls) in our Jamaats are increased to twice or thrice a week and that the Holy Qur’an must be included in the Madressah Syllabus and taught with meaning and understanding”. This important message and advice from Marhum Mulla was communicated with the Jamaats through AFTAB, we trust that appropriate steps had been taken to implement them.