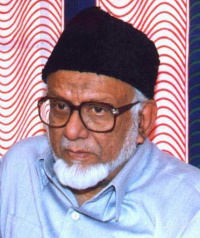 Mulla Asghar was the first president of The World Federation of Khoja Shia Ithna-Asheri Muslim Communities. Born in Mombasa, Kenya in November 1937, Mulla Saheb was the eldest son of Mulla M M Jaffer. A self taught man, he was internationally recognized by the ‘ulama and the public for his depth of religious knowledge and personal piety. A prolific writer and an outstanding orator, with a very approachable personality, he always had time for anyone, young and old, who approached him for any reason whatsoever. Fluent in Arabic, English, Farsi, Urdu, Kiswahili and his mother tongue of Gujarati, he was equally at ease communicating with scholars, intellectuals, poets and the learned from any corner of the Muslim world, as well as retaining the common touch with the man in the street

For the last two decades of his life, Mulla Asgher lived in London, England. However, during his youth, he was active in a number of social activities including school debates where he often led his team in inter-school debating competitions. In addition, he showed great interest in the educational welfare of students as he devoted his free time to coaching classes for primary and secondary students.

In 1963, Mulla played a pivotal role in launching an aid campaign (Zanzibar Relief Fund) to provide assistance to the victims of the aftermath of the Zanzibar Revolution. He witnessed firsthand this uprising and was personally involved in assessing the plight of the people. Crisis for the Community were apparently not few and far between. After Zanzibar, there were problems in Zaire, Rwanda, Burundi, and Madagascar - culminating in the mass exodus of Asians from Uganda in 1972. All in all, the Africa Federation played a vital and often silent role. Throughout, Mulla Asgher, in his capacity, either as Hon. Secretary, Vice President or as the President of the Africa Federation, was at the helm of such endeavors.

During the period from the 1980’s and beyond, when Islam within the UK and elsewhere in Europe was often depicted as adversarial and threatening, Mulla Saheb was able to present Islam to Muslims and non-Muslims alike, in a manner that brought understanding and accommodation between people of different faiths. History will judge this profound role, of spreading the message of the Ahlulbait (a.s), as a force of good at a time of major uncertainty due to the distressing displacements of our own community from Uganda. This displaced and deprived community settled in Europe and North America; an event that may prove to be of benefit in the Islamic religious awakening in the West. The displaced Khoja Shia Ithna Asheries from Uganda arrived in the UK in 1972 carrying very little with them. They had to leave behind much of what they had owned. They were soon facing new challenges in their new environment. It was here that Marhum Mulla saheb’s presence in Europe provided the necessary guidance and direction to progress. Imambadas, masjids and madressas needed to be established at a rapid pace in order to prevent unislamic influences to creep within and divert our vulnerable community members. Work to this end began and soon centres at Peterborough, Birmingham, Leicester and 9 London (Hammersmith) were acquired which functioned as Imambaras. That was just the beginning.

Marhum Mullasaheb’s leadership did not limit itself to the Khoja Shia Ithna Asheri community in its services. Many Shia Ithna Asheries from India, Pakistan, Lebanon, Iran and Iraq settled in the UK, found themselves faced with similar problems as our own community. Through the WF, he helped many such communities to set up centres that have become the nucleus of their own community. Many centres now exist in London, the Midlands, Lancashire, Yorkshire, Edinborough and Glasgow. He did not stop just at Shias. He was instrumental in advocating co-operation with all Muslims. Under his leadership, the WF has become a national member of the Muslim Council of Britain and is playing its role in dealing with problems and injustices faced by all Muslims. And, he did not draw the line at Muslims either. He became involved with Interfaith, a group that has representatives from all major faith groups in the UK. Today, because of his timely guidance, the WF is recognised as a key Muslim organisation in the UK.

Under his leadership, the WF assisted in setting up numerous Islamic centres. It is not bold to say that his leadership has gone some way in keeping our own community united and has helped us pave the way for establishing links with other Shia communities. For, the WF has become involved and has co-operated with other Muslim organisations and it has affiliated with groups that represent all types of religion to explain the message of the Ahlulbait (a.s) He became a beacon amongst many in the West for rekindling the Islamic faith from within the Muslims, consolidating and then entrenching a spiritual foundation based on the teaching and direction given to us by the Holy prophet (s.a.w). As a result, one observes the presence of an Islamic identity having the soul of Islam within it. This was his legacy to the Muslim community in the West.

Following the horrid experience of 4 months of his confinement in Iraq along with his wife, Mulla applied himself to bring up a new breed of Western educated religious instructors to impart religious education to our children. His sermons in English preceding the Urdu talks and the various lectures in English and Gujarati speak for themselves. He also conducted various refresher courses for potential Madrasah teachers

Addressing the KSIMC leadership in 1991

In 1991, the KSI Muslim community was under immense pressure. Our community in Somalia needed rehabilitation. The poverty of our community in Gujarat needed to be addressed. The Muslim communities were facing geo-political challenges and the globalising economic and political forces were on the march bringing their own uncertainty to our KSI Diaspora. The community needed leadership and direction. The WF had called an extra ordinary conference to elect the President of the WF and chart out the way forward. In his speech, Marhum Mulla saheb lay down stark realities facing the community and a wakeup call to guard against forces that intended to disunite the community. It is a telling narrative that resonates with our present circumstances also. (Dr Sibtain Panjwani)

An obituary by The Guardian.com

When Uganda's Asian community was expelled by Idi Amin in 1972, 5000 Khoja Shia Muslims were among the arrivals in England. It was the beginning of the presence of the Khojas in the west. Within four years, Mulla Asgharali Jaffer, who has died aged 62, had become the driving force in setting up the headquarters in London of the World Federation of Khoja Shia Muslim communities, of which he was the first president. The Khoja Shia exemplify the dynamic diversity of the Shia tradition, often seen in the west as simply Iranian. Largely self-taught, Mulla Asghar, as everyone knew him, was renowned in the Muslim world for his learning, piety and charitable work. The Khoja are concentrated in Pakistan, India and East Africa, but there are now sizeable communities in Britain and the United States. Converts from Hinduism in medieval Gujarat, they first embraced the local Ismaili Muslim tradition, then in the late 19th century acknowledged - with steadfast loyalty - the authority of the senior Shia cleric in the sacred city of Najaf, in Iraq. As federation president, Mulla Asghar harnessed the community's entrepreneurial spirit, working particularly on charitable projects, including educational schemes in Africa, and medical and housing projects in Bombay. In Britain, a main centre was built at Stanmore, Middlesex, and there were many others. Money was raised for disaster relief.

Mulla Asghar was born and educated in Kenya, and ran his father's optician's shop in the old town of Mombasa. By the late 1960s he had set up a large and famous optics factory in Nairobi, meanwhile becoming head, first of the Mombasa Shia community, then of the African Federation of Khoja Muslims. Plain-spoken, courageous and sincere, Mulla Asghar was formidably learned, and he was fluent in six languages - English, Arabic, Persian, Urdu, Kiswahili, and his native Gujarati. In 1983, he visited his friend and mentor, the spiritual head of the Shia, Grand Ayatollah Al-Khoei, in Iraq. Preparing to leave the country, he was arrested and spent three months in a Baghdad jail, where he was tortured before international pressure forced his release.He is survived by his wife, Sakina, and four children. Mulla Asgharali M M Jaffer, religious and community leader, born April 14 1937; died March 21 2000

In this book, reflecting on the life and times of Mulla Asgharali M.M. Jaffer and his contribution to the developement of the Khoja Shia Ithna-Asheri Muslim Community, an attempt has been made to recall the early history of the evolution of the Khoja community and the problems it encountered, especially in the past sixty years. Sections are dedicated to the history of the Khoja, their roots, events leading to their current state, tabligh, retaining the Khoja identity, the aftermath of the Zanzibar revolution, the Asian exodus from Uganda, formation of the World Federation as well as to the delicate current issues of Khums and Ijaza, choosing the right kind of leaders and the socia-religious challenges facing the current and next generations of Khojas worldwide. A section of the book is devoted to reproducing the novella I was Saddam's Prisoner, which is a personal account of Mulla Asghar and wife's incarceration.