Since severing the umbilical cord with the mainstream Aga Khani Khojas which propounded Nizari Ismaili faith, the new splinter group of Khoja Shia Ithna-Asheris in India were busily engaged in several fronts to identify, consolidate, and strengthen the infant community. The rivalry and confrontation between original and splinter group was rampant, occasionally violent and very often showed its ugly head in social mercantile activities of both the communities. The first pressing task of the leader of the Khoja Shia Ithna-Asheri community was to establish and widen network of Jamaats and with it Mosques, Imambarghas, and Madrassahs had to be acquired or built. To an acceptable degree this was achieved between 1880 and 1933. Under this climate the Khoja Shia Ithna-Asheri community labored with a dream: to establish a federation that would unite the community. This was the vision of Seth Dawood Haji Nasser who created the Cutch Federation but due to the War, it was still-born and picked up its root in Africa where it flourished progressively. 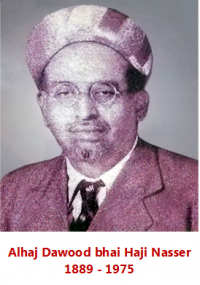 Seth Dawood Haji Nasser was among the most active Cutchi Khoja merchants of the time. He had far flung business with branches in India, Burma, Japan and Africa. The first “All Khoja Shia Ithna-Asheri Conference” was held in Mundra, Cutch on 7th-9th November 1933 (Hijri Rajab 1352 A.H.) under the Chairmanship of Seth Haji Dawood bhai Nasser. The Honorary Secretary of the Conference was Seth Hassanali bhai P. Ebrahim and the Assistant Secretary was Haji Roshanali Dawood Nasser. Fifty-two delegates from fourteen centers of Cutch and four invited guests participated. The Chairman and his party, which included Seth Ismail bhai Karim Panju, Seth Hasham bhai Sachedina, Seth Fazal bhai Bandali, and Seth Ramji Mawji bhai, arrived by car from Mandvi at the Jamaat center and were received by elders of the Jamaat at the gate. The Conference session commenced in the Imambargha Kushade Hall donated by Seth Dawood bhai Haji Nasser in memory of his late father. The opening session was well attended and the hall was filled with the visitors. The following Khoja Jamaats were represented: Bhadil, Bharapur, Bhuj, Jarpara, Kapaiya, Kera, Nagalpur, Lakdia, Lakhapur, Mandvi, Mundra, Samagoga, Sinugara and guests from Mumbai.

On behalf of Seth Ladha bhai Valli, Conference Reception Committee Chairman, Seth Musa bhai Jaffer welcomed the delegates and the guests and drew attention of the Conference on the need for the unity of the community. He emphasized the need for social and religious reforms and education in order to achieve economic, social and religious upliftment of the community. To facilitate education of the students there were community boarding houses in Jamnagar, Mahuva and Rajula, but there was none in Cutch. He therefore appealed to the community to pool its resources to build one. In his opening address Seth Dawood Haji Nasser fervently emphasized the need to address the question of education in the community, a prerequisite if the community is to stand heads up with other communities. Seth Dawood Nasser said if the conditions were unsuitable in India, then the merchants could migrate to Africa. Since he was having business offices in Africa, he would sponsor them all and let the Federation can take its roots there.

After much discussion, it was resolved that the Conference should be a permanent feature of the community. It was also resolved to establish a boarding house in Mundra, Cutch. Nagalpur Jamaat offered to channel Rs. 10,000 for the orphanage funds to the boarding house project. The Conference passed a resolution for the establishment of The Cutch Khoja Shia Ithna-Asheri Conference. Its objective would be to promote unity, economic, religious and social reforms in the community. Addressing social reforms, the Conference passed ten more resolutions aiming to regulate the reet-rivaaj (traditions and ceremonies) of marriages.

The Conference expressed its commitment to the religious education of the community. Seth Haji Dawood bhai Haji Nasser offered to meet all expenses for the year and Seth Fazal Bandali Ramji volunteered to pay for the second year. Seth Musa bhai Jaffer who was also a Mullah offered services without any remuneration. Soon after the Conference, the economic and political dynamics took over its toll on the initiative. The community activities were in the doldrums during the war years. After the formation of Pakistan in 1947, large numbers of Khoja Shia Ithna-Asheris opted to migrate to Pakistan. In this flurry of activities spanning a period of ten years the Cutch Conference went into oblivion. Today there is a boarding house in Cutch, which found its birth in the said Conference.

The firm of Dawood Haji Nasser & Co which had substantial export and import activities with Japan suffered a major blow during the War. It goes to the credit of Haji Dawood bhai that despite changing times and fortunes his devotion and interest in the community remained undaunted. Soon after the War the dream of a Federation fermented in overseas soil and Africa Federation was born on 10th October 1945. For all that is said and done, no effort gets lost. It only rests to find a new fertile soil to germinate in and bear fruit.

The contribution of Seth Haji Dawood bhai Nasser towards the development and welfare of the community is immense. After his death, Mulla Asgherali M M Jaffer flew to Karachi and recited a Majlis at Mehfile Khurasaan. In the majlis, among many other points, Mulla Saheb reminisced and reminded the packed audience about the major contribution of Marhum Haji Dawood Nasser. Paying tribute to Marhum, he said that Marhum was a pioneer of the Khoja community. He had served as President of the Bombay Khoja Ithna Asheri Jamaat. After the partition of India and Pakistan, he visited Karachi where he fell ill and lost his eye sight and instead of flying back to Mumbai he went to Iraq.

In recognition of his great contributions, the Karachi Jamaat conferred upon him the title of ‘Fakhre Qaum’ (Pride of the Community). He opened and personally supervised orphanage called Darul Aaman in Karachi and educated the orphans, who are today Vice Presidents of banks and holders of high posts worldwide. Haji Dawood Nasser flew several times to Zanzibar with his eldest son Mohammedali Dawood Nasser to resolve issues between the Naee (New) – Hujjat Jamaat and Junni (Old) – Kuwwat Jamaat. Haji Dawood Nasser had built, behind his mansion in Bombay, a huge Guest House with full facilities to serve any and all guests among whom were Aalims and other families of various denominations, rich and poor alike. The guests, mostly from Africa and India, stayed from a few days to months on end completely free of cost.

During the majlis Mulla Asgher Saheb reminisced that in schools/madrassahs in Africa, suddenly one day the school bell started to ring at 10:30 AM right in the middle of classes in session. There was hustle and bustle as to what has happened. They were told that a holiday was declared as Haji Dawood bhai Nasser was visiting and all lined up to receive him. Haji Saheb used to donate huge amounts to meet the expenses of the schools and madressahs. Mulla Saheb ended his majlis by saying that it was not possible to do justice in mentioning the contributions of Haji Dawood Nasser in a short majlis. 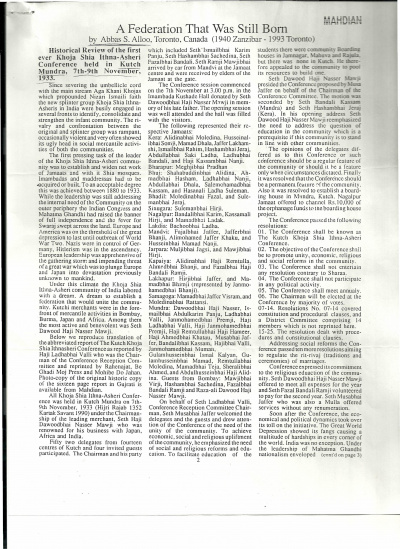 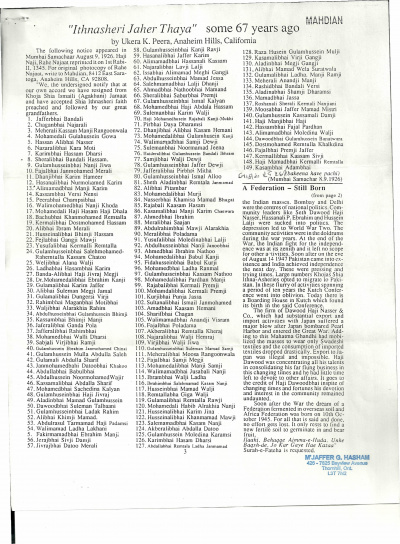