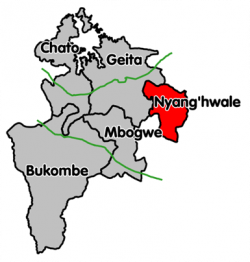 The settlement of Khoja community in Kharumwa started during the German rule in 1900’s. The pioneers were Nasser Virji family who started wholesale and retail shops in Kharumwa. This attracted many of our brothers to settle in Kharumwa. Nasser Virji Company employed many of our Khoja brothers. In 1920 a plot was acquired to be used as burial ground (kabrastan). There are about twenty graves in that graveyard. Later on, a hall was constructed using mud, bamboos and corrugated iron sheets. The cost of this hall was contributed by the Khoja brothers of Kharumwa. This hall was used as mosque, imambargah and Madressa.

Kharumwa is situated in a very fertile land and the locals are traditionally farmers. Agricultural produce like peas, gram seed, chick peas, moong, mustard, wheat, rice and cotton were produced in large quantities. The livestock and dairy farming produced ghee in big quantities and was marketed all over Tanzania. 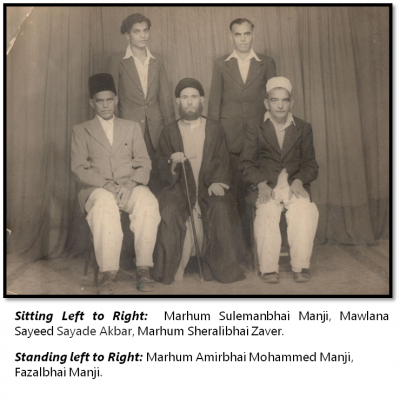 Nasser Virji Company advised our brothers to engage in business of buying agricultural and dairy products. At that time, most of the agricultural produce was bought by our brothers and sold to Ladha Meghji and Company in Mwanza. Most of our brothers in Kharumwa were buying their goods for business from Suleiman Manji Brothers Company, on credit. This helped our brothers who had no capital to run their businesses. Kharumwa Jamaat was run by Suleiman Manji who was President and Treasurer of the Jamaat. His secretary was Hassanali Abdullah Dhirani. After Suleiman bhai Manji, his brother Fazal Manji became President and Treasurer and Gulamabbas Ladha Damji was the Secretary. Kharumwa Jamaat had also built a primary school called Indian Public School. This was in 1950’s. Three teachers were employed; Ebrahim Master, Daya bhai Patel and P.Z. Shah. They were staying in teachers’ quarters. The school also had a volleyball ground. In 1959, Kharumwa team participated in Regional tournament held in Kahama, Mwanza region.

In the year 1961, Gulamhussein Ebrahim built the mosque with two shops. The shops were rented and the income was used to support Jamaat expenses. Around Kharumwa there were several villages where our brothers had shops and they used to come and join the Muharram and Ramadhan majlises.

Our brothers used to reside in the following villages:

During the rainy season, the roads between Geita and Mwanza were flooded, sometimes totally impassable, for several weeks. Kharumwa did not have electricity and water supply. The residents were using lanterns as a source of light. For water they had to employ a man to bring water from a port on Lake Victoria called Nyamtukuza, which was at a distance of 18 miles. Donkeys were used as a means of transport to carry water drums. Rain water was harvested and stored in drums. In 1953, British government dug water wells which eased the water problem to some extent. In 1959, when Marhum Ebrahimbhai Sheriff Dewji (then Chairman of AFED), visited Kharumwa to raise funds for education and tabligh foundation, he was able to raise the amount of Shs 16,000. At that time, there were about 15 families at Kharumwa.

In Mwanza Region there were several villages where our brothers had shops.

Aalims, Mullas and individuals who provided religious services to Kharumwa Jamaat are: