The tradition of holding Hussein Day started in 1940’s in Zanzibar, Mombasa and Dar es Salaam. The aim was to propagate the message of Tragedy of Karbala and the mission of Imam Hussein (A.S.) to the general masses. The venues selected were always outside our Imambarghas where maximum participation of the general public is achieved.

In Zanzibar the first Hussein Day was held in Victoria Garden under an ad-hoc committee appointed by the Jamaat. The Hussein Day was attended by high government officials, diplomats, non-Muslims and Muslims of all denominations. The speakers were mostly outsiders who presented their views about the Kerbela tragedy. This was a unique way of propagating the message of Imam Hussein (A.S.) outside the community. In Zanzibar the chief guest was always the Sultan of Zanzibar. The popular venue was Portuguese Fort at Forodhani which exists till today.

In Mombasa the venue was Ithna Asheri Sports Club, organized by Ithna Asheri Young Mens` Union. In 1952, the Governor of Kenya, Sir Phillip Hitchell was the chief guest. Many dignitaries attended the program. Hussein Day used to be a very important annual event.

In Dar es Salaam, the first Hussein Day was held in 1945, on the open ground outside present mosque. Later in 1948, a building was built by Kanji Damani on this plot and the venue was shifted to Bohora School on Ring Street (Now Jamhuri School on Jamhuri Street). In 1960’s the Hussein Day was organized jointly by all the Muslim Communities jointly under the name of “All Muslim Hussein Day Society”. Alhaj Mohamedbhai Dhirani served as Hon. Secretary for many years under this Society.

Small towns like Kigoma, Mwanza, Bukoba, Lindi and other respective Jamaats were also organizing Hussein Day in 1950’s during the pre-independence period and continued for some time in post-independence period. In smaller Jamaats in Tanzania, due to migration of members to bigger cities like Dar Es Salaam, Arusha and Mwanza the tradition of Hussein Day has stopped in the smaller Jamaats. However, some Bilal Muslim Mission Centres in Tanzania, Kenya and Uganda are organizing Hussein Day in their districts and villages. 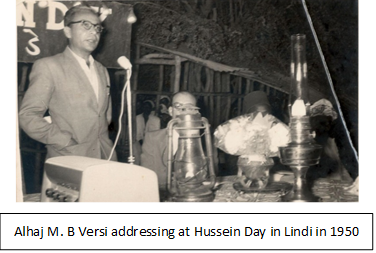 UNDER THE ITHNA ASHERI YOUNG MEN’S UNION OF MOMBASA JAMAAT 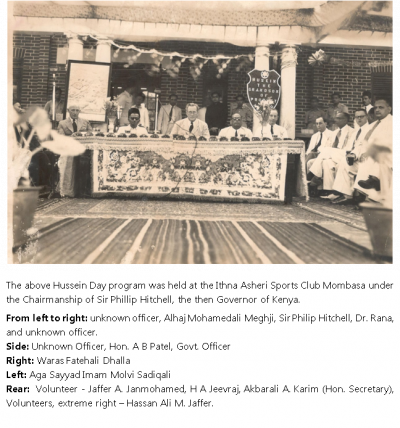 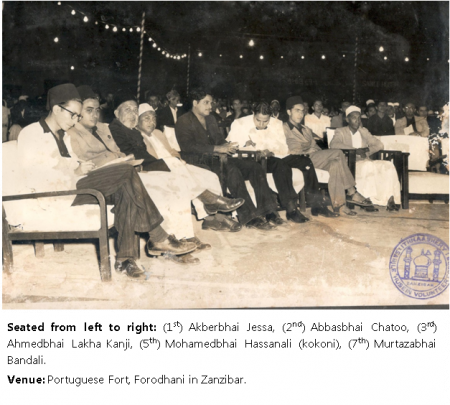 The venue was our present Imambargha terrace before the vertical extension, this continued for several years. Hussein Day became more popular and continued to grow under the patronage of IUVC. Hussein Day was well attended by high ranking Government officials, Diplomats, Dignitaries, Leaders from various Communities, Religious Leaders, Sheikhs from different Mosques and Religious Institutes and students from Madressahs and the general public. 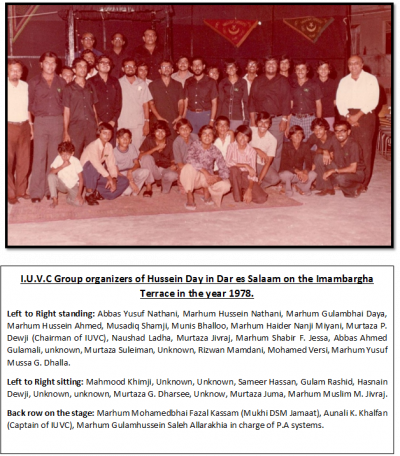 Photograph taken after the program at the terrace of the Imambargha 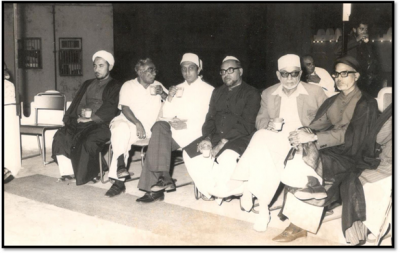 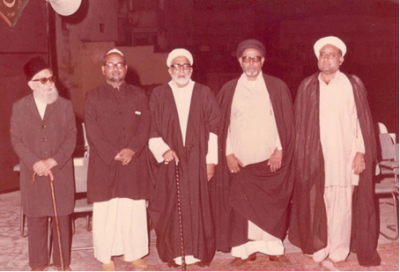 Below: the well attended Hussein Day with guests from different communities, dignitaries including our brothers in Dar Es Salaam. 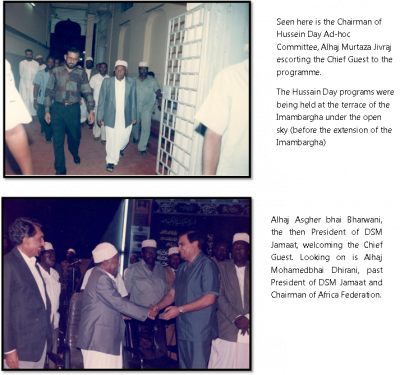 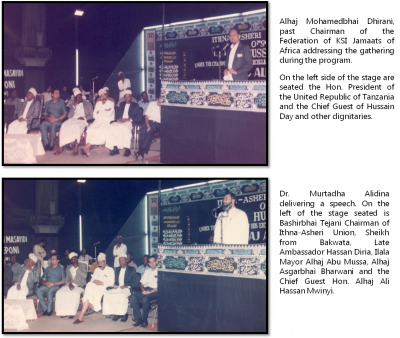