History of the name ‘Golo Saleh’

In the annals of Zanzibar Khoja Ithnashri history, the name ‘Golo Saleh’ (Gulamhussein) gets inscribed with golden letters. He was born to the family of Saleh Allarakhia (Saleh Madawa) whose spices/herbal medicine shop in one corner of Vaddi Bhajar (Hurumzi) was a household word. Such was its impact that to date shops dealing in herbal medicines in Zanzibar is referred to as ‘Saleh Madawa’.

Interestingly Ithnashri zealots of yesteryears in Zanzibar nicknamed their sons ‘Golo’ out of fervency and devotion to their Imams. Incidentally, Gulamhusseinbhai was born on the day of 10th Muharram (Ashura). His devotion to azadari and pioneering feats in the services of the community were some of the contributory factors to the popular acclaim Zanzibar had attained as the staunchest in the Khoja World. No doubt the name ‘Golo Saleh’ remains synonymous with Zanzibar’s spectacular Matam Njiani (Julus), Khushali Bankro, Husain Day and any community-related event since the days of 1930s. The scene wherein the ‘Zuljanah’ in all its majesty was being brought out to the accompaniment of Golo Saleh has had an everlasting impression of Zanzibar julus on old-timers.

His Presence as a Maalim

His presence at the Night School Fez where he was a ‘maalim’ exuded discipline and made him a role model for the youths. Mostly seen in coat and red tarboosh cap he projected an imposing personality. Recording majlis/marshia/nauha was a passion with him and his shelf stacked with his collection of tap spools. The visits to Zanzibar by Allama Rashid Turabi, Abbas Rizvi and several others had an overwhelming effect on the islanders and Gulamhusseinbhai covered on his tape recorder all their majlises which were later relayed at the Taziakhana at night continuously amid the huge gathering. 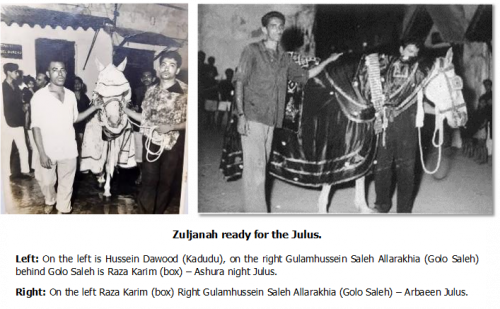 Photographs by courtesy of