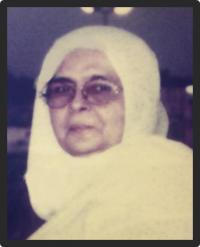 The demise of an iconic lady, Hamidabai Pyarali Manji in India on November 11, 2002, had left people across the world crying even though people had never met her. She was an icon; people were used to her image everywhere. She had created a special bond and people were very saddened by her death. After her death, I thought of the icon that Hamidabai Manji (Maalim-Mia) had been for this community. She had always been there!

It was second nature and totally expected and accepted to have her presence booming at any major community event. Furthermore, days of Muharram, Ramadhan, Khushyalis, etc. were unthinkable without her. It just felt ‘right’ when she and only she was there for certain functions such as leading the matam on Sham e Ghariba night or controlling Hazrat Abbas’s Alam, not to mention her famous Qasidas on days such as the Wiladat of Imam Ali (A.S). As I was used to always seeing her around, the idea of her not being there was creating a sense of loss. But as deeper thoughts and memories of personal encounters with the lady kept revolving in my mind, I understood there was much more to Hamidabai’s loss than the simple explanation of having been used to the icon that she was.

My major memories were of the trip with her to Karbala, as is the case with majority of the people who felt close to her. She had, after all, been Imam Hussein (A.S)'s guest and zawar 54 times, and every time she took with her a large group of people. The service of facilitating and serving Imam's zawar is probably the highest status one can achieve and her repeated ability to do so with a clean and pure heart is in itself enough to gauge her status and the core self that was she. As Zakira Fatim Dewji said in the Ziarat majlis to remember Hamidabai on November 12, 2002, in Dar es Salaam, money is not an issue when it comes to being able to reach Karbala to salute the Holy Imam. Imam has to call one so that one can reach there. Many people, she said, are filthy rich and some live very near Karbala but have never had the honor of reaching Imam Hussein (A.S)'s grave, an act immeasurable in reward and blessings. That Imam repeatedly called Hamidabai to visit him says enough about the woman. My own memories took me back to the days of her great friendship and association with my own mother, who served with her the guests of Imam in Karbala until Allah (s.w.t.) recalled her two years back. I remembered the personality of the woman who on one hand, was no less than an iron lady of our own, getting easily through the harsh security of the Iraqi regime, dodging or coming through tough barriers when not even men dared consider such fates. This was a tough time soon after the Gulf War but not much would fail her and keep her away from the beloved land of Karbala.

Serving Every Member of Community

And yet there were the light sides of her that I witnessed in my mother’s company when she would have us roaring with laughter with jokes and stories of her experiences. The major attraction of the woman, I had come to realize, was her total sincerity and clean heart when it came to both, serving people and the love of Ahlulbayt (AS).

“Her ehsaan is on every member of this community,” said Zakira Dewji for there was no place in the Khoja world where she wasn’t recognized for her majlis and nawha/marshiya services. The deep love she had for community members everywhere made it second nature for her to awaken any time of the night or day to assist anyone who needed any emergency service. Her influence made her the person who always came through for any community member who found himself or herself stuck in a sticky situation. It was elaborated how she used to manage to get large and adequate amounts of food items for ‘nyaz’ when strict rationing was going on in Tanzania. She managed the same for electricity services during majlises when the country was plagued in darkness. She was, basically, on her toes all the time for the service of the followers of Ahlulbayt (AS).

“Our eyes will search for her on mimbar and we'll long to hear her famous voice but alas, we shall not see her again,” said the head of Dar es Salaam Jamaat’s Zaakiras, Batul Damji on behalf of the Ladies Managing Committee (LMC). Her voice cracking with emotions while a huge crowd of majlis attendants tried in vain to hold back tears, Batul bai said Hamidabai was among the first supporters of LMC when it was formed and that support was on until her last days, spanning about 20 years of service. She needed no introduction since every child and adult knew her too well and she had also initiated the Ziarat groups service. “Her voice was magical,” she said and indeed her loss was the loss of the entire community.

Hamidabai was also well acquainted with our Marja-e-Taqleed Sayyid al Seestani and her word was well trusted and accepted by him. For such a lady, the deep pain in our hearts at her loss and tears in our eyes can simply not be for a simple vain reason of having been used to her presence. She was a lot more than just a popular image, she was an exceptional example to this community especially the women.

Her inspiration for being able to conquer any situation ‘despite’ being a woman, proving the strength and ability women possess isn't lost with her. This inspiration has, and always should, stay in the minds of our young women. If Hamidabai could beat all the guys to get us electricity when the ‘guys’ consisted of rich, popular, influential male members of the community, why is it that we, other women of this very community stop short of pursuing great heights for the mere fact of our gender? Nah, the strength our iron lady has shown us must not disappear from our minds and walks of life. That would be a real tribute to her.

It seems totally unreal to actually accept that Hamidabai is gone forever from amidst us and it will certainly take us ages to stop expecting to see her well-known image. But her spirit will always remain in the very breath of this community. May Allah raise her status and rest her in the vicinity of Imam Hussein (A.S.) and the Martyrs of Karbala, whom she served her entire life.

A Tribute by the Vice-Chairman of Africa Federation, Alhaj Aunali Khalfan

“Hamidabai (Famously known by the name of Hamida Maalim-Mia) was a beacon of inspiration of Azadari of Sayyid al-Shohada Aba Abdillah al Hussain (A.S.) and of the Martyrs of Karbala”. Originally from Zanzibar, daughter of Alhaj Mohamedjaffer Rashid Nathani (Maalim-Mia), a renowned teacher (Maalim) of School Faiz (Madressah in Zanzibar). Hamidabai started reciting Nawhas, Marshiyas, and Majlis from a young age, she had an enthralling voice alluring many ladies in following her wherever she went for recitation during the months of Muharram and Safar. The Saf-Matam in ladies would be incomplete without her eloquent and heartrending Nawhas in Urdu and Persian reverberating in Imambargha and Mehfil-e-Abbas (A.S.). Her noble services to the community shall be cherished for many decades to come, her departure from this world has left a big vacuum which is not easy to fill, especially her dynamic, jovial and helpful nature is missed by many till today.

Personally, I had the opportunity to travel with her on Ziyarat trip with my family to Iraq and Syria on few occasions, once we were stranded in Amaan, Jordan while transiting from Baghdad to Damascus during the Iraq/Iran conflict, I was stunned by her courage and her communication skills with the Airline, Immigration and Border Police officers which helped us making our way to Damascus and by the grace of Allah (S.W.T.) we performed the Ziyarat of Damascus when many Zawars, unfortunately, could not make it and had to return to Dar es Salaam via Dubai.

We are encouraged by her two offspring, Sister Farha Dhalla and Brother Alijawad Manji both are actively involved in social and volunteering services in Dar es Salaam, following their mother’s footsteps. Eighteen (18) years have passed, her memories and amiable nature are still reverberating with many who knew Hamidabai Maalim-Mia.