The Legendary School Faize of Zanzibar 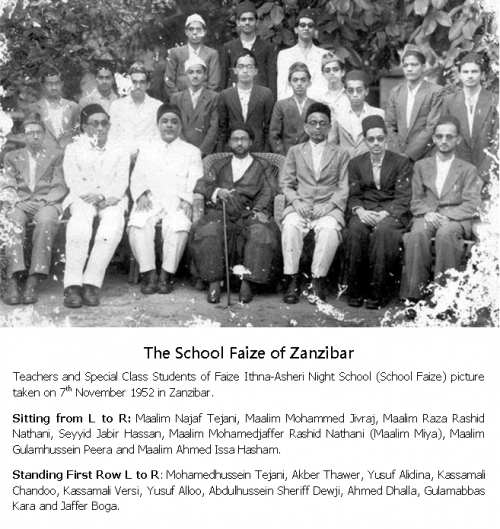 The Pioneers of Faize Ithna-Asheri School

The renowned Zanzibar Faize Ithna-Asheri was established in 1926 by Haji Hussein Sheriff Dewji, Mulla Esmail Gulamhussein, Haji Abdulhussein Rashid Nathani, Haji Abdulrasul Nasser Bhalloo, Haji Abdulrasul Alidina Saleh, Haji Mohamedtaki Gulamhussein Versi, Haji M D Kermalli and Haji Hussein A. Rahim. The organization (Faize) was established for the purpose to help the widows, orphans, the sick and needy members of our community in Zanzibar. One of the aims was also to run a night school providing religious education to the boys.

The school adjacent to the KSI Jamaat Mosque was operational up to around 1960. In 1958, the heirs of Al-Hajj Dharamsi Gangji constructed a school building at Kiponda Street behind the KSI Imambargha at a cost of Shs 150,000/- and donated it to the school which was operated by a committee under the KSI Jamaat of Zanzibar. The school was shifted to new school building around 1960 and continued thereafter for a few years. Later, day time secondary school was established in the same building known as Kiponda Continuation Classes and the first Principal of the school was Mr Hassan G Dharsee, who is presently residing in New Jersey, USA. This was before the school was taken over by the Ministry of Education of the Government of Zanzibar.

(More info on the School can be read here: http://khojapedia.com/wiki/index.php?title=Dharamsi_Gangji)