It is believed that our community started settling in Dar es Salaam, Tanzania (formerly Tanganyika) around 1875 when there were two Indian families at Mji Mwema, outside Dar es Salaam. In 1900, an Imambara was constructed from corrugated iron sheets at the plot which is currently occupied by Pirbhai Jiwa Bharwani building on Mosque Street. Majalis were held at this place but due to inconveniences and upon advice from the German authorities, it was transferred behind Telephone House (Kaluta Street).

The German Governor knew that our community was facing problems and that it needed a place of worship. Once in 1904, when he was passing by our current masjid plot (Makunganya Street, presently Indira Gandhi Street), he found Marhum Sachoo Peera and Suleman bin Nasser Lemky standing on the plot. The Governor asked Marhum Sachoo Peera whether he needed the plot on which he was standing. Marhum replied positively and was asked to visit him in Government House the next day when the plot was given to him which he donated to Dar es Salaam Jamaat. 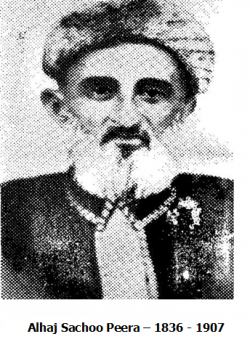 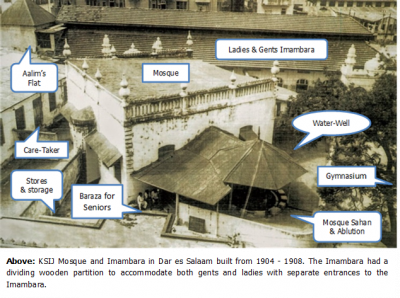 The foundation stone for the mosque was laid in 1904 by Marhum Sachoo Peera. He started construction of the mosque under his personal supervision. However, in 1907, he passed away and his sons, Noormohamed and Abdulrasul continued supervising the construction work. During those days, the practice was to hold the roof with wooden poles called Boriti in Kiswahili. However, Noormohamed Sachoo imported steel structure to use for the mosque. Due to their intense efforts, the mosque was ready in 1908 and the opening ceremony was conducted by the cousin of the Aga Khan, Shah Kuchak. At that time there were 9 families in Dar es Salaam. They were: Haji Sachoo Peera, Haji Nasser Mawji, Haji Nasser Rattansi, Haji Molu Kanji, Nasser Bhalloo, Merali Muraj, Pirbhai Rattansi, Dhalla Nanji and Alibhai Walli. The earliest community workers were a trio - Sachoo Peera, Versi Advani and Nasser Mawji.

The population of our community in Dar es Salaam was very small compared to Zanzibar which at the time had the largest population of Khoja Shia Ithna-Asheries in Africa. 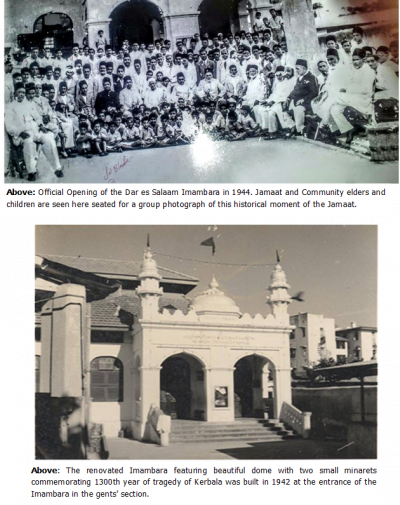 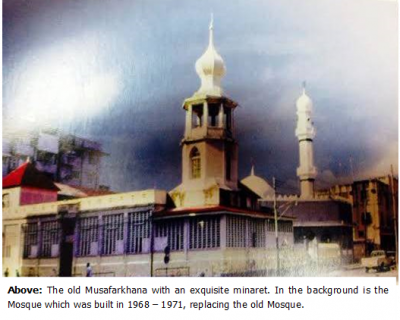 The Imambara was renovated in 1944, commemorating the 1300th anniversary of the Tragedy of Karbala which fell in 1942 (1361 AH). Due to increasing population, the Jamaat decided to construct a new mosque and Imambara in 1968. Marhum Mohamedali Janmohamed was instrumental in encouraging the implementation of this project, collecting contributions from members for the two projects. The new mosque was four times larger than the old mosque.

The collection of funds for the mosque started with a donation of Shs 5000 by Marhum Mohamedali Meghji, Chairman of Africa Federation. Marhum Mulla Asgharali M M Jaffer made an appeal from the mimbar for contributions for the project and Marhum Mohamedali Janmohamed together with Jamaat officials started visiting shops to collect the funds. Marhum Mohamedbaker Somji provided a lot of assistance. The approved tender for the construction was Shs. 375,000 (US$170 at the current exchange rate).

Marhum Noormohamed Jessa laid the foundation stone on 24th Zilhajj 1387 (March 1968). Maulana Aqa Haider Saheb of Zanzibar blessed the opening with the recitation of some verses from the Holy Qur’an. Apart from the mosque, the project involved the construction of a new Imambara for Gents and allocating the old gents and ladies Imambara to ladies. 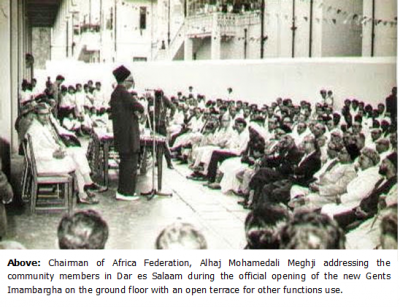 In later years, the gents Imambara was extended vertically and the upper floor was dedicated to Ladies. Further vertical expansion of the mosque and the Imambara were done starting 1990s. Between 2004 to 2010, there was further expansion of the gents and ladies Imambara, including the demolition and total rebuilding of Mehfil-e-Abbas (A.S.) and Musafarkhana with modern facilities. During the same period, a huge plot in front of the Imambara on Indira Gandhi Street was acquired by the Jamaat with the support of the Africa Federation. The open space presently provides various facilities to the growing population of our community and comfortable space for the elders and children who gather in the evening before the Maghrib prayers in the mosque compound. This space is fully utilized during the months of Muharram and Safar, and the Holy month of Ramadhan. 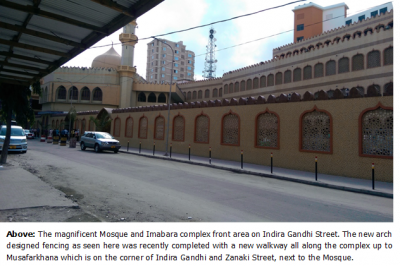 A new addition to the complex is the 300 cars parking lot Sabodo Parkade which was constructed between 2011 – 2015, is a ten-story building on the other side of the complex facing India Street. The Jamaat offices, modern kitchen, Ghusalkhana are also housed in this Building. 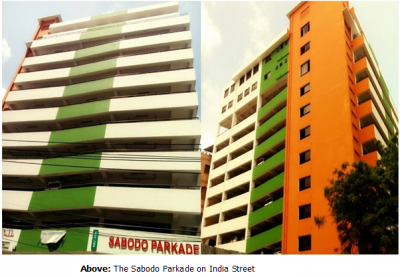 There are a continuous expansion and development of the facilities of the KSI Jamaat of Dar es Salaam. This shows the vibrancy of the Jamaat and its keen determination to improve and provide better facilities and amenities to the community and for its development.