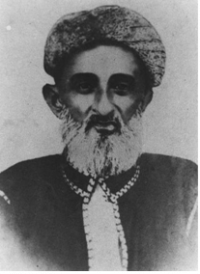 Haji Sachedina Pirani Mawji, popularly known by the name of Haji Satchu Pira, was born in Kutch-Mandvi in 1836. At the tender age of 3 he was orphaned and brought up by his uncle in Zanzibar.

He travelled a lot during his youth. In 1875, he settled in Dar es Salaam which was a village at that time. Tanganyika’s fishing village of Mjimwema was a prominent village where only two Indian families resided; one of them was Haji Satchu Pira. Haji Satchu Pira and his two sons Nurmuhamad and Abdulrasul had excelled in business and had earned a good reputation with the German government at that time due to their community services. Haji Satchu Pira was well known for his simple lifestyle, pleasant personality and sincerity. While returning from Ziyarat, he died in Karachi in 1906 at the age of 71 years. His grave is prominently seen at the entrance of Karachi cemetery.

In 1900 the Imambargha built of iron sheets was situated where the present Pirbhai Jiwa Bharwani building stands. The sermons (majlis) were being held there but due to inconvenience caused; the German government allocated a plot behind the present telephone house where a room was built of corrugated iron sheet for the purpose. Around 1904 the community's honorable elder the late Haji Satchu Pira and Suleman bin Nasser Lemki were standing on the plot where the new masjid is built, in the meanwhile the German Governor passed by, as he was aware of our community facing the problem to hold the religious rituals and gatherings, the Governor then asked the late Satchu Pira, "Do you need a plot to build a Mosque for religious purpose?" to which the late Haji Satchu Pira responded in affirmative, for which the Governor advised him to go to the government house, who was then granted the permit to build. 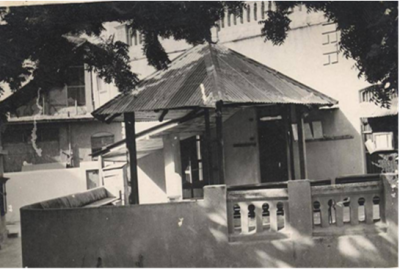 In 1904 Haji Satchu Pira laid the foundation stone of the masjid and personally supervised the construction. He together with his sons Abdulrasul and Nurmuhamad worked with the laborers in carrying stones during the construction work. Sadly, in 1906 he expired, however the half done job was taken over by his sons Nurmuhamad and Abdurasul.

Through their hard work and efforts the construction was completed and the grand opening was performed by the Agakhan's brother Kuchak Shahanshah, during that time there were only nine families living in Dar-es-salaam namely; 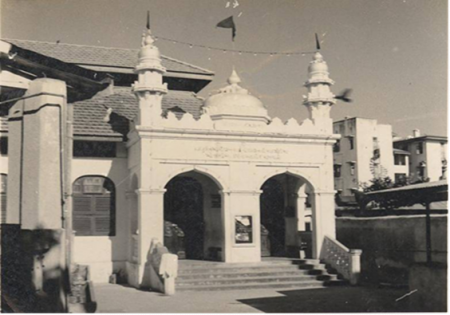 Seen in the photograph above is a replica of a mosque dome and minarets built on the occasion of the celebration of the 13th Centenary of the birth of Hazrat Imam Hussain (AS) and was also being used as entrance to the old Gents Imambargha. 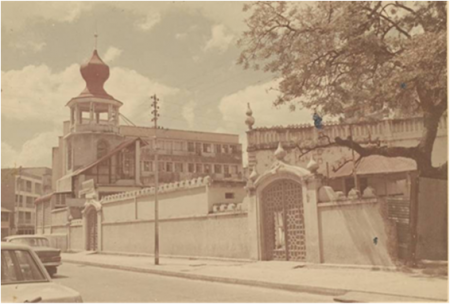 We laud the foresight and vision of our forefathers, much as it was a small community of only nine families at the time, they decided to build such a big masjid which served the Dar es Salaam community up to 1968, these elders had foreseen the future and planned well for the coming generation. The old masjid was built during such a time that mostly the wooden logs (boriti in Kiswahili) were used for roofing; Haji Nurmuhamad ordered special steel rods for the masjid although his own house roof was built with "boriti". For 62 years the community utilized this masjid which had all the required facilities needed for convenience of the believers, we pray to Allah (swt) to shower His blessings and grace un to the donors, the leaders of that time and those who worked along with them, Insha’allah they will be amply rewarded and continue to earn "thawabe jaariah". It is on the same plot where the new masjid was built in 1968 and was extended vertically in 2009 the “thawabe jaariah” is perpetual and the Marhumeen founders and the new donors will continue to receive the “thawab” for their good deeds, Insha’allah. The KSI Jamaat Kabrastan (cemetery) along Bibi Titi Mohamed Road (as known presently) which is located in the centre of the city of Dar es Salaam was also donated by Alhajj Satchu Pira in 1907. 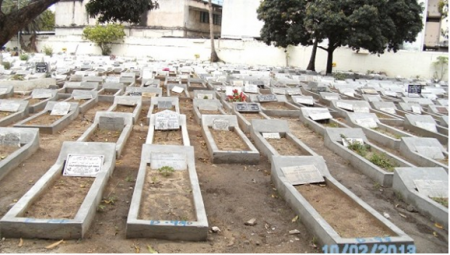 Our community has been blessed with personalities like Marhum Satchu Pira, We pray to Allah (swt) to shower His blessings on our community to have such dedicated and visionary personalities. We should take inspiration from such people - the torch bearers - and follow their footsteps and earn “thawabe Jaariah”