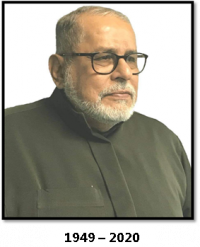 The Africa Federation Secretariat received with deep sorrow and sadness the news of the demise of Alhaj Ashakhusein bhai Mohamedali Rashid (well known as Ashik Rashid) which occurred in Birmingham, U.K. on Wednesday 14th October 2020 (26th Safar 1442 A.H.) Born on 20th August 1949 and raised in Mombasa, he grew up experiencing poverty where during his fledgling years he helped his widowed mother sell home-made food. Together with his brother Sajjad bhai Rashid, they started their joint business in Mombasa which with the blessings of Allah (swt) prospered and grew in size and scope over a period of time.

Marhum’s involvement in the Community commenced in 1976 where he served in various capacities in the Mombasa Jamaat Managing Committee until 1986 when he migrated to Nairobi and was elected the Vice Chairman before being elected as the Chairman of SAAJ (Nairobi Jamaat) in 1987, a position he held till 1992 providing generous support to the Jamaat. He was instrumental in acquiring the land in Lavington for the Jamaat which today houses the Lavington Complex in Nairobi which comprises the Imambargha, Mosque, School, Musafirkhana and the Club. During his tenure as Chairman of Nairobi Jaffery Sports club from 1986 – 1989, he managed to bring the Club into First Division Cricket and the Club became champions of Kenya Cricket Association Tournament.

Marhum played a vital role in organizing the rescue mission and resettlement of the Somalia brethren who were brought to Mombasa from Mogadishu in 1991. He later served as the first Chairman of the Settlement and Welfare Board (SETWEL) of Africa Federation which was established to handle the resettlement of the evacuees from Somalia. Marhum Ashikhusein Rashid was bestowed the prestigious Husseini Medal by the then Africa Federation Chairman Alhaj Habib Mulji for his dedicated and selfless services towards the Somalia Rescue Mission.

Condolence Message from the Chairman of Africa Federation:

“The office bearers of Africa Federation received the news of the death of Ashikhussein bhai Rashid with great sadness. Marhum was a man of vibrant personality and would speak whole-heartedly and passionately in any gathering he attended with his words of encouragement and plans for the upliftment of the Community with his vast experience he possessed through serving the Community at different levels. His sad departure from this world is heart-breaking and leaves behind a huge vacuum in the family and in the society, which he served so passionately.

On behalf of my colleagues and myself we convey our heartfelt condolences to Marhum’s wife, children, brother and all the family members on this irreplaceable loss”. 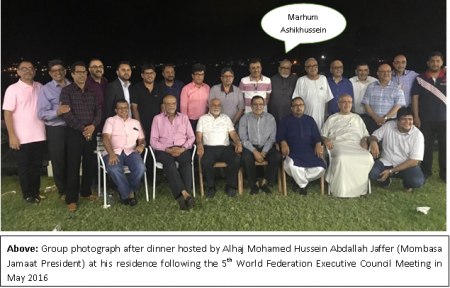