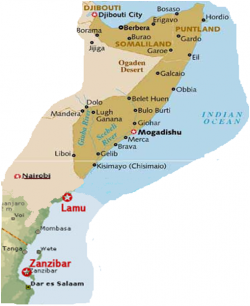 Republic of Somalia lies on the East coast of Africa made up of the former divided British and Italian Somalilands, with an area of 246,200 square miles and a population of 8.2 million. Out of over 1,600 Asians settled in Somalia, the Ithna Asheris population constituted a substantial majority numbering around 1,200 residing mostly in Mogadicio and in the southern port of Merka. The early settlements of the Khoja Shia Ithna Asheri community in Somalia dates back to the year 1881, when two families moved from Zanzibar Island to Merka. Somalia had been ruled with an iron fist by President Muhammad Siad Barre for twenty one years. Rebellion against the regime of President Muhammad Siad Barre erupted with vengeance towards the latter half of 1990. The overall situation was further aggravated by the inter-tribal warfare and widespread civil unrest.

As the situation in Somalia began deteriorating, a stream of refugees of ethnic Somali origin and non-Somali residents started moving out of Somalia to seek refuge in Kenya and in different parts of the world. The cost of living in Somalia shot up steeply as foreign aid dried up. In January 1990, a delegation from the Federation of Khoja Shia Ithna Asheri Jamaats of Africa led by its President, Haji Habib Mulji, comprising of councillors from Africa and the World Federation visited Somalia to assess the situation and put into action various contingency steps to help alleviate the suffering of the community members seriously affected by the astronomical increase in the cost of living.

The delegation was also aware of the deteriorating socio-political condition in Somalia and addressed the possibility of migration of the younger generation. However, events took a rapid and unexpected turn for the worse culminating into an all-out civil war. Soon, the capital city of Mogadicio and its environs were reduced to a complete state of anarchy. By early November 1990, the situation in Somalia looked pretty grim and the Africa Council advised the community in Somalia to send their women and children to Kenya and Tanzania to safeguard against the ramifications of a complete breakdown of law and order. At the same time, the community in Kenya and Tanzania were alerted to make emergency accommodative plans to host the anticipated arrivals.

As a community, Asians in Somalia have been apolitical and they somehow concluded that as in the past the current unrest was a passing cloud. It was generally assumed that regardless of which regime came to power, Asians would not be affected. Even the foreign legations in Mogadicio failed to gauge the magnitude of the gathering storm and alert their respective nationals in good time of the potential danger. By early December 1990, sixty individuals reached Nairobi by commercial flights and were accommodated at the Nairobi Jamaat Musafarkhana. Subsequently it was virtually impossible to obtain a seat on any commercial flight out of Mogadicio.

As the situation in Somalia deteriorated, British, American and Italian Governments ordered an evacuation of their nationals. The Italian Government, in collaboration with the International Committee of Red Cross (ICRC), commenced airlifts with daily shuttle service between Mogadicio and Mombasa. Two batches, one of 17 and another of 24, of our community members reached Mombasa by Italian/ICRC flights. Their report of the situation in Mogadicio indicated that most of the community members living in the outlying residential area had taken refuge in the Shia Ithna Asheri Mosque. Several non Ithna Asheri had also joined them.

In view of the widespread street fighting and shelling, it was not easy for the evacuees to proceed to Mogadicio Airport. Shortage of gasoline restricted movement of vehicles and prospective evacuees had to walk up to four miles to the airport amidst cross firings. When evacuation flights landed there was a general stampede to board the aircraft. It was a question of everyone to himself and the survival of the fittest. When shuttle rescue flights could not land at Mogadicio Airport for security reasons, those who had gathered at the airport had to trek back in the midst of shooting. On the way, several individuals were accosted by armed thugs and dispossessed at gunpoint of personal belongings and cash. Widespread looting by trigger happy soldiers and heavily armed civilians continued unabated.

By 29th December 1990, hostilities erupted in earnest all around Mogadicio. It was a war of attrition with no holds barred. Communication equipment was vandalized and links with the outside world cut off. Mogadicio Airport was closed and Italian/ICRC flights had to be suspended. In a looting spree, during the period, a young girl of the community was shot dead and had to be buried within the Mosque compound.

Thousands of ethnic Somali nationals were streaming across the border into Kenya and hundreds more were reaching the Kenya coast by cargo ships, schooners and sailing crafts. When all looked lost and any communication with Somalia virtually impossible, the community in East Africa was left with the choice of abandoning to fate our people left behind in Somalia or take a risk in organizing a seaborne rescue mission. The idea of seaborne rescue mission into a war zone and the stormy approaches to Mogadicio harbour known for its high waves called for experience, expertise and skill in logistic planning. Time was running out very fast and could not be wasted in protracted consultative meetings.

Sajjad Rashid played a lead and heroic role with courage and at the time even audacity. A passenger cruise ship, appropriately named M/S Ambassador I was chartered for the mission. In a matter of minutes, Sajjad Rashid raised, within the community resources, the emergency funds required to charter the vessel with commitments from Naushad N Merali, Roshan R Merali, Ramzan M Nanji and the Rashid brothers. The spontaneous response of the philanthropic donors spoke highly of their spirit. 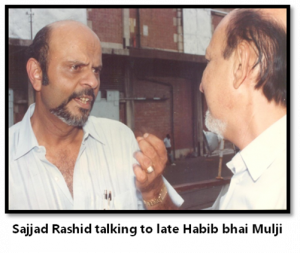 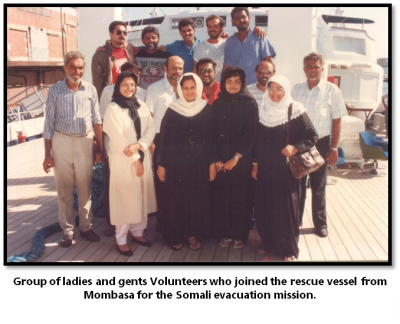 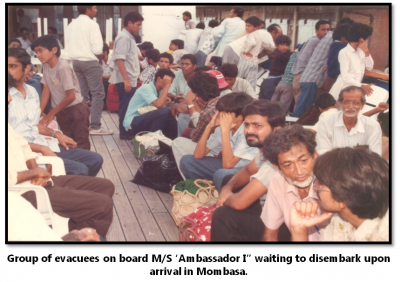 Sajjad worked feverishly to recruit a team of volunteers and 12 males including one doctor plus six female volunteers were enlisted. These were: Dr Mohamed Alavi, Gazenfar Hasham, Murtaza Khaku, Abdallah Kanji, Captain Sajjad Rashid, Salim Khaku, Razahussein Muraj, Kassam Yakub, Ashraf Rashid, Aftab Hussein and Mohsin Ebrahimali. The female volunteers were Mrs. Tahera S Rashid, Mrs. Laila Y Karmalli, Mrs. Kulsum G Khaku, Mrs. Laila H Datoo, Mrs. Kulsum A Kanji and Miss Fatmabai H D Kermalli. Logistical details were worked out and supplies of food, provisions, medicine and ship to shore VHF communication equipment were procured. Endless consultations with the Italian Consulate in Mombasa ensued to pave way for an Italian naval escort near Mogadicio. Meanwhile, Ashiq Rashid with the remaining Committee members did their rounds in Nairobi to obtain the necessary clearance with the Kenya Government, diplomatic coverage from the Pakistan Government and assistance from the Italian Government. Contacts were also established with ICRC and with all possible helpful connections one could think of.

At last, on Thursday 10th January 1991 at 22.00 hrs M/S Ambassador I sailed from Mombasa and arrived at Mogadicio on Saturday 12th, at 11.45 hrs. Sajjad Rashid was on board the vessel and personally led the team of volunteers. On nearing Mogadicio waters, contacts were established with the Italian naval frigate “Storbory” which provided a direct radio link with the Italian Embassy in Mogadicio.

The Italian Embassy advised Sajjad Rashid that the Ambassador was personally negotiating with the Somali Government and the rebels for the safe conduct of our people. Before the conclusion of the negotiations however, at 6.00 p.m. frigate “Storbory” reported to M/S Ambassador I that the Italian Embassy in Mogadicio had closed down and the Ambassador with his staff had since left for Mombasa on the last evacuation flight. Prior to his departure, the Italian Ambassador conveyed a message to the ship that a VHF communication set had been delivered to the Mosque and the community had been informed of the arrival of the rescue mission. With the closure of the Italian Embassy in Mogadicio it was apparent that the two Italian frigates around Mogadicio would not remain in Somali waters for long. In fact, one frigate sailed the same night towards the Persian Gulf. Meanwhile M/S Ambassador I steamed up and down at a safe distance from shore.

On Sunday 13th Janaury, one motorized lifeboat launched from the ship developed engine trouble. A second motorized lifeboat launched with six volunteers on board soon ran aground near Mogadicio Old Harbour. This was the most critical moment in the whole exercise. The six volunteers grounded in the stranded lifeboat on the beach could not return to the mother ship and had to spend the night on the beach huddled together listening to the barrage of shooting. An attempt to refloat the boat during high tide the next morning also failed. On Monday 14th, a feeble radio link was secured between the Mosque and M/S Ambassador I. Meanwhile, two volunteer crew from the grounded lifeboat who knew Mogadicio sneaked their way close enough to establish contact with the Mosque. Simultaneously, clearance for the safe passage was obtained from the rebels as well as the Government authorities through radio contact from the ship.

It was considered unsafe to berth at the port jetty for fear of random shells hitting the vessel and the possibility of being hijacked by armed bands or stowaways boarding. Adding to the dilemma of the two crippled lifeboats, no crafts from shore were available to ferry the evacuees. A stalemate had developed. Among the evacuees, the resourceful Liyakat Alimohamed Remtulla, Bhikabhai Dusara and Nazar Ukera rose to the occasion and procured a port tug and negotiated safe passage to the waterfront. The next day, Tuesday 15th, at 9.00, the first batch of evacuees boarded the M/S Ambassador I ferried by the tug. The tug then took in tow the remaining two lifeboats and the entire exercise of evacuation was completed by 21.00 hours. In a sombre mood of relief, silent prayers of shukrana to Allah Subhana wa ta’ala prevailed on all lips as the M/S Ambassador I sailed through high waters on its way to Mombasa, berthing at Kilindi port on Thursday 17th at 08.45 hours with a total of 1,035 evacuees, 18 volunteers and 103 crew members on board.

A warm and heartfelt reception awaited the evacuees at the docks as they were taken to Haideri Imambara. Of the 1,035 evacuees, 780 were Ithna Asheris. When count was taken of the arrivals, it dawned that about 200 individuals were still in Somalia who had apparently opted to stay behind in Somalia and not to avail of the seaborne evacuation opportunity. As the situation in Somalia worsened, a DC9 and a Boeing 707 were chartered and on the 22nd and 24th of February 1991, 230 individuals including 194 Ithna Asheris were airlifted from Mogadicio to Mombasa. There still remained five individuals in Merka who were content to stay behind to look after their thriving ice-making plant which had escaped the carnage. Ultimately four of them were evacuated in an aircraft chartered by the large Arab community. Still one solitary individual remained in Mogadicio by his free will, ostensibly to keep the flag flying for the community. Thus a total of 1,079 Ithna Asheris and 291 individuals from various non-Ithna Asheri communities, including indigenous Somalis, were evacuated. All arrivals, regardless of race, religion or nationality, were warmly welcomed and initially accommodated at the Haideri Imambara, Mombasa.

While most of the evacuees have since found an alternative settlement in other countries, a few decided to settle down in Kenya and Tanzania. The evacuation of the community in Somalia is yet another test of a magnitude not witnessed before in our community. We can however draw solace from the fact that in many ways, by the grace of Allah (SWT), our people have fared better than many. 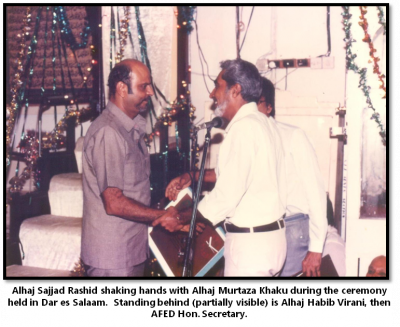