Being a man of principles, Mu’allim was against any form of corruption. During the Second World War, he followed a strict method of stockpiling and distributing food grains and implied that ‘regardless of the status or vocation of a person, if there is a pishi of rice for a local African then the rest of us would also receive the same.

In the still of the Ramadhan night amid these trying times I reminisce the serene Zanzibar evenings of more than 60 years back and my thoughts turn to Mu’allim Abdulrasul Bandali. In Zanzibar, Ramadhan had an aura of its own. Compared to the quiet atmosphere during day time, the evenings heading for the ‘iftaar time’ livened up. The old man, Hassanalibhai Juma (Mzee Juma) holding those bulging ‘mkate wa mofa’ (baked mill flour) would make his way towards the mosque and striding along there passed a tall figure in long overcoat and red turboosh hat of Mu’allim Bandali heralding the ‘maghrib adhan’ and ‘iftaar’. My Dad with a pinch of salt would immediately turn into his ‘namaz’ while the rest of us would be seated at the ‘iftaar table’ awaiting the ‘adhan’. The melodious proclamation of Mu’allim Bandali’s ‘Allahuakbar….’ on the loudspeaker from the opposite Junni mosque in Kiponda ascended the openness of the skies of Zanzibar and its gullies would re-echo his adhan. Personally, it was my first experience of melody at its best. Mu’allim Bandali’s strikingly simple and solemn chanting melody to this very day etches on my mind.

Of all the East African nations, Zanzibar was a different domain. Its language, people, culture, religiosity, food, habits, ethnicity and norms differed considerably from the rest of the East African nations. The Kutchis had dwelt on the tiny Zanzibar (Jangbar in their lingo) as early as eighteenth century and attributed their distinct status to the influence of Waswahilis, Omani Arabs, Yemeni Arabs, Comorians, (Wangazijas), Bahrainis, Persians and such other groups, which led to the formation of multiracial people among us. They underwent an era of the Omanis’ Sultanate and the British Protectorate rule and most of their accent was noticeable unlike the thick vernacular of those who moved to Zanzibar much later.

One of these rare Jamnagri persona was the Zanzibar born Khoja Mu’allim Bandali, who with his accented vowels had evolved himself into a sort of linguist. ‘SAUTI YA UNGUJA’ (Voice of Zanzibar) at Raha Leo was launched around 1951 and Mu’allim Bandali, was the only Indian along with Amirali Abdulrasul Alaya, who were selected for reciting the Qur’an in its melodious form. In fact, the elderly people in Zanzibar would remember that during Ramadan, ‘Sauti Ya Unguja’ program was relayed live from Bayt Al Ajaib (House of Wonders) with Mu’allim’s rendition featuring prominently. 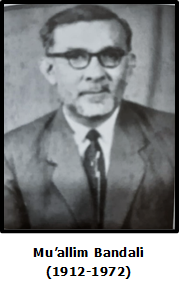 Following in the footsteps of his father Mu’allim, Murtazabhai also started reciting the Qur’an at a young age of 16. The Sauti Ya Unguja program presenter in his humorous tone would refer to the reciter as Master Murtaza Bandali. It is also worth mentioning here that among the Asians, Mu’allim Bandali and Murtazabhai were the only father & son duo to have recited Barzanji in Maulidi at Mnazi Mmoja in Zanzibar.

Mu’allim was a devout Muslim. I grew up listening to his recitations of Dua-e-Kumail, Dua-e-Nudbah, Dua-e-Iftitah, Ziyarat-e-Waritha, Ziyarat-e-Arbaeen among numerous other recitations of A’maal especially during the month of Ramadhan. Our typical memory of Zanzibar in those days was the brilliance of Mu’allim’s duas that made the community members attend the School Fez portion (over the top of the mosque) overwhelmed with emotions. On the Day of Ashura, Mu’allim would get up to call Shahzada Ali Akbar (as)’s last ‘adhan’ which would leave a moving effect on everyone who attended the Imambargha. Mu’allim also had a keen interest in reciting nauhas (eulogy). One of his particular nauha recitation that I remember was a Persian version of ‘Ay Kushtae Rahe Khuda binawaa Husayna….’ and the chants of ‘Zuljanah Akbal Minal Maidan Khali Waweila, Haye Wa Husayna .…’ when the scenes of Imam Husayn (as)’s martyrdom were enacted in the Imambargha.

Thinking about Mu’allim, what comes to mind is Mu’allim’s majestic figure that would occasionally emerge at the ‘Sheriff Dewji Darsakhana’ which would cause a moment of pin drop silence. Mu’allim Agha Sayyid Mehdi Shushtari, under whose guidance the ‘darsa’ was conducted, would then draw everyone’s attention by requesting Mu’allim “Tafazzal Maalim” which was then followed by recitation at its best.

Mu’allim Bandali was a compassionate and caring person. He never refused or turned his back to provide assistance. He would not only volunteer to provide ghusl to the mayyit, but also recite the kalima along the way, talqeen in the grave and then followed to condole the bereaved family. He demonstrated a fine example of how to follow the teachings of Maula Ali (a.s.) in today’s world. My father had very high regard for Mu’allim. He himself was a voracious reciter of the Qur’an and every morning after opening his shop, his first task would be to recite a ‘juz’ of the Quran. I could sense the mutual respect they had for each other.

Born in Zanzibar in 1912, Mu’allim Abdulrasul studied at the Government Central School in Zanzibar under then principal Mr. Hollingsworth. In 1931 he was awarded a Teaching Certificate and he started his career as a teacher in 1932 in Govt. School where he taught until 1937. He was then transferred to Pemba Island to teach in school where he was highly looked up to by his students. His stay there was suddenly called off as the British Government realized his expertise in mathematics and summoned him to Zanzibar to work in Debts Settlement Dept., Food Control Office and then the Economic Control Board from 1939 to 1944.

Being a man of principles, Mu’allim was against any form of corruption. During the Second World War, he followed a strict method of stockpiling and distributing food grains and implied that ‘regardless of the status or vocation of a person, if there is a pishi of rice for a local African then the rest of us would also receive the same.’

He also served in various capacities in the secretariat office in Bait Al Ajaib until he was promoted as the Office Superintendent and Estimates officer from 1953 to 1959. Mu’allim’s noble character became further evident during his tenure at the Secretariat’s office. He fought for the pension rights of the messengers. As an office Superintendent, he was well versed with the rules and based his arguments plausibly which led to the Financial Secretary eventually giving his approval for the Pension for the Messengers. Coincidentally, both Mu’allim as well as his son Murtazabhai had worked for the Passport and Immigration section in the British High Commission in Dar es Salaam. After the Zanzibar Revolution, they were subjected to bribery attempts but they vehemently declined the offer.

Mu’allim and the Zanzibar Sultan Sayed Khalifa shared a special bond. Murtazabhai also vividly recalls accompanying his father to the palace on the occasion of Eid Baraza. Mu’allim was usually entrusted to organize the baraza on Eid-ul-Fitr and Eid-ul-Adha. Murtaza, then a kid, was presented with the task of placing name stickers of the invited guests on their respective chairs. Years later when Mu’allim retired, the Chief Secretary PAP Robertson hosted a party in Mu’allim’s honour at Bayt Al Ajaib acclaiming Mu'allim as a proficient and an indefatigable person. In his typical British humour, Mr. Robertson summed up his speech saying thenceforth any shortcoming in such a function meant conspicuousness of Mu’allim’s absence.

Mu’allim went on to receive the Coronation Medal in 1953 awarded by the British Government in recognition of his services. He was also a recipient of the Order of Brilliant Star (Wisam al-Kawkab al-Durri) by the Sultan of Zanzibar Sayyid Sir Abdullah bin Khalifa bin Harub for his sterling services to the Government.

Mu’allim Abdulrasul Bandali got his Teaching Certificate in 1931. His illustrious career included: 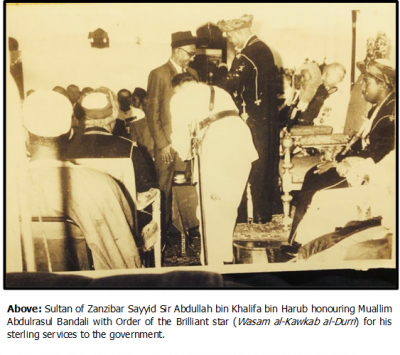 Mu’allim passed away on 27th November 1972 in Dar es Salaam. It is not surprising that his funeral was attended by a large number of people. When a Hindu person inquired about the reason for such a large attendance in the funeral he was replied, that had Mu’allim died in Zanzibar, a considerably larger number of people would have attended his funeral. Mu’allim was quite popular among the Waswahilis, Arabs and Wangazijas.

There is a popular phrase which says, ‘Like Father Like Son’. Today, Mu’allim’s sons Murtazabhai and Husainbhai, both in the UK, have a great following. Even though they are over 80 years & 70 years old respectively, their lilting recitation has an overwhelming effect on the listeners. Their tapes and CDs of duas, marsia and nauha that are rendered in the Zanzibar of 50s & 60s are most sought after. In fact, Murtazabhai’s recitation of Munajat of Imam Ali (a.s.) ‘Maula Ya Maula’ to this day remains unmatched and has become a prominent feature of the Ramadhan recitals. 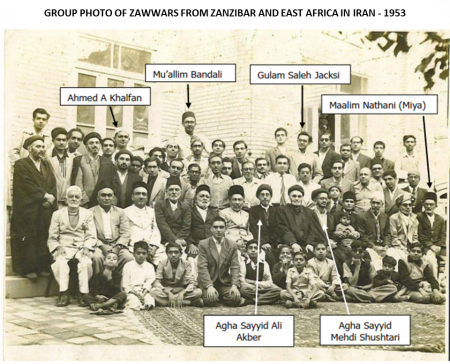 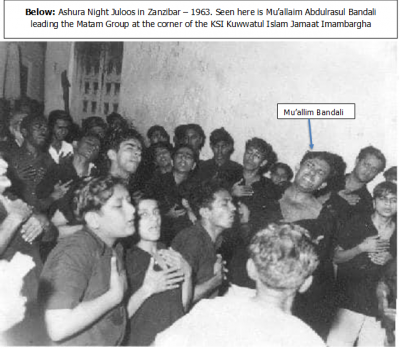