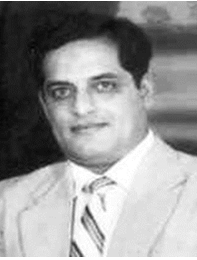 Perhaps the mainlanders will remember Mohamedhusain Hassanali Ahmed as an old timer reciting ‘Ya Husain na bewatan…’ at the kabrastan on the Ashura day or being brought to the mosque or mehfil in a wheel chair hardly realizing that in his hey days he was the very epitome of Zanzibar Khoja Ithnashries’ zealousness.

The Zanzibaris had penchant for calling people by way of nickname and that made Mohamedhussein “Mamsen Khokoni” as he resided in the Khokoni corner of Malindi. Since childhood he exuded great confidence and even adjudged Zanzibar’s best scout in the British colonial days that won him a gold medal. He along with Golo Saleh (the late Gulamhussein Saleh) formed the community’s most imposing personalities. Their names remain associated with Zanzibar’s spectacular Matam Njiani (julus), khushali bankro or Hussein Day since the days of 1930s.

He was one of the most ardent azadar. First Muharram onwards he would attire himself in black till the twelfth and always availed himself of his leave during the 12 days to devote it to azadari, even whilst with NBC in Dar-es-Salaam where he was a Security Officer in the Administrative Services Department and resided on the top floor of the famous City Drive Building.

One of Mohamedhussein’s most distinguished features was his extraordinarily powerful voice. His rendering of kalema during a funeral procession in Zanzibar generated tremendous emotions and the scene still etches on the memory. His recitation of ‘jab akhri rukhsatse Husain ae haramme…’and Ya Husain na bewatan….’ to this day remain unmatched. In saf matam his presence was striking up till the end of the matam which would culminate with salutations (ziyarat) of the Martyrs of Kerbala. The late Husain Sultan Nathani had the knack for emulating his mentor when the saf matam climaxed with the rendition of ‘çhalie Madina…’ or the final stanza ‘ruswaio ….’. Sadly, both remain no more.

How could we ever forget Mohamedhussein’s soulful ‘kehte hai Zainulaba leke alam ayah u, utho Rasule Khuda leke alam ayah u…’ resounding through the Kiponda vicinity in the return leg of the Chehlum julus en route from kabrastan to imambara as the sun would set in the Zanzibar of by-gone days and the emotions of the devotees raised at fever pitch. Ah for those days of Zanzibar! 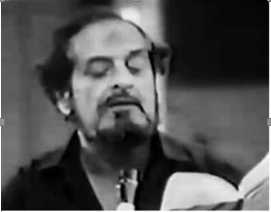 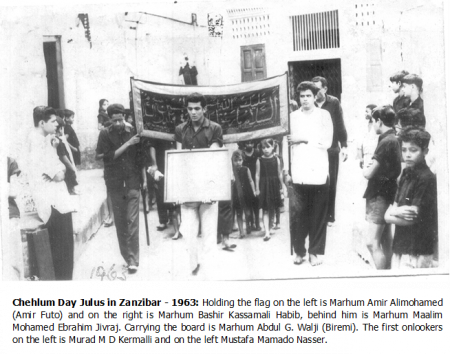 Photographs by courtesy of: