Abdulhussein Jusab Sachedina was born in 1911 at Mundra, Cutch in India and lived in Dar es Salaam and Lindi. He was the first secretary of Lindi Jamaat. Being a writer he had taken the pen-name of 'Azad' and so although his name was Abdulhussein he was popularly known by his pen-name. He was among the first persons who floated the idea for the creation of the Federation of all KSI Jamaats in Africa and so he is referred to as one of the "Pioneers" of Federation of Africa Jamaats. 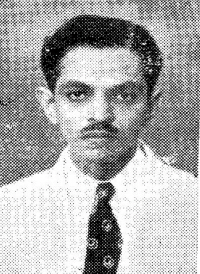 In his book on Khoja History, Marhum Mulla Asgherali writes the following regarding Marhum Azad Sachedina:

Among the first thinkers who wrote about the need of a common platform was Marhum Abdulhussein Sachedina "AZAD", editor of the Gujarati monthly, "MUNADEE". "MUNADEE" means 'a herald'. In 1932, this reticent but profound thinker wrote an editorial in his monthly, appealing to leaders of major Jamaats to awaken and rise to the changing times. He can be safely called the first visionary who saw the ailing society, and suggested a remedy with clarity. His powerful pen heralded a new era.

Marhum Azad had a style which was quite appealing. With almost complete command over his subject, he wrote poetically, gracefully and with enviable coherence. In this editorial which he penned in 1932, he says: "lthna-Asheri Society today is overwhelmed by layers of backwardness and retrogression. These layers have been building up for the last several years, and continue even today. The horizon is bleak and dark, and nowhere is a ray of light to be seen. The ship of our community is drifting aimlessly and helplessly in a vast ocean, and none can predict when it will perish against the rocks. This is not a figment of imagination by a poet, or empty, fictional verbiage by a writer. Those who care to spare a moment or two to make an appraisal will agree that our words portray an exact and accurate picture of the prevailing situation."

And then he proceeded to enumerate the ills of our society, condemning the time worn, sometimes outlandish, traditions and social norms which he believed must be shunned. He described how the community was scattered in the remote parts of East Africa, gradually becoming disorganized, losing contact with the mainstream of the Ithna-Asheri society. Mincing no words, he held the leaders of the major Jamaats responsible for the pathetic state of affairs, "Progress without reform and organization is difficult. We need a strong, fortified set of laws which should bring about order and discipline in all our Jamaats, big and small, and should open up the stifled path of progress and advancement. This has got to be our goal, and the easiest way to achieve this is to form a Central Council of the Shia Ithna-Asheri Community in East Africa", he wrote.

In response to this editorial, Marhum Abdulhusein Nurmohamed wrote a letter which was published in "MUNADEE" in January 1933. He supported the editorial, and gave a detailed programme for such a Central Council, should it ever be established. The letter shows that he clearly saw the use of such an organized, central body, and that he was gifted with a sense of direction to which, he thought, the community could be led. No wonder he was elected the first President of the Central Council when it was finally formed twelve years later (AFED was formed in 1946).

Abdulhusein Sachedina passed away at a young age of 46 in 1957 in Dar es Salaam where he remains buried. He was survived by his wife Hamida and children Zarina, Gulshan, Salim, Abdulmajid, Abdulaziz, Zainab (Jenny) and Raziya.