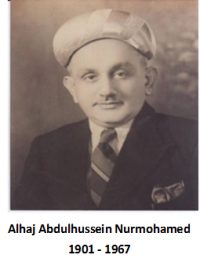 Nurmohamed Kalyan travelled to the Island of Zanzibar from India in 1880 at the age of 10. He had two brothers Esmail Kalyan and Sachedina Kalyan. The Kalyan family is one of the first families to settle in East Africa. After 10 years in Zanzibar, the family moved to Kenya. Murrabbi Abdulhussein was born in Zanzibar in 1901. He obtained his primary school education in Zanzibar and moved to Mombasa in 1913. After two years in Mombasa, he established the famous A H Nurmohamed & Co Ltd. which later had several branches in East Africa.

His first steps towards leadership started in 1922. In 1926 he entered public community service. He worked as an executive member in Indian National Congress and Indian Association for a period of 13 years before taking up the position of Hon Secretary in both institutions for two years. He then became the President of Indian Association, a post which he held upto 1948 serving the Indian community in Mombasa. He was a member of Mombasa Municipal Board from 1939 to 1955. He was Vice-President of the Board in 1950 - 1951. He was a member of the Kenya Board of Commerce & Industry for Copra and Coconut Oil production from 1945 to 1948. He was the President of the highest organ of the business community of East Africa called the Federation of Chambers of Commerce of Eastern Africa from 1948 to 1950.

After serving in the Municipal Council for 16 years, he retired due to ill-health. Murrabbi Abdulhussein was President of Pandya Memorial Society. He also served as executive committee member of Coast Subsidiary Hotel, Kenya Maize Marketing Board, East African Tourist Travel Association, and Board of Governors of Mombasa Muslim Institute. In 1958, he was appointed as member of the Kenya Legislative Council and in 1960, he was appointed in the Kenya Council of State. He also served on the Education Board of Mombasa Jamaat.

Murrabbi Abdulhussein had enormous record of service to the community. He was President of the Federation of Khoja Shia Ithna-Asheri Jamaats of Africa from 1946 to 1949 and from 1952 to 1958. His efforts to unite the community and bring about progress in the community are well known. Owing to his noble and great service, he was awarded an honorary membership of the Council. Some of the first steps taken during his first term were to carry out the census of the community, introduce Birth and Marriage Certificates issued by the Council, award education grants and scholarships for higher education, obtain scholars for Tabligh and grants for acquisition of higher religious education.

Source: AFED Trade Directory - 1960 and updates by Br. Mustafa Pirmohamed of Orlando, USA (who is originally of Lindi).