The Golden Era of Zanzibar

Every old timer Zanzibari, wherever he or she may be, yearns for those good old days of Zanzibar, we call it the golden era! We Khoja Ithnashries in particular tend to recall several memorable occasions of the past and one event that obviously comes to mind is Khushali Bankro. It had an attraction of its own. On the eve of khushali bankro there would be buzz of excitement all around. The long pavement outside the Imambara of Juni Masid in Kiponda was the famous Barzaa Imamwaro and alongside it the road that would be transformed into khushali bankro (spread over with wooden benches and folding wooden chairs) on the eventful khushali of Prophet Muhammad (SAWW) and Imams (AS). Khushali bankro was always held on the second night of the khushali. Its celebration dated back to the late 1930s pioneered by youths like Mamsen Khokoni (Mohamedhussein Ahmed), Golo Saleh (Gulamhussein Saleh Allarakhia), Akbar Jessa (sukari mawe), Mohamed G. Walji (Biremi), Abdulhussein Mohamedali Meghji (Magamba) and others who made the preparations starting from the afternoon placing wooden benches & folding wooden chairs, erecting stage and fixing coloured electric bulbs which brightly lit the place. The veteran elder Abdulla Bhimji functioned as electrician, others were; Abbas Kassamali Versi (Mulla Pinji), Abdul (Ndulu - young brother of Mohamedyusuf Bandali), Mahmood Mzee Haji Ali Chandoo, Yusuf Mohamedali Kermalli (Shufu) and Fidahussein (Mithu Khati Mongi).

There were as many as 50 rows of wooden benches and chairs stretching from the ladies imambara entrance or Mohamedhusain Virjee’s (Mamdhu Bi) barafu stall to the old School Fez or Taki (Kara) Daactar’s dispensing shop/home off Kiponda Road. Bankro is the Gujarati word for the mobile thick wooden bench long enough for five to six adult seating. The children and youths rushed to occupy their places. There were children galore like a milad and they came in with their fathers or followed their elder brothers. They put on their best clothes. Some dressed in Arab attire; others donned police inspector uniform or sailor uniform. The atmosphere was very lively indeed. The euphoric function started at about 9 pm and lasted an hour or so. It commenced with the recitation of Qur’an by Mu’allim Abdulrasul Bandali or Murtaza Abdulrasul Bandali followed by qasida by youths from school Fez (prominent among them were Murtaza Bandali, Kassamali Chandoo, Ashiq Kermali, Jaffer Mulla Hashnu and Husain Bandali). Then there was a brief lecture by one of the scholars, Mulla Hussein Allarakhia Rahim was a familiar speaker and finally munajat.

The elderly people and Jamaat leaders were seated in front of the stage on comfortable chairs (as seen in the photograph below). The recitation resounded on microphones amid the cheering noise created by the children throughout the function. They eagerly awaited the gift which was presented to them towards the end (a box of Maxfactor powder, hair pin, pencil and eraser, purse, wallet, comb, handkerchief etc.) along with the distribution of sweets or confectionary and ice cream.

In the earlier days khushali bankro was also held in the Hurumzi gully where Rashid Manek, Khamis Damji and Khaku Rajpar families resided. They were the organizers of the Hurumzi khushali bankro along with other Hurumzi families like Saleh Allarakhia, Bandali Hasham (Bhandha), Remu Thakro (Bapa Nana who also provided service to the Junni Imambara kitchen along with Gulla Dawood), Abdulla Hameer, Kassam Manji (Sukari Mawe), Jaffer Hirji (Jafu Msumari), Yusuf Mussa Virjee and others.

Ah for those days of khushali bankro in Zanzibar! 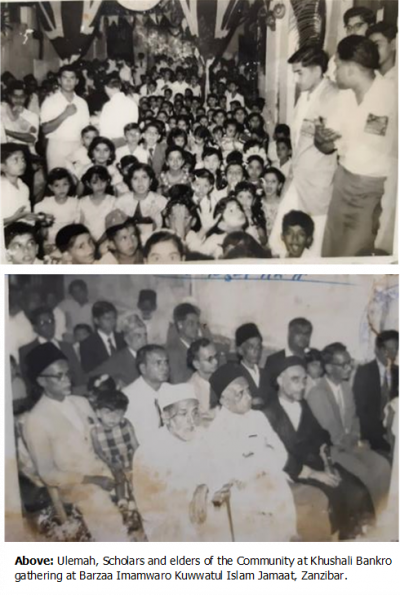 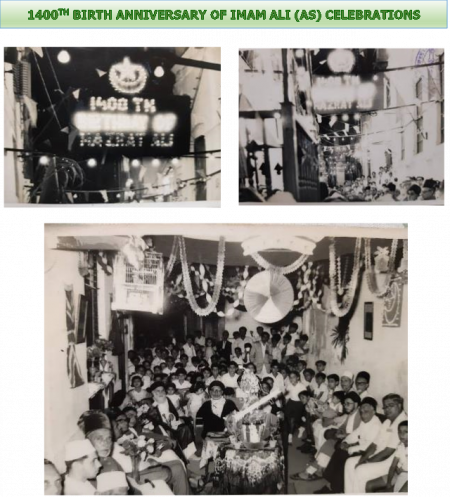