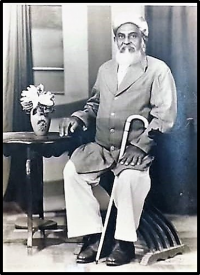 Popat bhai Rawji arrived in Dar es Salaam in 1904 from India after a long sea voyage. He explained briefly on the development of our community in Dar es Salaam, as follows:

The two main people who contributed in the construction of Dar mosque were Sachoo Peera and Nasser Mawji. Nasser Virji had funds from the Hemani Trust which was used for construction of the Musafarkhana in 1913. The opening of Dar mosque was done by Agha Kuchak Shah who arrived from Zanzibar with other dignitaries for the opening ceremony in 1942. The old Imambara was constructed mainly by efforts of Versi Advani. From 1907 to 1918, children were taught Quran recitation by Musa Ali Hussein of Maswa.

Electricity was introduced in Dar in 1916 and running water introduced in 1918. Upon advent of tap water, water wells fell out of use. Motor vehicles were introduced in 1918. The local natives were vey peaceful and faithful people. Trade caravans went to Bagamoyo, Ujiji and Tabora mainly on foot. The new Imambara in Dar was built following efforts by Br Gulamhussein Virji who called upon the community for financial contributions. The first donors were Versi Advani, Rajabali Alidina, Alibhai Ebrahim, Daya Walji and Suleman Daya. The donors also helped collect contributions from the wider community. This resulted in the new Imambara which was built in 1942.

Daya Walji donated the Madressa building and Alibhai Ebrahim donated Bewakhana (for widows) in the memory of his deceased wife. Br Juma Haji built a dispensary in the memory of his deceased brother, Br Ebrahim Haji (still operating under Dar es Salaam Jamaat by the name of Ebrahim Haji Charitable Health Centre). Mehfil e Abbas was constructed through the efforts of Fatmabai Haji Mohamed Sheriff and cooperation from Br. Haji Jiwan and Br Gulamhussein Virji and through collection of donations from ladies.