In the evolution of Khoja Shia Ithna-Asheri Muslim Community,acquisition of grave yard or cemetery as a burial place has been of prime importance. Wherever they settled, members of of the Khoja community have paid special attention to the acquisition of burial place before building a Mosque or Imambara. There is historical background to this outlook. When the Ithna Asheri Khoja separated from the larger Khoja community in order to openly practice their faith as Khoja Ithna Asheri, they were denied right of burial in the ancestral Khoja cemetery. Until then, all Khoja functioned as united Khoja community with their tripartite set of beliefs overlapping with each other. Regardless, of their leanings towards the Ismaili,Sunni or Ithna-Asheri sects, they would all be buried in the common Khoja cemetery.

In 1862, when the first group branched out to be known as Sunni Khoja and the second group followed suit, a decade later, to be known as Shia Ithna-Asheri Khoja, the separating groups were barred from being buried in the ancestral common cemetery. In 1873, when a group of Ithna-Asheri Zuwwar visiting Karbala was persuading Mulla Qadir Husein to to return with them to India to help provide spiritual guidance to the Community. Mulla Qadir Husein expressed his reservations on two counts.

Khalfan Rattansi and Dewji Jamal pledged that if the larger Khoja community refused them burial in the ancestral Khoja cemetery , they undertook to transport corpses of such )individuals to Karbala for permanent burial. Khalfan Rattansi pledged Rs 10,000/- (a large sum in those days) for this purpose. In the meanwhile, Dewji Jamal also acquired a piece of land in Karbala as a burial ground. There was concern that until such time when the corpses are transported to Karbala, where could they be intemed even on a temporary basis. Mulla Qadir Husein obtained permission to this effect from the Trustees of the Irani cemetery. Lalan Alidina was assassinated in Karachi in 1876. His remains were later transferred to Karbala for permanent burial. In the same year, in Mumbai, Shahid Killu Khataw had to be buried in the Iranian Cemetery.

Before the Zanzibar Jamat was established and the emerging Jamaat could acquire graveyard of its own, a child died in the family of Dewji Jamal in 1880. Dewji Jamal recognized that as it happened earlier in Mumbai in 1876, when the daughter of Khalfan Rattansi and Killu Khataw were denied right to of burial in he common Khoja cemetery, same faith would befall on him in Zanzibar. Following the death of the child in the family,overnight Dewji Jamal bought a private garden/rest house located in the centre of the Zanzibar Island. In keeping with the Local Arab tradition, this private garden, known as 'Bustani' was then registered as a family burial place. This small burial place in Zanzibar has withstood the subsequent acquisition of the larger muslim graveyards in Zanzibar for housing development projects.

With this background in mind, it will be easy to understand why members of the Khoja community have always given so much importance to the acquisition of a burial place. The first Khoja Jamaat to be established in Africa was in Zanzibar in 1880, followed by Bagamayo in 1889. In Kenya, Lamu, then a major Port in Kenya, had a larger settlement of community members numbering around 250. The community population in Mombasa towards the turn of the century was almost half that of Lamu. Mombasa acquired importance and the focus of trade and commerce shifted from Lamu to Mombasa after the commencement of the railway line from Mombasa to Nairobi,Kisumu in 1901 and the opening of the Kilindini harbour. As Mombasa Jamaat was growing, towards the end of the nineteenth century, the following plots of land were acquired on Mombasa Island that now form part of spacious Mombasa cemetery.

Decedents of Dewji Jamal,Sheriff Dewji and Jaffer Dewji made waqf a piece of land in 1897 on which the present Qabrastan stands. Jivraj Khataw,Dharamsi Khataw and Jivraj Meghji donated three pieces of land adjoining the above Qabrastan in 1901,1902 and 1904. All four pieces of land combined now constitute the current spacious Qabrastan in Mombasa. 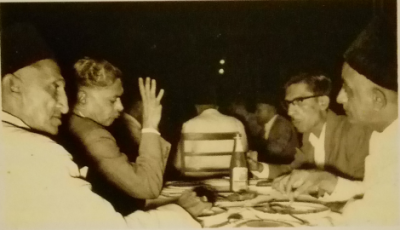 In 1990 the Mombasa Jamaat embarked upon an exercise of numbering the graves and demarcated the Qabrastan in sections for easy reference and produced the first Directory of Marhumeen. We have endeavored to update our records and a new website www.msamarhumeen.com was setup to database the names of all marhumeen of the Khoja Shia Ithna-Asheri Jamaat of Mombasa. While we have strived to produce the website to the best of our abilities, and at times dealing with undocumented information, we realize errors are bound to occur. We sincerely apologize in advance for any inaccuracies,errors or omissions that you might come across. We should be grateful to be kept informed of them so that we can keep our database up-to-date. We are therefore seeking the co-operation of the members of the Mombasa Jamaat and those who now reside overseas to please review the data of their marhumeen and kindly give their input so that we have the correct information on our website. Please email [email protected]

Demolition of the "Berlin Wall" dividing the two cemeteries in Mombasa. Seen in the picture holding the crowbar is Haji Mohamed Sadak, Jivraj Meghji (right). Another person holding the crowbar (left)is Haji Abdulhusein Dharamshi Khatau. Both being heirs of the original donors of the Qabrastan and Trustees of the Mombasa Jamaat. 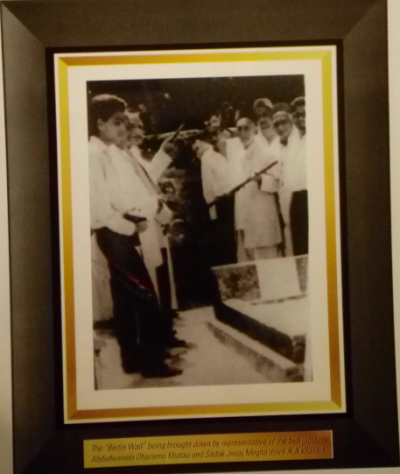 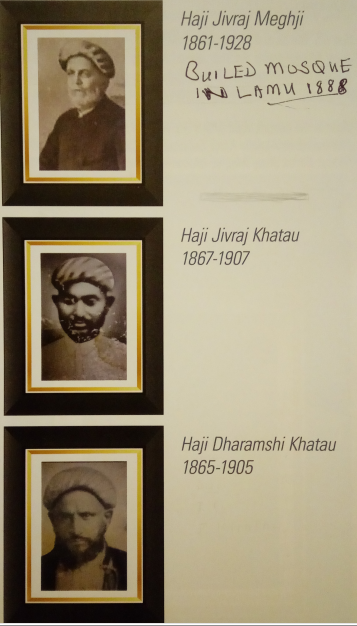 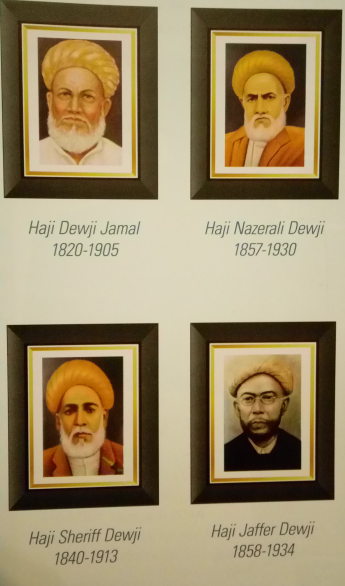 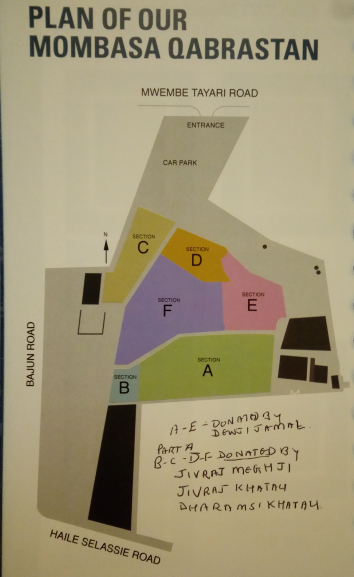