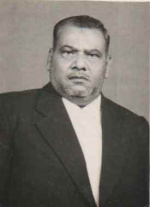 Haji Mohamedbhai Manji Walli was born in 1910 in Kutch, Mundra in India. Mohamedbhai came to East Africa in 1928. He first landed in Tanga and worked for Suleiman Khimji. In 1933 he migrated to Dodoma. In Dodoma he worked for Remtulla Pirbhai. While in Dodoma, he served Dodoma Jamaat as its Chairman, Secretary, Treasurer and Mukhi. He also looked after the Supreme Council properties in Dodoma and Kondoa.

In order to enliven and continue the mission of Imam Hussein (AS) in the town of Dodoma, Mohamedbhai initiated the construction of Dodoma Imambargha. He sacrificed his time to supervise the project and worked heartily in collaboration with Haji Gulamabbas Pirbhai of Arusha and Haji Abdulrasul bhai Molu Chatoo of Dar es Salaam to collect funds from Dar es Salaam, Arusha, Moshi, Singida, Bukoba and Kigoma. The Imambargha opening ceremony was held on Saturday 10th June 1961. The opening ceremony was performed by the Haji Muhamadbhai Abdallah Khimji of Dar es Salaam. Besides the members of Dodoma Jamaat and Government officials, the dignitaries from Dar es Salaam Murabbi Haji Abdulrasulbhai Molu Chatoo and the President of Dar es Salaam Jamaat Haji Muhamadbhai Nasser were also present during the opening ceremony. 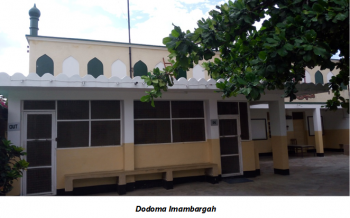 Mohamedbhai moved to Arusha in 1963. He continued working for Remtulla Pirbhai until 1965 and started his own business in 1966. In Arusha, he served as the Jamaat Chairman from 1965 to 1966. He also served the Jamaat in various capacities as Mukhi, Committee Member and Master of Religious Ceremonies. Mohamedbhai held the position of the Minister of Religion from 1964 to 1977. Mohamedbhai was Zakire Hussein and served as a Zakir both in Dodoma and Arusha in the absence of an Aalim in these Jamaats. Mohamedbhai was bedridden for 7 years before passing away on 31st May 1983 in Arusha. He was survived by four daughters and three sons.

Source: Some of the information was extracted from Federation Samachar of August 1961 and some was provided by Marhum Mohamedbhai’s grandson, Br. Sajjad Manji of Dar es Salaam.