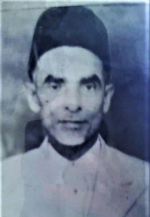 Marhum Gulamhussein Kalyan was born in 1903 in Kutch Mundra. He learned the Quran and Dinyat from Mulla Haji Mohammed Khaki in Kutch. Then he went to Bombay to study at Khanmohamed Habib School. He stayed at Sir Karim Ebrahim Baronet Orphanage. In 1922 he travelled to Zanzibar with Bande Khoryo and worked at Ladha Meghji. In 1924 he accompanied Marhum Rashid Versi to Lindi where he worked at Marhum Razahussein Pardhan business.

When he came to Lindi, Marhum Haji Hamzaali Noormohamed was the President of Lindi Jamaat and Abdulhussein Sachedina was the Hon. Secretary. The membership fee at that time was Sh. 1.00. A story which he relates to Marhum Jaffer Najak says that during the First World War, the British navy came to Lindi and there was a lot of looting. All Indians were sent to Chibubu. Among those sent were a rich merchant, Fateh Fazal Chandoo and his father in law Rashid Mohamed Chandoo.

The Lindi mosque was built in 1901 and the Cemetery was also built at the same time. One of the first persons buried in Lindi Kabrastan was Karim Moledina (uncle of Morokhaw - Mohamed Ladha). Some of the early teachers of Dinyat at Lindi include Mulla Gulamali Ladha, Mulla Abdulhussein Remtulla, Mulla Abdulhussein Mulji and Mulla Jafferali Nazarali. In 1940s Lindi used to have seaplanes coming. The Lindi airport was constructed around 1943 during the second world war.

Marhum Gulamhussein Kalyan was a very pious person and a staunch attendee at Namaze Jamaat. Even in his old age, he could be seen walking from his home far away from mosque not missing any Jamaat namaz. He was a Zakir and used to recite majlis at homes and Imambargha. Marhum had three sons Mohamedraza who was also a Zakir and passed away in Lindi, Akber who lived and passed away in Karachi and Hussein who currently lives in Lindi.

Source: The above story was narrated by Br. Hussein Kalyan in May 2008.