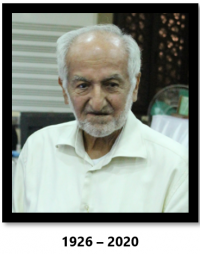 The Africa Federation Secretariat received with deep sorrow and sadness the news of the demise of our Trustee Alhaj Ebrahim Allarakhia Kassam of Kampala, Uganda which occurred in Nairobi, Kenya on Thursday 31st December 2020.

Ebrahim bhai Kassam moved to Canada following the expulsion of the Asian Community from Kampala in early August 1972, the President of Uganda, Dictator Idi Amin, ordered the expulsion of his country's Asian minority, giving them 90 days to leave the country. In his interview with Khoja TV during the last AFED Conference held in Mombasa in 2019 Ebrahim bhai spoke on how his life was after the expulsion from Uganda, when he and his family had to stay at a camp in Vienna, Austria before getting the opportunity to move to Canada. On arrival in Canada, he was employed at a farm to take care of cattle and milk cows, a total change from his life in Kampala where he owned a large number of farms and employed various people to carry out the work. The family then moved to Toronto where he joined the Jamaat as a Committee member and later served as the President of the Jamaat. During his tenure with the support of the Gokal Family they were able to establish the first Mosque and Imambargha in Toronto.

His former services to the Community in Kampala were immense where he started serving at the age of 10 as a volunteer, later served as the Mukhi of the Jamaat before becoming the President of the Jamaat before the exodus. He was involved in the building of flats for the middle-class families in Kampala. On his return from Canada to Kampala he continued to play his part within the Community. In 1998 he was elected as a Trustee of the Africa Federation; a position he held until the time of his death.

He was bestowed the Abbasi Medal by the then Africa Federation Chairman Alhaj Ramzan Nanji in 2007 for his vast contributions and selfless services to the Community. His mother Kulsum bai Kassam is amongst the first recipients of the Africa Federation Fatemi Medal in appreciation of her services and contributions towards our community. At the 75th Supreme Council Session held in Dar es Salaam in May 2014, Marhum was presented with the Chairman’s Award by Alhaj Anwarali Dharamsi for his farsightedness, dedication and selfless services to the community in Uganda and to the Africa Federation. His advance age did not deter him from devotion and services to the Community. 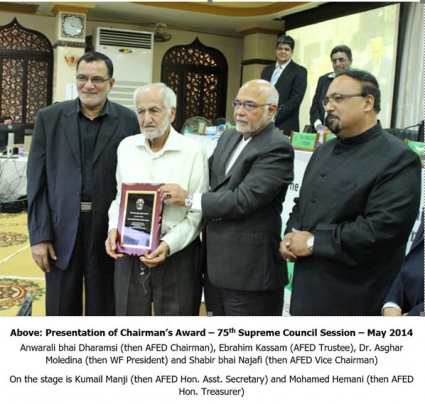 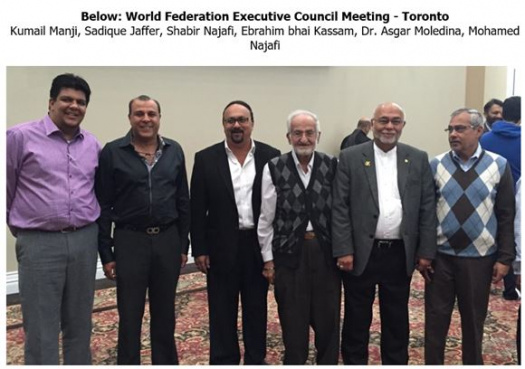 Condolence Message from the Chairman of Africa Federation – Shabbir Najafi

“The office bearers of Africa Federation received the news of the death of Murrabbi Ebrahim bhai Allarakhia Kassam with great sadness. He dedicated most of his life in services to the Community and served as the Trustee of Africa Federation since 1998 up to the time of his death. He was a regular attendee of the Africa Federation Supreme Council Sessions and Conferences and attended the last Conference in April 2019 in Mombasa, Kenya. He will be remembered by many for his humble nature, foresight and wisdom.

On behalf of my colleagues and myself we convey our heartfelt condolences to Marhum’s children and all the family members on this irreplaceable loss”.

At the Majlis organized by Kampala Jamaat for Marhum Ebrahim bhai on Tuesday 5th January 2021, the Africa Federation Chairman Shabir bhai Najafi paid a tribute and spoke on Marhum’s deep attachment to the Community; which he considered as his family. He spoke on the discipline that Marhum possessed which he said is a legacy that the Community needs to follow. He also spoke on the support Marhum got from his wife Marhuma Rukiya bai who was his strength and confidante. Shabir bhai conveyed Africa Federation’s heartfelt condolence to the family through his son Murtaza bhai and concluded that Marhum will be missed dearly. Marhum is survived by his four sons, three daughters, 18 grandchildren and 9 great grandchildren.