A Rare Personality in the Service of the Community 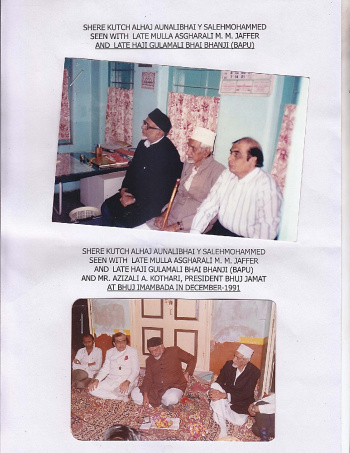 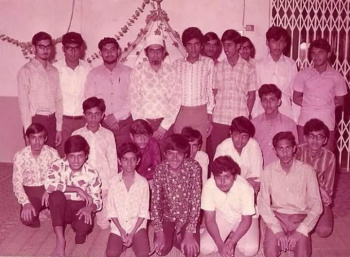 The following article was written by Alhaj Dr Hasnain Walji, former President of The World Federation. This tribute to Late Mulla Asgharali M M Jaffer and Late Haji Gulamalibhai Bhanji (Bapu), and reflection of Aunalibhai Saleh Mohamned was translated into Gujarati and his message was included in the monthly publications of Ahmedabad Allahumalabbak and the Bhavnagar Bage Firdos.

The KSI community that had been separated by the vastness of the Indian Ocean, for almost a century, one institution and three men were primarily responsible for the rediscovery of the Khojas by each other. The two other men have passed away and he alone lives to tell the tale. Who is this rare personality in the service of the Community?

I feel blessed to put pen to paper, a few words about a colleague - though he is also an elder, about a friend -though he is also a mentor and above all a fellow humanitarian -though his contributions to humanity are much greater.

This person, born in Zanzibar, showed an early promise of community service, serving as a young volunteer at the Hujjatul Islam Jamaat moving on to being an officer of the Ithnaasheri Gymkhana, and a troop leader in the Zanzibar Boy Scouts. Moving to Dar-es-slaam, as a young man, he broadened the scope of his active services in the field of Islamic Education through the Husseini Society and Madressa in various leadership positions for almost a decade. His life path included a brief but formative time in the life of the Dubai Jamaat where he became one of the earliest Committee Members of the Jamaat that had just been formed.

This man is a rare personality in the KSI Community who decided to go back to his roots – from East Africa to settle in India and serve the Community in Kutch and Kathiawar. It almost seems that this path was decided by some unknown powers. His move to India, as our history was unfolding, became a critical factor in our development. The KSI Community that had been separated by the vastness of the Indian Ocean, for almost a century, began to find each other. To that end, one institution and three men were primarily responsible for this rediscovery of the Khoja by each other. The two other men have passed away and he alone lives, not only to tell the tale but is passionately pursuing to preserve the legacy of those great sacrifices by these towering personalities, who were instrumental in rejoining the Khojas in Africa with the Khojas in the Sub Continent.

The sea of service which the three men plunged into was full of unknowns and through his persistence and efforts, much work was done to fight poverty, ignorance and disease. Over 20 years have gone by since his clarion call to address the issue of poverty in Gujarat at the London Conference which became a game-changer. Today the results of this heart-rendering appeal, followed by his personal efforts, endure through the hundreds of houses for the poor, scores of schools and thousands of children being educated, not just in Kutch and Kathiawad, but also in Bihar, Karnataka Andhra Pradesh and Maharashtra. Sadly these projects that he helped bring to fruition are sometimes obscured by the shortsighted perceptions of those who joined the service bandwagon much later. They who have little idea how far we have come as a Community since those days. The young in the Community, who are, (or will be) at the helm of the Community institutions, will do well to take some time to talk to him first hand to better serve the Community.

For over 30 years, I truly feel blessed to have known this man, observed his zeal to look after the poor and needy in India, and have travelled with him and know that he has a fund of experience and intricate personal knowledge of our past projects in India which could prove useful for our future work India. Those of us who have worked closely with him know him for his untiring passion for the welfare of the Khoja Community and above all for the genuine concern over the well being of the poor and the needy. However, very few of us know at what personal financial and emotional cost he has borne, as he silently championed many a cause for the poor, often at the additional expense of his personal friendships, relationships and goodwill.

Yes! The two great men were Late Mulla Asgharali M M Jaffer and Late Haji Gulamalibhai Bhanji (Bapu) and of course the organization is The World Federation. The outstanding human being that I have penned this reflection for, is none other than ‘Shere Kutch’, Aunalibhai Saleh Mohamned, holder of many accolades from many institutions including the recipient of the Late Mulla Asghar Ali M. M. Jaffer Memorial Award by the World Federation during the 25the Anniversary celebrations.

As they say in Gujarati "ગણા છે ઉપકાર, ગણા છે ઉપકાર, આભાર બાકી છે" . But as mere mortals, we can only say "thank you" and continue to be appreciative of the past workers of The World Federation which has made The World Federation what it is today. It is only for Almighty Allah (SWT) to bless Aunalibhai with ample rewards for the selfless services in facilitating the WF to serve the poor, the homeless, widows and orphans. I pray for his good health and long life so that he continues to benefit us with his experience as well inspire us with his passion for public service.

1976 Started working in Kutch and Surat in various welfare projects 1980 Activities in Gujarat 1987 Assisting in the establishment of the Husaini Education in Bhavnagar 1987 Joined World Federation to assist in ZCSS 1989 Working in Karnataka and Bihar for poor and needy in those regions.

(2 In Dar es Salaam: Secretary and President of Huseini society from 1966 to 1974 Captain of volunteers of Jamat for eight years Secretary of ladies section of Ithna Asheri Union for two terms Secretary for nursery school.

Kindly note that the following titles were given to Alhaj Aunalibhai Saleh mohammad by some of our Jamats and some by Shia Ithna Ashari jamats & trusts.

(2) ' 'SHER-E-KUTCH' given by then Vice President of World Federation Alhaj Manzoorbhai Kanani on 19-12-1993 on the occasion of opening of Tauhid Hostel at Bhuj Kutch.

(4) 'NAZIM-E-MILLAT' given on 17-11-1996 by the Muhammadi Religious and Charitable Trust - Ahmedabad Juhapura KSI Jamat on the opening of Mehfil e Zehra.

(6) 'BABA-E-QAUM' (Leader of the Community) given on 4-12-2006 by the Ahlulbait Educational and Technical Society Baragaon Ghousi dist - Mau (UP) on the occasion of opening of the Zainabiya School (Baragaon Ghosi).

(7) 'FAKHR-E-MILLAT' given on 5-10-2008 by the Jafferi Youth Federation Meta and Mulla Asghar Jaafri English School (Meta).

(3) Letter of Felicitation with Mementoes given by the Khoja Shia Ithnashery Jamats of Bhuj, Kera, Mundra, Nagalpur, Mandvi and Bharapar at a function arranged by all Kutch Jamats at Bhuj Imambada on 29-4-1986

(8) Mementoes given by the Imamia Education and Welfare Trust Bangalore by the hands of Mulla Asgharali M. M. Jaffer Saheb at Bangalore on 23 -11 -1996

(9) Certificate of Appreciation for Zaynabia Child Sponsorship Scheme given by the President of the World Federation of KSIMC U.K in March 1997

(10) Citation and Mementoes given by the Secretariat of the World Federation of KSIMC U. K in The World Federation Conference held in London On 17-10-1997 Presented by the President Of The W.F. Alhaj Mulla Asgharali M.M Jaffer Saheb

(12) Citation of Honour with Mementoes was given by The Council of Gujarat Khoja Shia Ithna Ashery Jamats on 23-1-2000 At Talaja by the hands of Ruhul Millat Mulla Asgharali M.M. Jaffer Saheb

(14) Late Mulla Asgharali M.M. Jaffer Memorial Award presented by the World Federation of KSIMC during the 25th Anniversary celebration in September 2002 by then President of World Federation Alhaj Hasnainbhai Walji

(15) Letter of Appreciation received from Dr. Sibtainbhai A. Panjawani then Hon. Secretary of the World Federation in September 2003

(22) Alhaj Hasnainbhai Walji as Ex. President of WF has praised all services given in India by Aunalibhai as Executive Concillor of WF in India in his speech on role of the Ex. Councillor of WF in October 2006 in Dubai WF Meeting

(25) Letter of Felicitation with Memento was given by Alhaj Anverbhai J. Dhanji on 2-1-2008 on the inauguration of Husaini Halland Imambada at Vijpadi Town Gujarat by Alhaj Anwerbhai Dhanji

(29) The Present President of WF Alhaj Dr. Asgharali Bhai Moledina has praised my services and He Address me as Sher-e-Gujarat in public function held at Bhavnagar Mosque On 10-11-2011

(31) Marhum Mulla Asgharali M.M. Jaffer and Alhaj Hasnainbhai Walji have send Letters and Emails of Appreciation and Thanks when they were President of World Federation 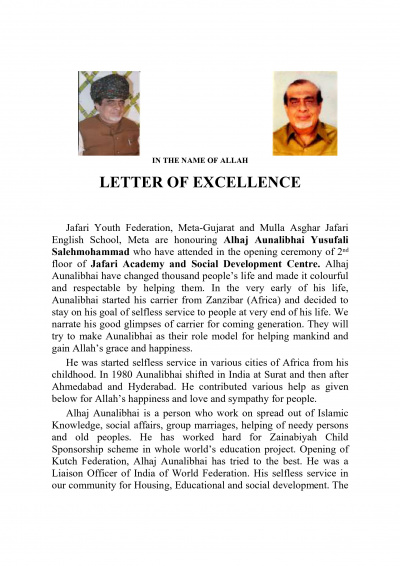 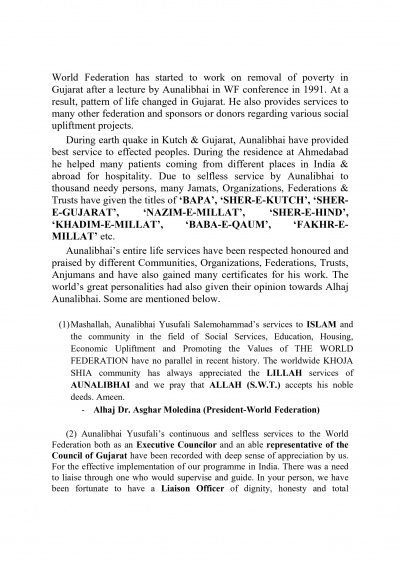 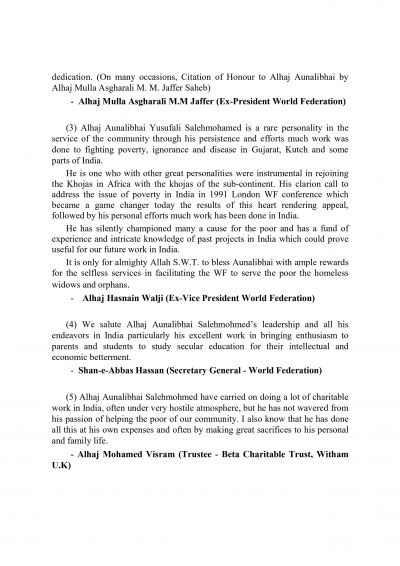 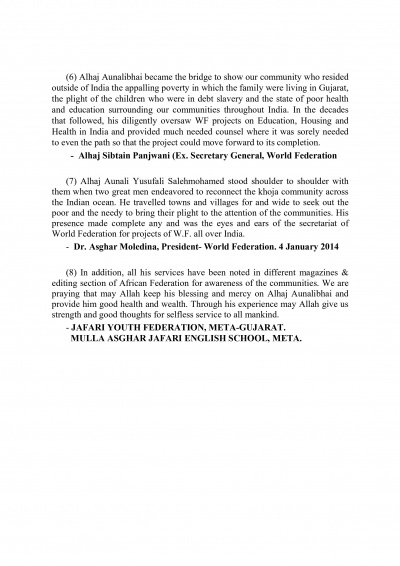