Condolence by The Africa Federation Secretariat 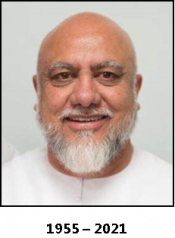 Born in Moshi on 6th November 1955, Syed was the eldest child of late Maulana Syed Ansar Hussein Naqvi who came from Lucknow, India. He was one of the first Missionaries under Africa Federation to serve our community in Africa, whose first posting was in Moshi Jamaat in 1953, and thereafter in Dodoma Jamaat, both towns are in Tanzania.

Syed Hassan started community services at a young age in Dodoma, Tanzania where he was the Chairman of the Jamaat in the year 1984 to 1992, before migrating to the U.K. where he served as the Hon Secretary of Birmingham KSIMC Jamaat for the years 1999 – 2003. He was one of the five candidates for the World Federation Presidential Elections in 2009. He was elected as the Electoral Commissioner – World Federation for the term 2011 – 2014.

Syed Hassan joined Africa Federation as Chairman of Tabligh Board (AFTAB) in 2010 under the leadership of Alhaj Anwarali Dharamsi and he continued for two terms till 2016. Syed was reappointed in the same position by the current Chairman, Alhaj Shabir Najafi from 2016; till he submitted to the will of Allah (SWT). He was also appointed recently to lead the Dar es Salaam Jamaat Tabligh Board by the current Jamaat Managing Committee. Marhum’s focus in the past few years were towards promoting effective net-working with institutions of higher learning in the field of the religion of Islam and the Madh’ab of Ahlulbayt (A.S.) – Likewise, he was keenly involved in reformation of our Madrassahs in the Jamaats of Africa Federation to bring about harmonization and vibrancy in the entire Madressah system by also introducing the World Federation Madressah Centre of Excellence (MCE) program aiming to bring up the standards of teaching and better understanding of the religion of Islam, the Holy Qur’an and the Madh’ab of Ahlulbayt (A.S.) by the Madressah students. Syed Hassan left no stone unturned in ensuring implementation of these programs, spanning several Jamaats in Mainland Africa including in Reunion and Mauritius Islands.

Syed played a crucial role in the field of Tabligh in our Jamaats in Africa, especially in promoting and inculcating Islamic and Family Values in the families by organizing several workshops, seminars and training conducted by professionals involving youths and parents. He was deeply concerned with the social vices which is penetrating in our community; as he painfully explained in the last three AFED Supreme Council Sessions. Recently Tabligh Board has been involved in assisting with Match-Making by holding closed session programs for parents and working with other similar bodies and individuals towards matching couples from around the globe. The Annual Qur’an Competition a flagship of AFTAB is an event that was very close to Syed’s heart and he together with his dedicated team have worked in making this event into popularly awaited occasion each year for the Madressah students in the Jamaats in Africa. The competition has grown in leaps and bounds over the years with more participation and categories introduced, amongst which the Maarifa having become the highlight of the event. Marhum was also actively involved in the Moon Sighting duties, including close coordination with various Jamaats, Ulemas and Institutions in Najaf and in Qum. Syed Hassan Naqvi’s contributions towards Tabligh in Africa has been outstanding – He was a person of action more than words. His passing away is not only a loss to the family but to the entire community and Africa Federation.

Condolence Message from the Chairman of Africa Federation

I am at loss of words to express my personal feelings and that of my colleagues in Africa Federation on the sad demise of our beloved Alhaj Syed Hassan Abbas Naqvi which occurred on Friday, 12th February 2021 in Dar es Salaam, his death was received with profound shock in many parts of the world as seen from the huge number of messages and telephone calls we received following the news of his death. Marhum possessed an amiable personality, whose presence at any gathering would brighten the mood of the place, his passion and dedication for the betterment of our community was always at the forefront in his thoughts and actions as witnessed during the meetings and discussions we had.

He was that one person who my team and I could call upon at any time to discuss complex issues that we were faced with and he would always be there to guide and support us. His sad departure from this world is heart-breaking and leaves behind a huge vacuum in the community, and most particularly in the Tabligh Board of Africa Federation (AFTAB) which he served so passionately as Chairman for over 10 years. AFTAB has lost a passionate, talented, devoted and kind hearted person whose efforts and immense contributions towards Africa Federation and the mission of Tabligh will remain for ever in the history of our Institution for a man whose mere presence in the Board was an inspiration and helpful for members of his team and others – He was the pillar of AFTAB. 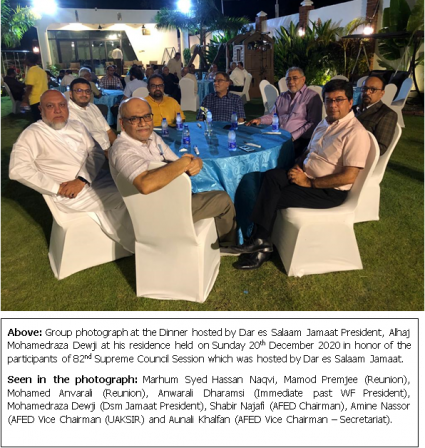 Marhum was the elder brother of Syed Mohamed Naqvi and Syed Ali Redha Naqvi. He is survived by his wife, Rehana bai, daughters Zahra, Ishrat, sons Maitham & Zain ul Abideen. With deep sorrow we convey our heartfelt condolences to his wife, children, brothers, sisters, grandchildren and all family members. We extend from AFED Secretariat our heartfelt condolences to the AFTAB members and to all Heads of the Madrassahs in Africa, and all those who were closely associated with Marhum Syed Hassan Naqvi. We pray to Allah (SWT) to grant Marhum maghferat and place his soul amongst the blessed ones in the vicinity of Chaharada Masumeen (A.S.) and who continuously receive mercy and grace of Allah (SWT).

A Tribute to My Dear Friend, Syed Hassan Abbas Ansar Hussein Naqvi On the 40th day of his Death

Syed Hassan and I knew each other since from the time I was the Chairman of Africa Federation Central Health Board (CHB) in 1980s when he was residing in Dodoma. Our relationship continued to grow over the years as we worked together in many areas. Our friendship grew closer after the World Federation elections of 2009. In April 2010 serving as the Honorary Secretary of Africa Federation under the Chairmanship of Alhaj Anwarali Dharamsi, I approached Syed Hassan to join our team and to take up the post of the Chairman of Tabligh Board of Africa Federation - AFTAB. He continued holding the position thereafter under the Chairmanship of Alhaj Shabir Najafi from April 2016 until his sad departure from this transient world on Friday 12th February 2021 (29th Jamadi-ul-Aakhar 1442 A.H.) – having served Africa Federation continuously for more than 10 years in this important capacity. I have not come across a person who had so much vigor, passion and commitment for enhancing Tabligh as Syed Hassan Naqvi. He led AFTAB effectively with his team of motivated and passionate Board members and volunteers.

Syed Hassan and I travelled together to many Jamaats worldwide where he would spend his countless hours in discussions with the leadership of the Jamaats, Tabligh Boards, Heads of Madrasahs and students providing guidance and support and trying to understand how Africa Federation could better serve the Tabligh needs of the institutions. He had great love for Allah (SWT) and the teachings of the Ahlul Bayt (AS) and was very focused and conscientious on inculcating the spirit of learning with proper understanding of the Holy Qur’an starting from Madrasahs. Syed Hassan has been instrumental in the development and implementation of the World Federation Madressah Centre of Excellence (MCE) program from its inception in 2011. He played a pivotal role and was focused on training and development of current Madrasahs, involving Tabligh and Madressah Heads and Madressah teachers of the Jamaats under Africa Federation. His initiatives and tireless efforts paved way for the introduction of the MCE Tarbiya Curriculum, modern teaching methods in better understanding of Allah (SWT) and the teachings of Ahlul Bayt (AS) and the Holy Qur’an in several Madrasahs across the region. Syed Hassan was a good mentor and a helper. Over the years of working together, he was involved in several problem-solving situations which sometimes involved critical issues. He approached every situation with humility, sincerity and wisdom.

A few months ago he took up the additional challenge of serving as the Head of the Tabligh Committee of Dar es Salaam Jamaat. He had started working keenly on his plans and while he was in the initial stages of his new mission, he submitted to the Will of his Lord, the Most Gracious, the Most Merciful. I was deeply saddened by his death, especially having had the privilege to know of his plans to pull resources together to improve and promote overall Tabligh of the Jamaats under Africa Federation for better future of our children, our youth and the community in general. The last time I spoke to him was when he was at home in Dar es Salaam, a few days before he was hospitalized. We spoke at length on the preparations for the holy month of Ramadhan, Aalim’s postings, Moon Sighting etc., especially in light of the covid-19 pandemic. Marhum Syed Hassan Naqvi leaves a legacy as one of the longest serving Heads of Tabligh in Africa Federation. His significant contributions in the field of Tabligh and the revival of Annual Qur’an Competition in 2011 will remain cherished for many decades to come.

I have lost a dear friend, a brother and a supporter, who was always there in time of need. I will miss the happy and memorable moments we had especially during travels to Jamaats and when seeing his delight when his work paved way for a better tomorrow. I will miss his company for the Zanzibar mix, muhogo yakuchoma and soda khali we use to have most of the Saturdays when we met at the AFED Zahra Towers office. What is left are but mere memories of a great and noble man. I extend my heartfelt condolences to Marhum’s wife, children, sisters, Syed Mohamed Naqvi, Syed Ali Reza Naqvi and all the family members over the unimaginable loss of an important pillar to the family. 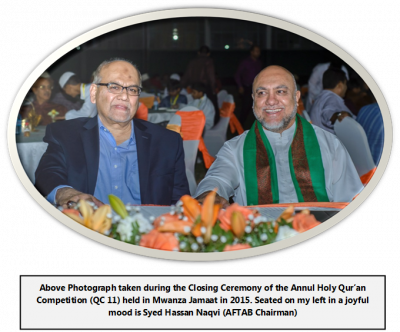 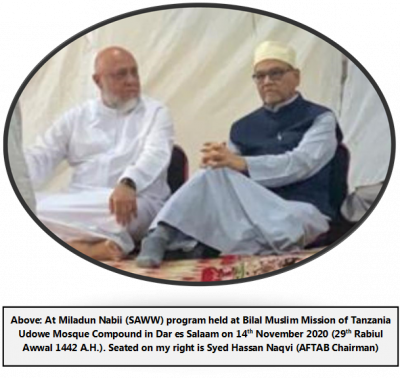 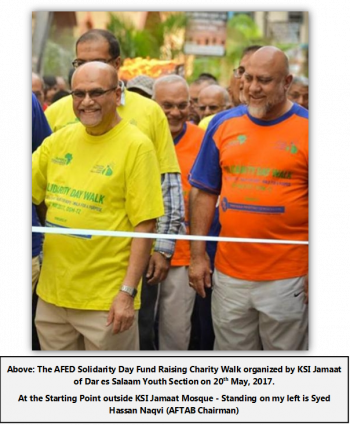 Published by: The Archives Section of Africa Federation