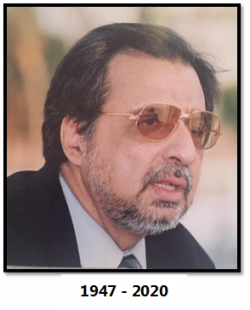 It is with deep sorrow that Africa Federation Secretariat received the sad news of the demise of Murrabbi Alhaj Mohib Ali Roshanali Dawood Nasser which occurred in Mumbai on Thursday 22nd October 2020 (5th Rabi-ul-Awwal 1442 AH).

Mohib Ali bhai born in Mumbai was a dedicated social worker embedded with deep passion for charity work in following the footsteps of his late father Marhum Murrabbi Roshanali Nasser and grandfather Marhum Murrabbi Haji Dawood Nasser. His death will surely leave a big vacuum in the regime of leadership in the community in general and India in particular. He continued for decades to organize and provide various welfare assistance to the deserving families all over India through the institutions established by his family.

As the family legacy, Marhum too had a soft corner for Orphans, Widows and the Poor, and catered for their needs through the Institutions; Imaan Foundation established in 1981 whose founder president was his late father, Murrabbi Roshanali Haji Dawood Nasser and thereafter Al-Imaan Charitable Trust came into existence in 1987 to streamline the activities of the Institution, which included Education Promotion Trust, Orphan Welfare Trust and Clean Water Aid Foundation essentially established to reach out to the needy families, orphans and widows. Marhum Mohib Ali with the assistance from Allama Syed Mohamed Musawi established the Head Office of all the Trusts in a new 4 storied building known as Najafi House situated at 159, Nishanpara Road in Dongri, Mumbai 400 009.

Mohib Ali bhai held various leadership positions in the community in Mumbai; he served as President of Mumbai KSI Jamaat for several years and Habib Trust for over two decades. He was also, as at the time of death the President of KSI Jama Masjid Trust Mumbai and Chairman of Al-Imaan Charitable Trust, Najafi House, Mumbai and was a Trustee of Anjuman e Faiz-e-Panjatani (Est. 1912).

Marhum was from the third generation of Nasser family, his grandfather Murrabbi Haji Dawood Nasser, the then President of Mumbai Jamaat was a frequent visitor to Dar es Salaam, Mombasa and other East African cities and had established close bonds with the Khoja Shia Ithna-Asheris of Africa since early 1900s, and the same tradition was continued by his late father, Murrabbi Haji Roshanali Nasser. Marhum Mohib Ali Nasser had many friends and wide acquaintances in East Africa, Aden, Mogadishu, Mozambique, Congo, Madagascar, Mauritius, Reunion, Comoros and in other parts of the world apart from the Indian subcontinent.

Mohib Ali bhai and his fellow Trustees of Anjuman e Faiz-e-Panjatani were actively involved in repossession process of the Musafarkhanas in Najaf, Karbala, Basra and Kadhmain from the Government of Iraq. These Musafarkhanas donated many years ago by the Khoja Shia Ithna-Asheris from East Africa and India specifically for the convenience of Zawwars of Imam Hussain (AS), were placed under the management of Anjuman e Faiz-e-Panjatani of Mumbai, India. Alhamdullilah, with their persistent efforts, the Trustees succeeded to repossess them and thereafter worked tirelessly towards the rehabilitation into modern Musafarkhanas now available to Zawwars at a minimal cost.

Mohib Ali bhai was also actively involved in the social and political spheres in India and was a Managing Committee Member of Indian Personnel Export Promotion Council (IPEPCIL) and the General Secretary of the Indo-Arab Society. Marhum was a humble and soft-spoken personality who will be remembered for his kind heart always willing to help.

Message from the Chairman of Africa Federation

“The office bearers of Africa Federation received the news of the death of Mohib Ali bhai with great sadness.Mohib Ali bhai had a passion to serve the under-privileged families of the community with sincerity and dedication. He was a person whose services were available for one and all for any kind of assistance one required, be it by members from our community or from outside our community.

Imaan Foundation and Al-Imaan Charitable Trust have lost one of its vital pillars, his departure is not only a huge loss to the family but to the entire community globally. His services to humanity shall remain always cherished by many to whom he, his family and the two institutions have reached out in the past many decades. He was a close friend to many of us from mainland Africa, Madagascar, Réunion, Comoros, Aden and Mauritius. We have lost a “Mohib” of Aba Abdillah al Hussain (AS), a dear friend and a kind hearted human being.

The Africa Federation was highly indebted to Mohib bhai and his father for having charted out in advance the logistics, travel schedules and hotel bookings for a volunteering delegation of four office-bearers and one Councillor led by the Chairman of Africa Federation, Alhaj Habib bhai Mulji in the year 1995. They both gave prior notice to the Jamaats and institutions to be visited in the course of an extensive historic tour of India which covered many cities across India. The full report of the tour appeared in the Federation Samachar issue of April, 1995.

On behalf of my colleagues and myself we convey our heartfelt condolences to Marhum’s wife, children and all the family members on this bereavement”.

Message by the Vice Chairman of Africa Federation

Below, a brief message by the Vice Chairman of Africa Federation, who was a close friend of Alhaj Mohib Ali Nasser, had the following to say:

“I use to call him fondly just Mohib bhai, we had established cordial relationship since the time I look over the helm of the Central Health Board (CHB) of Africa Federation in the early 1980s, and he was my first contact person in Mumbai during the time CHB was entering into a new area establishing contacts in India for medical services with hospitals, doctors etc. for our community members who needed treatment in India, as Mumbai was the stepping stone in India. Over a period of time, we came to know each other more closely. He was a great help, especially when we had emergency needs of funds or patients falling seriously ill, he would always be there to assist without hesitation, while sometimes I used to call him at odd hours and he would always respond wholeheartedly.

His office in Palekar Chambers 12, First Marine Street located at Dhobitalao would be frequently visited by several visitors from all over the world; some would come for their own work and some for just social meeting, and he would spend his time with great courtesy. Visitors who happen to come during lunch time would not leave the office without having lunch with him, this was his amiable hospitality to visitors and friends.

I still cherish the Friday afternoon (after Namaz-e-Jumaah) lunch and meeting at Najafi House; upon coming across a visitor from outside Mumbai or India he would insist on him to join for the lunch.A very forthcoming kind hearted person, would always offer transport whenever he meets a foreigner visiting Mumbai either for medical or even for private visit – such was his humility and hospitality. 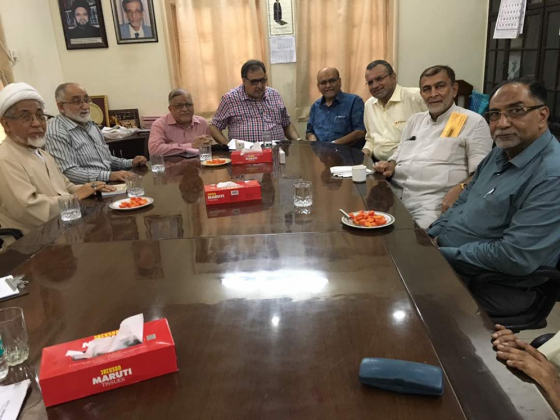 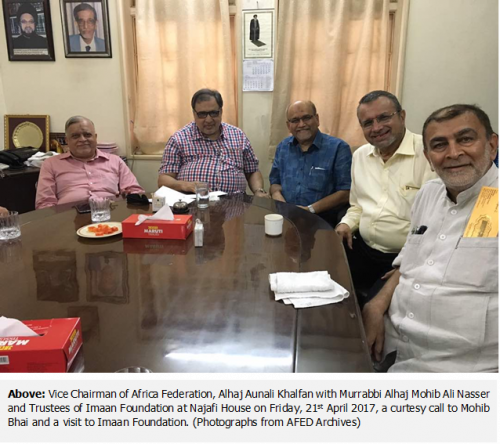 Marhum is survived by his wife, Nasreen bai daughters Fatima and Tahera and son Mohammed Ali, may Allah (SWT) grant them and all the family members patience to bear this irreplaceable loss in the family.