Formation of the World Federation of KSIMC 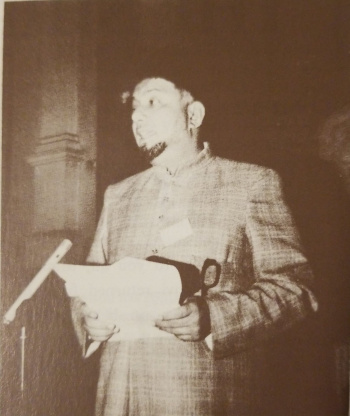 The World Federation of Khoja Shia Ithna Asheri Muslim Community (World Federation) was established at a Constitutional Conference held at Hammersmith Imambada in London for the purpose between 15th and 17th Oct 1976.

The first Constitutional Conference of WF was convened on October 15th 1976 in London at Hammersmith Imambada. The Constitution was discussed and approved at the Conference. The following were present: 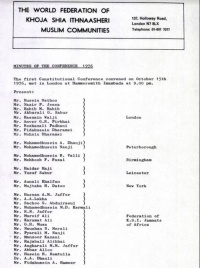 Extract from the Welcome Speech by Husein A. Rahim Esq. M.B.E.

...... It is a historic and unique gathering with the aim of uniting all the Khoja Shia Ithna Asheris existing in any corner of the globe into one and single entity. It is not only a bold but a worthy venture which has been necessitated by the exodus of thousands of our brethren and sisters from their previously established homes to far and distant countries scattered round the globe. Though spiritually we have always been one, having been created, according to our Imam's Hadith, from the residue of Ahlal Baat's clay, we have been for centuries, owing to distance involved, living physically as separate entities under the auspices of local Jamaats. Though geographically separated, the Khoja Shia Ithna-Asheri community throughout the centuries have had a common culture and a common heritage. Our Culture has always sprung up from our inherent ambition and desire to be closely associated with our brethren in faith and to share their joys, sorrows and plights, and it was this instinct which inspired us to being knitted together, wherever we lived, in the form of Jamaat, which the Ithna Asheri Khojas have always considered to be the main blood-artery of the community......

Brethren, the idea therefore of forming a World Federation is a blissful one. Whether we call it a "World Federation"or a "World Confederation" (because it would embrace also the present African Federation) is merely a matter of nomenclature. The aim is to unite the community for common good both spiritually and temporally......

After the formation of World Federation, correspondence related to various Jamaat and Shia Organizations started coming in. There was a unanimous demand that the President of the World Federation should physically travel to all the countries and study the situation. This was really appreciated but was virtually impossible.

In view of this persistent demand, Maulana Syed Amir Husein Naqvi was appointed on behalf of the President and the World Federation to visit Far East and Japan, Canada, USA, Europe and the United Kingdom to study the situation on the spot as it were and to make a report to the World Federation. Maulana Saheb left Nairobi on 3rd June 1977 with a complete and comprehensive dossier at his disposal.

Maulana Saheb visited Pakistan, Hong Kong, Thailand, United States, Canada, Holland, Sweden, Switzerland, UK and France. It took four months and it was a successful tour. On receipt of full report from Maulana Saheb, it was possible for the Executive Council to study the same and propose projects in respect of the countries concerned.

"Maulana's intellectual approach to our religious questions, his sermons and lectures made the mission not only successful, but also proved very useful".

IF WE CAN GET AN AALIM OF HIS CALIBRE FOR ONLY ONE YEAR, SHIAISM IN THAILAND WILL CERTAINLY SHINE BRIGHT

Later, at the request of Birmingham Jamaat of the U.K., Maulana Saheb was appointed as a resident Aalim in the said Jamaat for one year. The World Federation committed to the tune of GBP. 500 towards his Hadiyya per annum, with a clear written understanding that he would be made available for the World Federation tours etc. whenever required. 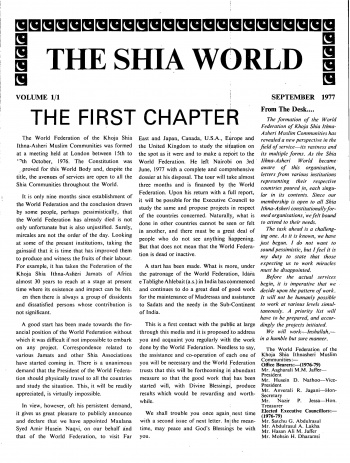 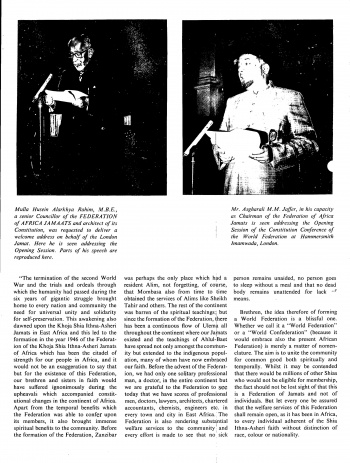 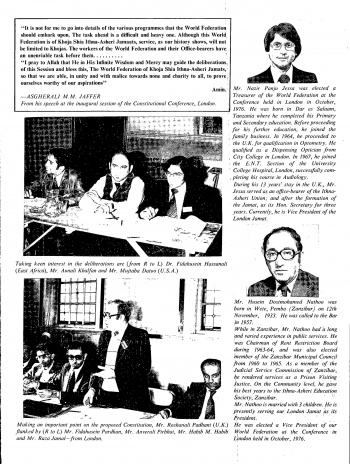 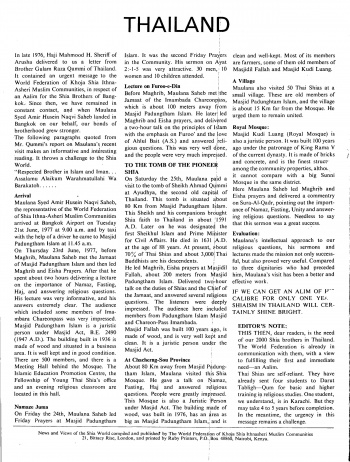 The formation of the World Federation of Khoja Shia Ithna Asheri Muslim Communities has revealed a new perspective in the field of service -its vastness and its multiple forms. As the Shia Ithna Asheri World became aware of this organisation, letters from various institutions representing their respective countries poured in, each singular in its contents. Since our membership is open to all Shia Ithna Asheri constitutionally formed organisations, we felt bound to attend to their needs.

The task ahead is a challenging one. As it is known, we have just begun...

We will work- Inshallah, - in a humble but sure manner.

The World Federation commissioned a Medical Mission manned by two Doctors, namely Dr. A. G. Lakha and Dr. A. G. Moledina. The whole exercise cost WF about K. Shs. 50,000. Nearly 2000 Hajis including Muslims from various countries and of various Nationalities. The reports from Hajis were very encouraging.

Dubai Jamaat- It had grown steadily in strength and their first requirement was an Imambada. The Sheikh of Dubai, Sheikh Rashid, had made an offer of a piece of land for Imambada, through the good offices of Maulana Syed Mahdi Al Hakim, the son of our late Mujtahed Agha Syed Muhsin Al Hakim. Dubai Jamaat raised 160,000 Dhirams from amongst its member and requested for assistance from the World Federation. WF paid 10,000 pounds to them.

During 1976-77 World Federation gave educational assistance of 75 pounds per month to the son of Agha Syed Mehdi Shustri in Luten, U.K.

Masoomeen Trust, India - In India, WF established a Trust known as Masoomeen Trust. This trust has been registered by the Indian Government as a tax-exempted charitable Trust. The said trust started functioning under the auspices and directive of Haji Zakariyya as Chairman. Haji Gulamalibhai Bhanji is the Hon. Secretary and Managing Trustee. This trust represented all of WF interest in India, and continued to do so till India had its own All-India or Zonal Federation and its Secretariat.

The following are the principle projects in India

Under the patronage of the World Federation, Idara e Tablighe Ahlebait (a.s) in India commenced to do a great deal of good work for the maintenance of Madrassas and assistance to Sadat and the needy in the Sub-Continent of India.

During 1978, as a Zakir for Muharram, Mulla Saheb visited Madagascar. We had 14 Jamaats in Madagascar and he was able to meet a cross section of the members from nearly all Jamaats.

In Feb/March 1978, Mulla Saheb visited Vancouver where as President of World Federation he laid the foundation stone of the Imambada. Out of the total cost of USD 200,000, World Federation committed to pay USD 50,000.

In Mid-year 1978, Mulla Saheb visited Pakistan where the World Federation received a donation of 100,000 rupees. These amount was distributed for various projects/individual in Pakistan only.

The first Ordinary Conference of The World Federation of Khoja Shia Ithnaasheri Muslim Communities was held at 30/32 Southerton Road, Hammersmith, London on 25/26 October 1979. The following delegates and invitees attended the Conference.