Akberbhai Kermali Jessa was born in Dar es Salaam on 29 March 1930 and passed away in Toronto on 23 December 2019 at the age of 89. He was the husband of Marhuma Khairunnisa Mohamedali Panjwani, father of Syddika Inayat Alidina, Sajida Tanveer Kara and Salim Jessa.

Akberbhai Jessa was the eldest child of Kermalibhai Jessa. He spent most of his life in Dar es Salaam although he once had a shop in Songea too. In Dar es Salaam he worked at a bank, offices of Car & General and was also a freelance salesman of auto spare parts. In the early 1970s he opened a shop opposite what is now Zahra Towers. Later on, he converted the shop to a restaurant called Paradise Restaurant.

Marhum Akberbhai was a long serving member of the Dar es Salaam Jamaat. In 1957 he was among the first 13 youths who started the Husseini Society - an institution established to train children in recitation of Namaaz on a daily basis and provide religious education. He was appointed Hon Treasurer of Husseini Society. In 1966 he became President of Husseini Society for a period of 4 years upto 1970 after which Aunalibhai Salehmohamed became President. Akberbhai had taken over the management from Marhum Allama Syed Saeed Akhtar Rizvi who was managing it prior to him. One of the ways he used to encourage boys to attend Husseini Society was to take them home, show them movie on projector and arrange tabarruk.

Akber bhai was a member of the Managing Committee of Dar es Salaam Jamaat in 1974 under President Alhaj Rajabali Amarsi Alibhai. He was an extremely dedicated worker in several fields. He served as Mukhi of Dar es Salaam Jamaat for many years and also helped the Trustees. In the 1970s, he was well known for his Zakiri especially after the introduction of Sunday Kabrastan Majalis following the car driving ban on Sundays. He also ran Mehfile Imame Zamana (as). During the era of bread shortage, it was his idea to arrange bread as tabarruk at the Mehfil. During Ramadhan of 1970s he regularly came to address the children of Husseini Society at Mehfile Abbas (as) after the Darsa program with his interesting anecdotes which the children enjoyed a lot

Akberbhai spent his whole life in the service of Dar es Salaam community. He was an example of selfless dedication and sincerity. He migrated to Canada to join his son Salim in 2009. 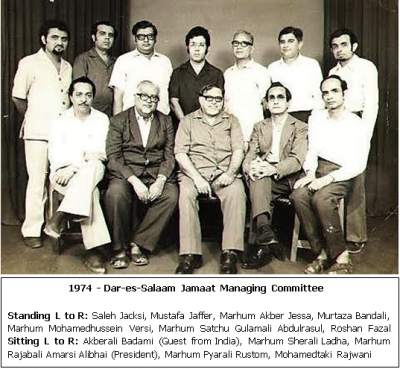 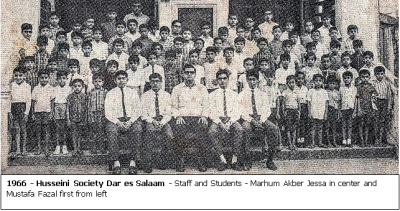