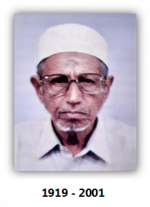 Marhum Najafali was born in 1919 in Zanzibar. He was the first born in the family of Mohammadtaqi Rehmtullah Alarakhia Tejani. He received his grounding in religion from the famous Faize Night School (Madressa) in Zanzibar. This proved to be a foundation of all his future endeavors. He graduated from this Madressa in 30s and was among the first batch to qualify before proceeding to become an eminent teacher. He taught Qur’an, Dinyaat and Urdu.

He was a source of inspiration to many even in his younger days and his inspiration came from an eminent personality, Allamah Rashid Turabi of Pakistan who was no less inspiring in his own way, this inspiration led Marhum to start reciting majalises in the early sixties. Fate took a turn when he left his beloved Zanzibar to settle in Dar es Salaam in 1968. His reputation made Dar es Salaam Jamaat to decide to take him on immediately on board to teach religious education in a few primary and secondary schools. He went on to assist in the preparation of the Husseini Madrassah syllabi whilst using his teaching ability to impart knowledge of the Qur’an, Aqaid, and Fiqh to the students at Husseini Madressa. 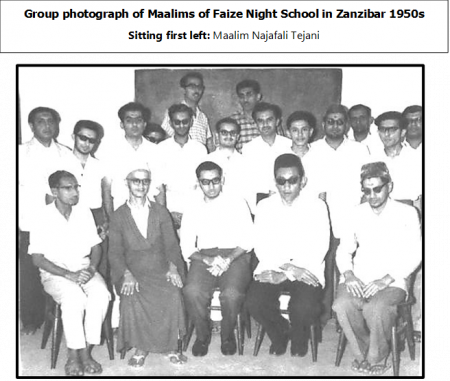 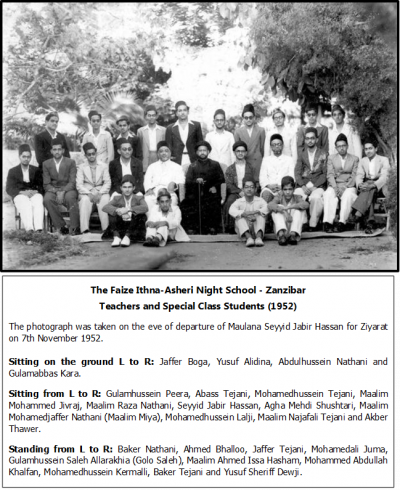 Today there are multitude of personalities who owe their religious grounding to him. Yet at no time was it heard from himself as he was extremely modest, very affable and while his sagacious presence was always there, he never considered it necessary to make his presence felt. The resident Aalim in the 70’s Sayed Aqa Haider Saheb was among those who was impressed by Marhum’s unassuming personality. He recommended to the Jamaat that he be made in charge of all activities that took place in the mosque. This is something that he continued doing till his last days. Through this he encouraged youngsters to come forward to recite and many have gone on to become accomplished reciters. These services included leading prayers in the absence of the Resident Aalim, reciting Nikahs, advising the Tabligh committee on their activities as well as ordering of books. His presence at the mosque was similar to that of an institution. However, it was his activities outside the mosque that endeared him to the masses at large. His pious nature led people to trust him with Khairat and Sadka funds for distribution to the poor and needy. This arrangement worked admirably for there were many of the needy who did not wish to identify themselves. His discretion and ability to discern those who were really in need led to collection and distribution without bias or prejudice.

His knowledge and experience also became invaluable during his numerous trips to various Hajj, Umrah and Ziyaraats. His advice was sought by many and normally he was among the first to arrive at the mosque always whispering a kind word to one and many. Alas, his presence amongst us is no more. He passed away in Dar es Salaam on Sunday 7th January, 2001. “From earth We created you and into it we shall send you and from it will we raise you a second time.” (20:55). 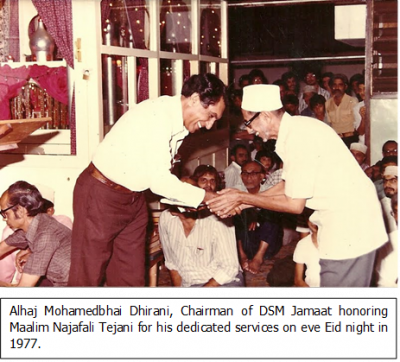 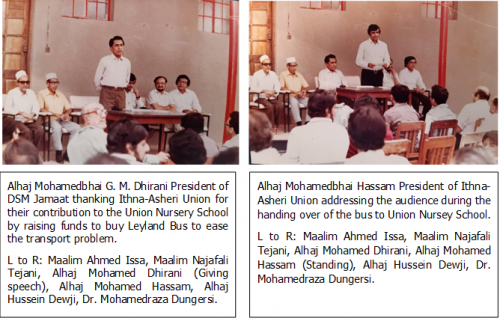 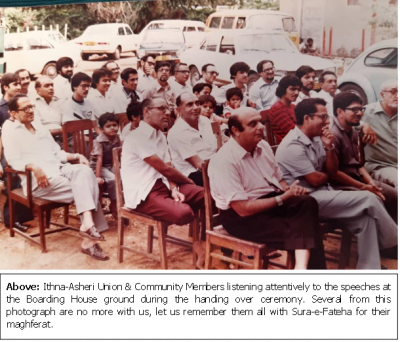