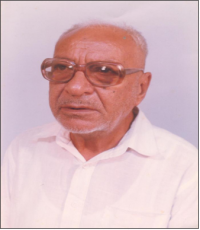 Marhoom Mohamedhussein bhai Bandali Versi, fondly known as M B Versi was born in Lindi on 14 December 1921. He pursued his education in Lindi and then joined the family business. Marhoom was keen and diligent in serving the community and also deeply committed in the public services.

Marhoom was reputed to be a kind and generous person who had a pleasant disposition, always provided wise counsel and helped many in deserving situations whenever the need arose. He was a dedicated and conscientious member of the community. He was a regular participant in the Africa Federation’s Supreme Council meetings and known for his candid and clear views. He was for several years an invitee to the Africa Federation Triennial Conference, in which he made useful contributions in discussions on local and pan-African issues related to community matters, just as he did to the general business community.