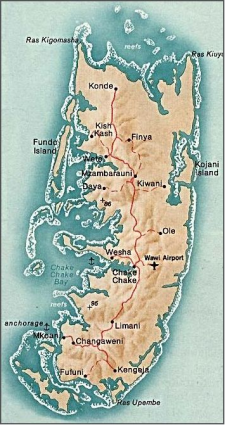 Pemba known as 'Al Jazeera Al Khadra' (the green island, in Arabic) is an island forming part of the Zanzibar archipelago, lying off the east coast of Africa in the Indian Ocean. It is situated about 60 km to the north of the island of Zanzibar. It lies 50 km east of mainland Tanzania. Together with Mafia Island (south of Zanzibar), they form the Spice Islands. The estimated population of Pemba Island is about 300,000, with an area of 980 km². The island of Pemba currently has 4 districts; they are Chake Chake, Mkoani, Wete and Micheweni.

Pemba Island is the untouched and pristine island of great beauty and fertility. The mosaic of forests, swamps, mangroves, hidden beaches and lagoons is scattered with the ruins of mosques and tombs mostly reclaimed by the forest – sites that date back to Arab domination when Pemba Island was seized by the Sultan of Muscat (Oman) in the 17th century. Pemba was once the world’s major clove producer, making to almost 70%. 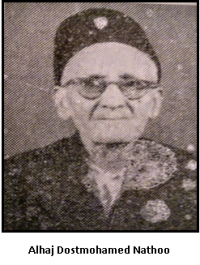 During the 1914 World War, the Mtemani area became commercially active and our community members moved in gradually. Wete at the time was in the early stages of development, it was like a small village. There were no proper roads, water and electricity. Wireless telegram communications started in 1914. Bullock carts were used for movement of goods. Donkeys were used for travel purposes. Since the donkey was the only method of travel, no one felt ashamed doing so. The first motor vehicles arrived in 1926. Telephone communication for public started in 1932. Piped water was installed in 1937 and electricity in 1958. 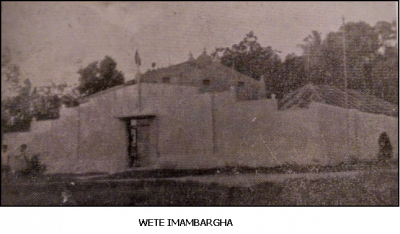 Initially there was a single graveyard for Ismailis and Ithna-asheris. As differences grew, Alhaj Khakoo Ramji donated his Shamba (farm) for use as a cemetery for the community. Alhaj Kermalli Peera Walli also donated an adjacent farm for the cemetery. A simple construction was built at the cemetery and this is used during Thursday, wafat and khushali majalises.

The cemetery is enclosed by a stone wall on three sides and wire fence on one side. Members donated Shs: 5000 for this project and the Jamat contributed Shs: 5000. As a result of increase of population, the need for construction of a school became apparent. In 1927, the Indian Association collected donations and constructed a large room and employed a teacher to teach upto Std 5 Primary level. In 1945, the Government took control of this school and has been running it since then. For the last seven years (1953), children are being taught the Holy Qur’an by a local Muallim. Some members of the community provide religious education to children on voluntary basis during evenings. 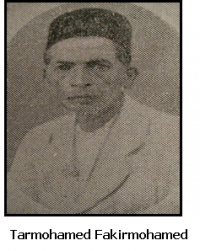 Tarmohamed Fakirmohamed left India in 1896 at the age of 12. He arrived first in Zanzibar and then travelled to Bagamoyo where he worked for an Ismaili community member for four years and then returned to India. In 1904, he travelled again to Pemba via Zanzibar and joined his brother Suleman Fakirmohamed in his shop. He was with his brother until 1910, after which he opened his own shop in the Chachani area, currently known as Chake Chake.

Development was in rudimentary stage. Houses were mostly made of corrugated Iron sheets with a few sturdy ones made from stone. There were no cars or vehicles of any kind. There was no electricity or piped water. Development was non-existent in what is now called the commercial area. If someone had to go to Wete-Mkoani, he had to plan a week beforehand. It would take six hours to travel by donkey. For those who opted to walk, it would take 10 hours and give one good exercise. The total distance was about 20 miles. 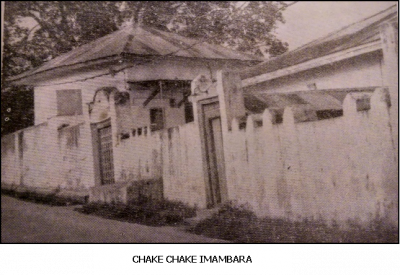 There were about 20 Ithnaasheri families in Chake Chake and there was a Mosque and Imambargha, majalis were being held regularly during occasions. Earlier there was an Ismaili school. Later on, the Indian Association started an Indian Public School which continued upto 1934. Then the Bohora community started their own school. The Indian Public School changed its name to Hindu Mandal School. During this period, MKSP Menon from India visited the community and advised that instead of having separate schools, we should all join and have one school so as to obtain grant from Government. The idea was accepted and a single Indian Public School was re-established. This school operated for four months and again there were misunderstandings which led to the old system of separate schools.

Mr. Hussein A Rahim was the Chief Secretary of the court at that time. Due to his contacts he was able to obtain a monthly assistance of Shs: 75 from the Mohamed Merali Waqf Estate. He used this assistance to start a Madressah for teaching Holy Qur’an recitation. In 1936, the trusteeship of Mohamed Merali Trust was transferred from Haji Hussein Sheriff Dewji to Mr. A. R. Shivji and H. D. Kermalli.

The Madressah Muallim would teach Holy Qur’an to the children in the morning and Mr. Hussein A Rahim and Mulla Hassanali Noormohamed Kanji would teach religious education in the afternoon on honorary basis. Primary education was provided at the Madressah in Gujarati language. Mrs. Bilimoria was employed to provide this education. After some years, a male teacher was employed following the death of Mrs. Bilimoria. After the resignation of the male teacher, Mr. Abdulrasul A. Rahim was employed at a salary of Shs: 75 per month. The expenses for the Madressah were met from the Trust in Zanzibar and from the funds donated by members of community. The school and Madressah ran very well upto 1941. A misunderstanding which ensued in the Jamaat led to a letter being sent to the Trust which stopped all assistance. This resulted in breakup and our children had to join the Hindu Mandal School. In 1945, the Education Director, Mr. Grant visited the community and advised that a single school be established and that the Government would give a grant of 66%. The separate schools were thus closed and a single Indian Public School restarted in 1957. The school is Government owned and has classes’ upto Grade 8.