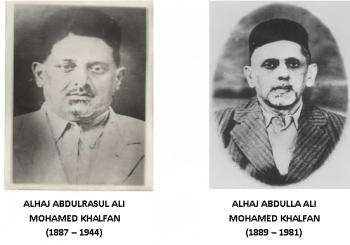 Khalfan was a young man, newly married, when his family in Gujarat, India, allowed him at his insistence, to board a dhow for the port of Lamu in Kenya like the others of his age who had proceeded. He intended to return and collect his wife the following year. That sadly did not happen. The sea at the Lamu harbour was extremely rough when the dhow anchored. The roving boat taking him with his baggage to the land capsized. He died of drowning and the body was buried in Lamu. That was about the year 1835.

The news of death reached the family and the pregnant wife months later when the seasonal sailing wind changed for dhows to make a return voyage to India. That tragedy however, was not to mark the end of the adventure and determination of migration for the family. The child born in India was named Mohamed. He too as a young man, followed the sea-path of his father twenty years later, in about the year 1855 with a difference. He landed in Zanzibar.

Mohamed, son of Khalfan, married one Lidubai whose paternal lineage of four past generations is remarkably still known as Hema Parpia Hedau Devani. There are a few families in East Africa whose paternal lineage from the present generation of the youngest child, is traced to the same Devani. It is rare to know the names in a lineage of past 11 generations spanned over three centuries. In the case of the forefathers of Mohamed, son of Khalfan, some had lived in Jamnagar and others later in Bhavnagar.

Mohammed, son of deceased Khalfan had his first son born in Zanzibar in 1860, and named him Ali. He was the first East African born in the family. When Ali grew up he engaged himself as a broker-cum-trader with good contacts with the local importers and exporters. With the ruling market knowledge on his finger tips, the Sultan of the time, most probably Sayyid Sir Hamad bin Thuwaini Al-Busaid (1893-1896) and later Sayyid Sir Hamoud bin Mohammed Al-Said (1896-1902) would seek information from Ali, among few others, regarding the market trends.

Ali was married to Rehmat, daughter of Mohamed Sheriff Parpia Devani. She was a sister of the person who later became Zanzibar Jamat-khana’s Mukhi (top rank then in Jamat-khana). Ali had two younger brothers, namely, Gulamhusein and Hassan. The brothers were also prominent among the leaders in Jamat-khana in Zanzibar until in about the year 1902 when all the three brothers and their families joined the Khoja Shia Ithna-asheri community. Gulamhussein’s family later moved to Mombasa while Hassan’s family continued to live mostly in Zanzibar. Ali Mohamed Khalfan had two elder sons - Abdulrasul who was born in 1887, and Abdulla in 1889. In about the year 1915, he sent the two sons with their families from Zanzibar to settle in Mombasa which was growing in commercial importance.

Abdulrasul took the job of a broker with a large long established reputable commercial British company; called Smith, Mackenzie & Company which, apart from being a shipping agent, imported various items of daily consumption and had its Branch offices and agents spread in the interior mainland for marketing the imports. 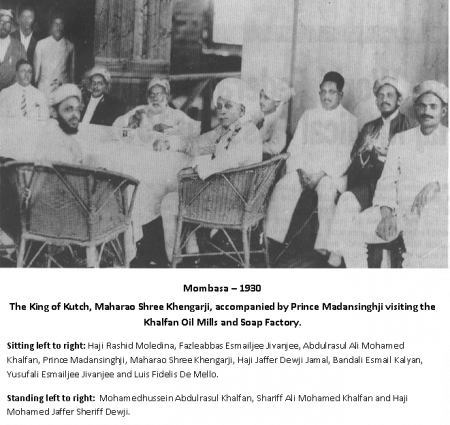 Abdulla ventured into the industry of soap-making on a small scale and prospered. In 1920s, Abdulrasul joined Abdulla to build and operate a large modern two storied Soap Factory with units of copra expelling machines for producing coconut oil for use in soap-making and marketing the rest as cooking oil. The industry was in the name of Khalfan Oil & Soap Manufacturing Company Limited. Smith Mackenzie acted as the agents for marketing the soap far and wide across Kenya through its wide network of agencies.

The industry became very much profitable. In 1930, when the King of Kutch, Shree Khengarji visited Mombasa with his Prince, Madansinghji, a party was held in his honour on the upper floor of the factory building and a few dignitaries of Mombasa were in attendance. The Picture shows the gathering. However, Ali and Abdulla were not present as they were on a pilgrimage to Iraq.

Smith, Mackenzie & Company based in London had an associate company known as East African Plantations Limited in Kenya owning a couple of large and well-tended coconut plantations of different sizes in Mombasa. The Khalfan Company purchased from them in late 1920s the largest Plantation which was huge, then famously known as the Ghasi Estate along the Kenyan coast some 20 miles from Mombasa town at the price of Indian Rupees 500,000/- . The Khalfan Company used to buy their crops/copra for milling at the Factory.

Soon after the purchase, a severe world recession set in tumbling the market price of copra by almost half to Rs.1.50 per Frasla (36 lbs) while the bare cost of production was higher than the market price. There were no buyers for such a huge asset even at a lesser price. However, the E.A. Plantation Company purchased the Ghasi Estate back in an exchange for a slightly small plantation. The factory had to be sold off to make the exchange of Plantations possible. This plantation remained with the family until 1945 when it was sold.

In the meantime, a similar soap industry with a number of copra oil expellers was established on a large scale in Zanzibar in 1932. When the exports of coconut oil were allowed for the first time in 1950s, after decades of restriction, and the export business became booming, a few new parties entered into this sector of industry and with that entered the unethical practices in the export business. The oil was exported in second hand drums and the short weight found at the ports of destination was treated wholly as leakage occurring in the course of shipment. As leakage was insured, the importers suffered no loss. The family business could not stand against this type of unethical competition involving invoicing on inflated custom shipment weight, and the short arrivals were assessed wholly as leakage; therefore, the business operation of the family was suspended in 1959 after the attempts to get the authorities to redress the situation proved fruitless. However, later the factory, while inactive, was nationalized, like those of others, soon after the Zanzibar Revolution in 1964. The fifth and sixth generations are now in various sectors of economic occupation in certain countries; some are still in Tanzania and Kenya while many others are long settled in the West. They too bear the name of Khalfan of Lamu of 1835 as their surname.

Abdulla Khalfan together with his three friends in sports, Alhaj Habib Abdulla Janmohamed, Alhaj Hassanali Gulamhusein Khaki and Alhaj Hussein Karim Hirji were the four founders of the Jaffery Sports Club in about the year 1922. Abdulla was not able to continue his interest in sports after he had completed his two years term as Chairman of the Club in 1926 because of the pressure of the family business. Later other prominent members of the community in Mombasa also played their various roles to bring the club to the prestigious state that it has been for decades now.

Ali’s two elder sons, Abdulrasul and Abdulla served as the President of Khoja Shia Ithna-asheri Hujjatul Islam Jamaat, one after the other. Hujjat was a small Jamaat while Kuwwatul Islam Jamaat was larger of the two. Abdulla succeeded his brother, Abdulrasul when the latter died in 1944 while holding the post. Abdulla Khalfan and Alhaj Husein Sheriff Dewji while holding the post of President of the Hujjat and Kuwwat Jamaats respectively were able to bring the Jamaats closer in co-operation and fraternity and this became much easier because both Abdulrasul and Abdulla had married the daughters of Haji Jaffer Dewji Jamal of Mombasa, the cousin sisters of Huseinbhai Sheriff Dewji Jamal.

With this unprecedented close relation between the two Jamaats, they were able to get the Zanzibar government to sanction release of rice and cooking oil for Muharram Niaz when there was in place a strict rationing system of essential food commodities during the later part of the Second World War. Importations were restricted and irregular. Zanzibar as compared to other towns in Africa had the highest population of Khoja Shia Ithna Ashris numbering almost 5000.

The other dividend from the close relation between the two Jamaats was the first occasion of Husain Day held in Old Portuguese Fort facing the Forodhani Gardens at the seafront in Stone Town of Unguja, It was organized by the two Jamaats jointly in 1945. It was a grand occasion where Crown Prince Abdullah represented the Sultan of Zanzibar. Invited also were the high ranking British officials and dignitaries from various local communities.

In order to ensure that Husain Day became a regular grand annual function under the joint auspices of the two Jamaats, regardless who the respective leaders were, Abdulla Khalfan, with the consent of the President of the Kuwwat Jamaat handed over the role of organizing Husain Day to Ithna-Asheri Volunteers Corp which was affiliated to the Kuwwat Jamaat. The Corp never failed the community in this expectation.

When Abdulrasul Khalfan died at the age of 57 in 1944, in Zanzibar while in the post of the Hujjat Jamaat President,, the Kuwwat Jamaat and the Hujjat Jamaat both jointly in an unprecedented spirit of brotherhood and as a joint mark of mourning declared closure of all business activities in the community for his burial ceremony which took place in the morning hours before noon. Abdulrasul Khalfan was known to have raised at different times in Zanzibar some orphan girls who had lost both parents. Incidentally, the deceased parents were from the Kuwwat Jamaat. One of the girls when adult was married within the family. At the request of the members of the Hujjat Jamaat, Abdulla Khalfan took over the post of President to complete his brother’s tenure.

This life is but a fleeting moment and yet death is faster in overtaking - often sooner than later; and generations in succession vanish from the scene like they never existed. What we were in the sight of Allah (swt), and not who we were in the sight of men, was important if only this was known to us all before death struck. Alhaj Abdulla Khalfan was the father of Mohamed Khalfan (Dar es Salaam) and Alhaj Abdulrasul Khalfan was the grandfather of Aunali Kassamali Khalfan (Dar es Salaam).