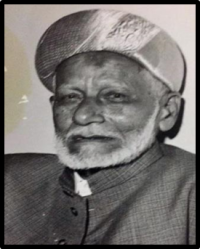 Haji Janmohamed’s grandson Habib bhai was born in Lamu in 1896 and later migrated to Mombasa. He married Sherbanu daughter of Gulamhussein Daya. He worked as a Law Clerk at the High Court of Mombasa for nearly 40 years. On retiring he worked with a Law firm Byson Inamdar and Bowyer he retired permanently at the age of 65. Habib bhai also served as a Chairman of KSI Bustani Jamaat and other institutions of the Jamaat for nearly four decades. Marhum Habibbhai together with three other elders of the community, united the youths of the Jamaat under one banner, the Ithna-Asheri Sports Club which he and other elders of Mombasa founded around 1921.

Habib bhai passed away in 1974 at Mombasa. He left behind four sons Hussein, Ahmed, Mohamedjaffer and Gulamabbas (Tommy); and four daughters Kulsum, Khatija, Fatma and Rubab.