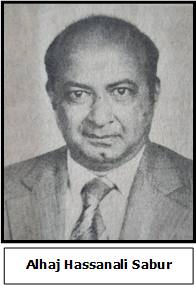 Marhum Hassanali bhai Sabur was originally a resident of Uganda. He was born at Mbale, Uganda on 4th September 1923. Hassanali bhai had been very active in community affairs for a long time.

He served as the Secretary, Treasurer, Vice-President, President, Trustee and Committee Member at Mbale Jamaat during the period from 1951 to 1972. In 1972, when Idi Amin Dada expelled Asians from Uganda, Hassanali bhai migrated to the United Kingdom and settled in Leicester. There, he served as a Managing Committee Member of the Jamaat from 1976 till 1978. He later became the President of the Jamaat and held the post till his death which occurred on Wednesday, 17th February, 1988.

Marhum Hassanalibhai was an active leader whose attendance in majalis and other Jamaat activities was very regular. Members of the Jamaat, particularly those who have worked with him will always remember him for his tireless efforts and services to the Community.