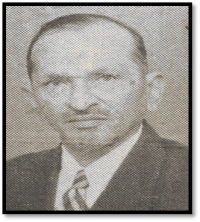 Deputation Member for Foundation & Other Funds - 1958

At the Africa Federation Conference held in Arusha in the year 1958, a resolution was passed to form a deputation (delegation) to raise funds in the following countries

After the collection, all the deputation members were awarded a Citation of appreciation for their exemplary and dedicated work for the collection of good amounts. One of deputation member was Alhaj Gulamalibhai Jetha. It is our humble request to all Community members to share with the Archives Department, citations awarded to their family members who were part of this team.

It is with deep sorrow and regrets that we note the demise of Alhaj Gulamalibhai Jetha on 27th October 1985 in Dar es Salaam. Marhum Gulamalibhai has been a good and devoted Social worker and community leader for many years. The death of Alhaj Gulamalibhai Jetha marks a turning point in the history of Mwanza Jamaat. At the time of his retirement from active participation in Jamaat affairs quite a few years back, he had by then more than four-decade of services to the Community to his credit.

Born in Lalpur, India in 1901 he migrated to Tanzania in 1920. After working with Messrs. Nurmohammed Jessa and sons for a few years he established his own business in Lindi. From Lindi, he moved to Tabora and from there to Mwanza. He was one of the pioneer businessman and leading industrialists of Mwanza. He also established a ginnery and a rice mill in Masaka, Uganda. At the Community service front, Marhum served Mwanza Jamaat in various capacities and was its President for a period of 25 years. His contribution in time and substance towards the construction of the Mosque and Imambargah in Mwanza is substantial. He was a staunch supporter of the Africa Federation and the recipient of a special citation by the then Chairman of the Federation, Late Haji Ebrahimbhai Sheriff Dewji for his efforts and support in raising the Federation Foundation fund.

The Community has lost a wise and compassionate Social worker. Through whose selfless services, the lives of countless persons have been touched and richly rewarded. The loss to his family members, friends and relatives, is irreplaceable things that happen to us, but we can at least control the way we face up to them. Therefore, while we offer our heartfelt condolences to family members of Marhum Gulamalibhai, we pray to Allah (SWT) to give them courage and patience to pass through this difficult period. May Allah receive him with the proximity of our Chaharda Masumeen A.S. Ameen

Translation of the Gujarati Citation

As a servant and President, I consider myself to be honoured to present to you this Citation, on behalf of the Federation of Khoja Shia Ithna-Asheri Jamaats of Africa, for your role in serving the Community with utmost zeal, untiring physical efforts and great financial contribution.

Financial constraints had started to limit the activities of the Federation and there was a great possibility of these activities to come to a halt at any time. There was despair all around. There also arose people who confidently said that observation at the financial situation all around did not give any hope of raising more than Shs 100,000 for any efforts of starting a drive to collect funds. During these difficult times, you strongly encouraged us and stood shoulder to shoulder with us in our common aim. I wish to pay tribute to your great encouragement with gratitude and a happy heart.

Ignoring physical challenges due to age and despite business commitments, you decided to leave the comfort of your home and join the team at your own expense, in the lengthy and arduous journey to collect funds. Due to your important contribution, the Foundation Fund reached Shs 725,000 and the Scholarship Fund reached Shs 65,000. The Council would also like to note your personal and excellent contribution to the Fund.

As a result of your selfless efforts, the community has attained great respect and for which I wish to congratulate you sincerely. I pray to Allah that he continues to give you the strength to serve the Community with your physical efforts, great spirit and financial contribution.