Al Hajj Dharamsi Gangji was born in 1882 in Nanglepur, Cutch, India. He was the eldest of six male sons of Gangji Sivji, a Khoja subsistence farmer. The family practiced the Shia Ismaili sect of Islam. The summer monsoon rainfall is the major prerequisite of agricultural productivity in Cutch, and when the monsoon failed in 1896 and again in 1899, there was a severe drought followed by famine. The famines of 1896–97 and 1899–1900 in India affected almost the entire subcontinent, causing severe distress, debility, and mortality, killing over four million people. The effect on the Gangji farm was devastating. Life was very hard for the family and in 1899; Gangji Sivji decided to send his eldest son, Dharamsi, to East Africa. 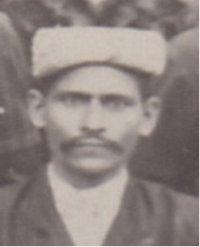 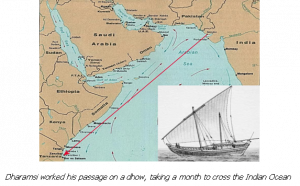 Dharamsi arrived in Zanzibar not knowing a soul and faced with a totally alien environment. It shows the 17 year old’s character that in no time he managed to secure employment with a trader, agreeing to work for two years at a salary the equivalent of $20 per year. His employer allowed him to sleep in the store house on bags of cloves and he also provided him with one meal a day. Dharamsi spent the two years working hard, learning about the local economy and business practices, while also picking up the local language, Kiswahili. He took every opportunity to talk to the customers to find out about the countryside from where all the produce was coming. In 1901, when his agreement came to an end, with $40 dollars in his pocket, he decided to go to Pemba. This is where he felt his future lay.

Pemba is a magical island. Gentle, undulating hills and deep verdant valleys are all covered with a dense cover of vegetation. A more fertile land it is difficult to imagine then Pemba. But it is not just the landscape that gives Pemba its magical reputation. For centuries Pemba has held a reputation as a centre for the juju traditions of medicine and magic. Dharamsi bought a donkey and spent a further two years transporting farm produce from the countryside to the town of Chake Chake and bringing tea, rice, kerosene and other necessities to the farmers. In 1903, having earned and saved enough, Dharamsi opened a shop in Chake Chake successfully running it for three years. In 1906, Dharamsi decided to return to Cutch and started working on the Nanglepur family farm once more. He discussed with his younger brothers, Hashim, Datoo and Peera, opportunities in Africa and encouraged them to emigrate, which they did.

His father arranged his marriage with Sikinabai Kassem who was 15 years old at the time and in 1907, Dharamsi, with his young wife, returned to Pemba where they started a shop in the countryside. It was here living on farm land that Dharamsi felt at ease and where he envisioned opportunities for him and his family.

With the profits from the shop, Dharamsi answered his ancestral calling and bought a piece of land. He spent a long time singlehandedly clearing the wild vegetation and replacing them with clove seedlings, fruit trees and vegetables. It takes five years from planting to harvesting the first clove crop. During this time Dharamsi and Sikinabai continued to run the shop and living off the land. Once the cloves from the small plantation began bringing in profits, Dharamsi started purchasing more land in Pemba and continued his passion of clearing the wild countryside into clove plantations. These plantations were at Kipapo, Gagadu, Ndibo, Limani, Mtondoni, Ghombani, Cheche and others. Over time Dharamsi was regarded as an expert on farm demarcation as none of the plantations were fenced. Many a time he was called in by the government to arbitrate in boundary disputes. Besides being a successful farmer, Dharamsi was also an astute businessman, investing in property in Pemba and Zanzibar. One of his acquisitions was a sizable sea front building in Stone Town, Zanzibar on 20th March 1940.

After leaving Cutch, Dharamsi started to practice the Shia Ithnaasheri sect of Islam and raised his family to do the same. He took a hands on interest in the affairs of the Khoja Shia Ithnaasheri Community of Chake Chake, serving as its President, Treasurer and Trustee for many years. In 1926 he supervised and contributed handsomely towards the building of the Chake Chake Mosque. At the same time he set up a trust whereby the income from his plantation at Ghombani (about 7km north of Chake Chake) was utilised for the upkeep of the mosque expenses.

Dharamsi also took active interest in the affairs of the wider community and was renowned for his charitable donations including the building and running of the much needed Medical Clinic on his plantation at Kipapo, 10km south of Chake Chake. He encouraged the good workers from amongst the seasonal clove pickers to build a house on his plantations and allotted them land to grow cassava, sweet potatoes, bananas and other vegetables.

Dharamsi and Sikinabai Gangji had four children. The eldest was a son, Hussein, followed by another son who died in infancy, followed by a girl, Zainab and finally a girl, Kulsum. In 1930, Dharamsi’s son, Hussein, married a locally born girl of Cutch parentage, Zainab, daughter of Mulyani Kulsumbai (Nanima) Khimji. In 1936 they were blessed with a daughter, Rubab. Five sons (Mohamedali, Abbas, Muhsin, Jaffer and Ali Akber) and four daughters (Fatma, Banu, Raziya and Sikinabai) followed. In 1945, seeing the need to educate his grandchildren, Dharamsi moved his family to Zanzibar. To manage the day to day affairs on the plantations in Pemba Dharamsi appointed Hamadi Omari as the overseer. Over the years he became very close to Hamadi, treating him as his own son. In 1952, Dharamsi’s daughter, Kulsum, was married to Hassanali Jaffer Somji of Kilwa, Tanganyika (presently Tanzania). They were blessed with a daughter, Fatima.

In Zanzibar Dharamsi bought land at Mfenesini, about 15km north of Stone Town and oversaw the clearing of the under growth and the planting of cloves, coconuts, fruit and vegetables. He transferred the ownership of Mfenesini to his five grandsons. In 1948, Dharamsi’s wife Sikinabai passed away and on 15th March 1956, Al Hajj Dharamsi Gangji also passed away. In 1957, Hussein Dharamsi supervised the renovation of the property on the seafront of Stone Town, before the family was able to take up residence at the family house on the sea front in Stone Town. 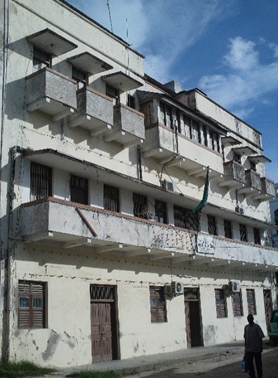 Upon the death of Al Hajj Dharamsi Gangji, his son, Al Hajj Hussein Dharamsi Gangji (Bapa), embarked on the construction of The DHARAMSI GANGJI Shia Ithnaasheri School. The school is located in Zanzibar stone town on Kiponda Road behind The Khoja Shia Ithnaasheri Mosque. Upon completion of the building construction, the school was opened in February 1959 to provide much needed extra classes for secondary education, bringing teachers from India. In the afternoon the school was used to run spoken English and vocational classes for girls and in 1960 the School Faize evening religious classes moved to the school.

After the 1964 revolution in Zanzibar, the running of the school was taken over by the Zanzibar Ministry of Education, who changed its name to The Kiponda Secondary School. Members of the Dharamsi Gangji family continue to support the school in the way of much needed maintenance and upgrade to facilities. 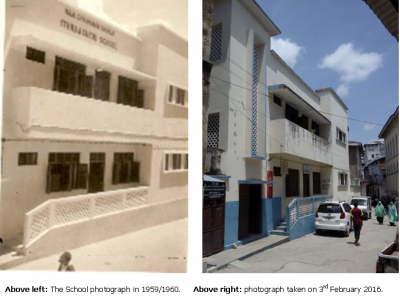 In January 1964 with the overthrowing of the elected government of Zanzibar, all properties in Zanzibar and Pemba and all farm lands were nationalized by the Zanzibar Revolutionary Government. The family residence was converted to Government offices and that is how it is till today. Before the revolution there were about 72 mostly Arab land owners in Pemba and Zanzibar, with 743 plantations. Between 1964 after the revolution and 1974 land was expropriated and distributed on the basis of three acres per person. The majority of those who received three-acre plots in Zanzibar and Pemba Island were mainly indigenous Zanzibaris.

The sacrifices and the various support accorded to the community in Zanzibar and Pemba by Al Hajj Dharamsi Gangji and his son Al Hajj Hussein Dharamsi Gangji is highly commendable, the KSIJ community are deeply indebted to such people, they and several others who played pivotal roles towards the development of our community in the early years of the settlement in Africa should be remembered for their farsightedness and kindness, they remain role models and inspiration to us all.