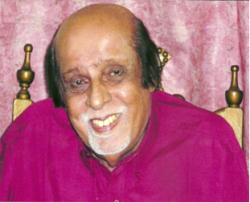 With the death of Haji Bashir Mohamedali Chandoo on the 27th August 2014 (1st Zilkad 1435 AH), Bilal Muslim Mission of Kenya has lost an active supporter of the Mission. He was not only an ardent supporter but one who passionately engaged in Tableegh activities of the Madh’hab of Ahlulbayt (AS) whenever an opportunity arose.

His introduction into social services in the community began when he first associated with Late Gulamabbas Kassamali in Faiz-e-Huseini activities with the Mombasa Jamaat.

Following the formation of Bilal Muslim Mission of Kenya in 1971, Marhum Bashir Bhai associated closely with the members of the Mission. He had keen interest in reading urdu and farsi languages. This enabled him mingle with people from various ethnic backgrounds and engage in Tableegh conversations. His fluency in Kiswahili was an asset for drawing people to engage freely in conversations with him.

Marhum Bashir would always be together with Marhum Haji Ali Muhammad Jaffer Sheriff Dewji. It would be his daily routine at the end of his business for the day to give a lift to Marhum Ali Muhammad Jaffer and go to Dilbahar, a local café, where they would engage actively in Tableegh conversations with friends of the Sunni faith. As one of the committee member of Bilal Kenya, Marhum was devoted to cultivating public relations in the wider Muslim community in Mombasa. This strategy of reaching out to scholars and personalities was of great benefit. As an outcome of these initiatives, some Scholars were invited to deliver addresses at the Husaini Imambargha for the Muharram Majlis programmes. Together with his eldest son Hasan, Marhum Bashir commissioned then the new media facility of video recording by arranging for all the lectures to be recorded and distributing widely the recorded video cassettes. This provided added momentum to Tableegh during the time when such facilities were scares in Mombasa town. Bashir was also instrumental in organizing and conducting TV talk shows over VOK Sauti ya Pwani.

Being a fluent speaker of Kiswahili language he reached out to poets in Kiswahili to write and recite poems (marthiyas) on the event of Karbala. In this he was closely supported by Mulla Sajjadali Bishon and Haji Muhsinbhai Jaffer. Gradually these were introduced as part of the recitations during the Julus (procession) organised by Mombasa Jamaat IYMU on the Ashura night.

Among many well-known Muslim Scholars he knew and made friendship with included the Late Sheikh Abdulla Saleh Al Farsy, the Chief Khadi of Kenya, Marhum Sharif Abdul Rahman Khitamy, Marhum Sayyid Ahmed Badawy, Sheikh Ali Darani, Sheikh Abdillahi Nassir, Dr Ahmed Khatib and many others. In addition, Marhum Bashir developed close ties and worked with the Ismaili and Panjabi communities. Marhum Bashir regularly conducted classes for the purpose of educating the importance of understanding the Holy Qur’an and its meaning.

Over the past few years, despite his failing health, Marhum Bashir maintained his interest and enthusiasm for numerous Tableegh activities and would readily extend a helping hand to Bilal Muslim Mission of Kenya. A unique feature of the life of the Marhum has been his enthusiasm and dedication in pursuit of Tableegh related activities. Bashir leaves behind a widow and five children.