A personal reflection on Luminaries

The word luminaries come from the Latin word Lumen. The word literally means ‘a person who is an inspiration to others.’ I use the word luminary as gender-neutral word, applying it to both men and women. All societies need luminaries because they define the limits of our aspirations. We define our societal virtues by the luminaries we choose, and in turn, our virtues (Respect, Compassion, Gratitude, Friendship, Listening, Kindness, Care and Love) illuminate our paths through those luminaries.

Luminaries serve a purpose in our society. They don't set out to be luminaries but their stories instil compassion, ignite hope and improve lives. They become, through no aspiration nor desire living examples of success. Their stories build connections that sometimes leads to transformation. And when they become Luminaries in our eyes, they call upon us to become Luminaries and help others. A community that aborts its luminaries, will one day, adopt others’ luminaries. To my reader, I ask “Make a list of your luminaries: How many are from the Khoja community?

This particular journey down memory lane is to acknowledge luminaries. Our elders carefully positioned three significant events to pass on our traditions: Azadaari, weddings and funerals. Through those three events, they unified the community. Today, those traditions are replaced by new traditions, equally valuable. Through the narrations of those traditions, I hope our minds drift to various examples of luminaries in our lives who instilled in us the love of azadari and service to the community. These luminaries served as Mukhis, made laash and alams, recited majlis and rendered many examples of service to our community. Some luminaries ensured their homes served the cause of azadari. It is through their service to our community do we see the exemplification of virtues.

One such luminary was Baiji Sherbanu. Hours before her demise, the cubs gathered to bid the Lioness adieu. It was as if by cosmic design each cub knew its place: Be it next to the Lioness or Bainal Haramain or on the sacred grounds of Khorasan. Each at their appointed destination praying for the soul of the Lioness as it was being received by her Lord. The Lioness was eagerly waiting for her time. It felt as if each had been given a special assignment that could only be delivered by that cub. Are there people on His earth in these days and times who can wrought their taste of death when they want it? Where they want it? Who they want there as they taste the ultimate nectar of love?

After seeing and hearing of Baiji Sherbanu’s death, I am convinced there are such people, very few and far between, dwindling numbers like the grain of sand in an hourglass. I decided to write this personal reflection about this great luminary considerable time after her death. In a society where tomorrow is too late and today is just about bearable, immediacy has become the norm, the Great Lockdown has been a sobering time for reflection. Perhaps what nudged me to do this was an act of recitation of the Holy Qur’an and I offered to recite Surah-e-Rahman for the Marhuma.

Why that Surah for my dear Baiji? Well, I had heard her recite this during my infrequent visits to see her. Memories of her son Jaffer telling her off on her sweet tooth and its effect on her diabetes. My Baiji’s standard response was quite powerful for Jaffer had no comeback: “Unanikataa fatya (In Kiswahili)” (Are you going to deny me fatya). The arrow had hit the target and Baiji was “allowed” to eat the fatya of jalebi. Concerned of her welfare, I did point out to Baiji technically the jalebi was from a walima. To which a defiant Baiji stated the walima was after all the Sunnah of the Holy Prophet. In future, I always minded my words with caution while applying a balm for the present self-inflicted burn.

Baiji knew Surah Rahman by heart and my memories of her application to herself always left an indelible mark on me`: So that’s the purpose of Qur’an: Application to oneself. Marhuma Sherbanu was born in Zanzibar on 19 April 1931 and she passed away one day shy of her 88th birthday on 18 April 2019. The daughter of Marhum Akber Mohamed Jaffer and Marhuma Laila Dharsi, she was brought up in the household of Marhum J M Jaffer after the death of her father at a very tender age.

The Jaffer family was well known for being the custodian of Mehfil -e-Khorasan in Zanzibar. In the days of communal divisions in Zanzibar (Juni and Nai masid) Mehfil-e-Khorasan was the only abode where community members would collectively gather for communal worship. There was one other exception: members of the Juni Masjid would walk to Nayi Masid to celebrate the birth of Hazrat Abbas (AS) in Nai masid. On this occasion, the highest accolade to the custodians of Juni Masid was to invite them to sit at the degh and serve niyaaz to the community. Leaders of Nai would invite the leaders of Juni to do this honour. Though both were masjids, community members till today would call it masid.

Baiji Sherbanu married Ahmed J M Jaffer on 31 December 1950. In 1971, she together with her youngest daughter joined her other children in Portsmouth. Why Portsmouth? The former Sultan of Zanzibar was in exile in Portsmouth from 1964. The house on Pelham Road where the seeds of the first Islamic Society were planted by Marhum J M Jaffer, where all schools of thought were part of the whole Ummah. Sunnis and Shias got together regularly to celebrate the Birth of the Prophet, Eid-ul-Fitr, Eid-ul-Hajj and commemorate the martyrdom of Imam Hussein (AS). Marhum J M Jaffer built bonds of friendship and of love across the Muslim rainbow. The legend who guided our community to its first-ever federation, The Tanganyika Territorial Council, used his magnetic personality to give Muslims a voice at, for example, the Council, the local polytechnic. He arranged for key Muslim leaders and the youth to travel to London to meet the famous Muhammad Ali. 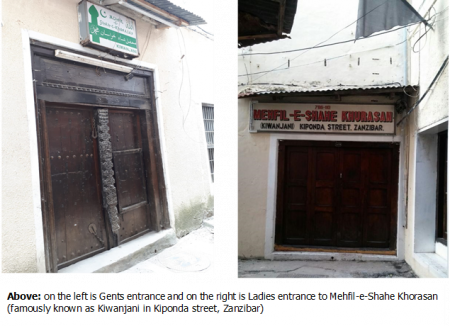 Communities that are given birth by women perhaps have somewhat a different feel than a community started by men. Wessex Shia Ithna Asheri Jamaat is one such community. It has always had this different feel. Baiji gave birth to Wessex Jamaat, and Marhuma Bai Laila Mohamed Versi was its nursemaid. The story of its birth has a tinge of fabrication but the historical incident can be independently verified by the driver of that infamous journey. It was the second year when a bus was organised from Portsmouth to take all the Khoja students from Portsmouth Polytechnic and Highbury College to Hammersmith Imambargah for the commemoration of Ashura. In those summer days, the Sham-e-Ghariba majlis was held late in the evening so the students would depart as soon as niyaaz was served. That year, on their return journey, the students began a game of Antakshari (translation - the game of the ending letter). In this game, each participant starts with a sentence that begins with the Hindi consonant on which the previous participant’s selection ended. A few students began this game and pretty soon almost everyone was involved. However, the revelry got a bit heated. Baiji heard the commotion and in her stern voice said: “Don’t you have any shame! We have just shed tears on Imam Hussein and you are doing this!” A pin drop silence ensued and as they reached Portsmouth and disembarked, Baiji announced there will be majlis at her house with niyaaz starting Friday and everybody was expected to be there. Thus, began Wessex Jamaat, the premise being Baiji’s home on Elm Grove, Southsea.

These were the days of the video tapes of English and Urdu majlis. Youth were given tasks such as recitation of Hadise-Kisa, munajat, mersiya and ziyarat.

My earlier reference of a tinge of fabrication related to a small aspect of this narration that needs to be re-examined but I will leave this to the travelers on that journey to accurately record history. Considering that almost all the students were male, a game of antakshari is highly unlikely to be initiated by men. My assumption is, and there is no corroboration for this, there had to be a catalyst for the initiation of this game. On that journey, a young Persian woman was also one of the passengers. My assumption is that this young woman’s mere presence, could have impressed men to express their vocal cord vulnerability and play this game. Obviously, there is no independent verification for this assumption and as many would say: Allahu Al’aam (God knows best). However, I sincerely thank this young woman. In fact, members of this community owe a debt of gratitude because her presence on that bus on that day changed the course of history for this community.

Presence of Baiji in Portsmouth

In early 70s, parents who wanted their children to go overseas to study, gave highest consideration to the presence of Baiji in Portsmouth. She was locus parentus for many and soon the trickle of students became a flow. Portsmouth Polytechnic’s Pharmacy course became the magnet and many pharmacists who are now in the late 50s, early 60s and late 60s. The Lioness loved her cubs. It was as if she was made for this role when at the age where girls played with dolls, Baiji took care of her eight-month old brother, Mohammedali, in J M Jaffer’s household.

As the influx of the students increased, the gathering at Elm Grove every Friday with niyaaz was a roll call of her cubs’ well-being. Once, she found one of her own had not shown for two weeks in a row to the Friday gathering. Her other cubs were also not aware of whereabouts of this particular cub. After the Friday gathering, Baiji instructed her eldest son (actually her son-in-law but by all accounts, her eldest cub) to take her to the YMCA where the cub resided. Here, she found a young man, not well, and insisted he was going home. This was how the lioness nursed her cub home.

I lived in the midst of Baiji for just under 29 years. As I reflect, I don’t think I spent more than five hours in total over that vast span of time in her company. And that is sad. How many Eids could have been made more memorable had I visited her? Or perhaps even phoned her and enquired about her.

In this Great Lockdown as I reflect on Surah-e-Rahman that I recited for the sawaab of her soul, I wonder what would have been weightier in His Books of good deed. The recitation of this surah after her demise or a visit to her during her life. I know what more I would do now. But my Baiji’s selflessness was always well-known. With that radiant smile on her face, I know she would nudge me to apply this reflection and connect more with those left behind. I have made a small list of those I must pay a visit as soon as this Great Lockdown comes to an end and would dedicate that deed for the soul of lioness. I hope that is weightier than any recitation of the Holy Qur’an.

I would like to thank the following people who contributed to this article: Dr Jaffer A Jaffer, and Nowsheen Jaffer. And Takibhai Jaffer for sharing the photographs of Mehfil-e- Shahe Khoransan (Kiwanjani).