In a recent zoom telecast on 'Unguja Yetu' the question of Nai Misid and its probable 'musavvat' connection crept in. Having been into its research and with my affiliated link the implicit assumption about 'musavvat' is not a surprise. Anyhow, in the context of its analytical research there must have been something more to it. Here it needs a mention that some of Nai Misid's founding members who were 'Nangaria' (Jamnagri) were among the initial Khoja settlers having arrived in Zanzibar since the 1830s and even contributory to the funding of Zanzibar's 'jamaatkhana' (JK). However, they were staunch 'Fidai' (firm believers in Maula Ali) and also traditionalists having stuck to their roots and the languages Gujarati & Kutchi. In their own way they were influential and had even connections with the likes of the Sultans of the time. They were prominent among the Khojas and some even held the position of 'Mukhi' with executive powers vested in them. It is understood that even after their defection the Aga Khan would pay a visit to their 'pedhi' (shop).

The leading Kuwwat jamaat Khojas on the other hand turned up later around 1870s from India where the Khoja agitation was stirring up. They entered the jk with a bang and were soon debarred while the eventual Nai members persisted with their diplomacy. The outcast Khojas succeeded in forming their own jamaat and putting up their own mosque & cemetery. They were more extroverted and easily built up connections with the locals and took up the language Kiswahili. They had Agha Sayad Abdulhusain Marashi dispatched to Zanzibar and thus enhanced their relationship with the Persians.

After a few years when the 'Fidai' (the eventual NAI members) seceded from the JK to join their 'Kuwwat' counterpart they did gain the entry but they were received with a certain reluctance and the welcome being lacklustre. Mind that there is no documentary evidence to this but rather anecdotal and from hearsay. Incidentally emerged Molvi Gulamhusain (Sayed Aqa) and tension flared up. His solid oratory and glorification of Maula Ali drew the 'Fidai' (eventual NAI founding members) to him. They were accused of 'shirk' and dubbed 'musavvat'. Sadly, Sayad Marashi and Sayed Aqa could have become entangled in this friction. The 'Fidai' even prayed behind Sayed Aqa waiting for Sayad Marashi to finish off the jamaat prayers and give way to Sayed Aqa. The situation worsened and Molvi Gulamhusain was reported to the Authority in Zanzibar and given ‘deportation order’. From hearsay a Samaritan came to his rescue and got the ‘deportation order’ waived. The seeds of discontent had been sewn and eventually sometime in the 1890s Hujjatul Islaam Jamaat was formed under the guidance of Molvi Gulamhusain (Sayed Aqa).

Initially there was no President or Secretary at Nai Misid but ‘Mutwallis’ (Trustees) and of course ‘Mukhi’ and ‘Kamrio’ who were held in very high esteem (Mukhi and Kamrio are traditionally Khoja designations to which we adhere even today though status quo not maintained as before). For that matter it is doubtful if initially even the Kuwwat Jamaat had its President designate or Secretary designate though we do give mention to Peera Walli or Ali Nathoo as presidents in that era. This could be presumption considering that they probably headed a team of Trustees and thus the designations ‘pramukh’ or ‘mantri’ ascribed to them. They could have even been ‘Mukhi’ as in the Khoja set up ‘Mukhi’ was the foremost authority. At Nai Misid the 'Mutwallis' who were mostly the founding members (or their descendants) held sway over the mosque/imambara for decades. The resentment could be felt among certain Nai members who formulated its constitution and had the Mutwallis dethroned. A fierce tussle raged on. A couple of the Mutwallis even defected to the Kuwwat jamaat. In the meantime, Abdulrasul Hassan Virjee in adherence to the constitution was elected Hujjat jamaat's first President. Also Nai Misid underwent extension and a new ladies' imambara affixed to it. 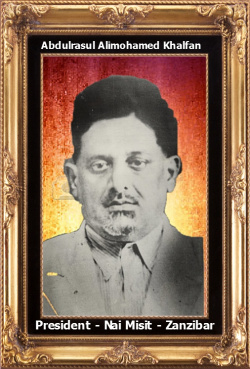 Such was the intensity of misunderstanding between the Nai and Junni members initially that they not only boycotted each other’s mosques but even avoided to enter into wedlock. In rare cases when such a marriage took place the groom often shifted away to the bride’s side. In one such instance the 'nikaah' ceremony was performed twice, one by Agha Sayad Husain (Junni mosque 'peshimam') and the second recited by Agha Najafi (Nai mosque 'peshimam'). After the Second World War things improved and when Nai’s president Abdulrasul Khalfan died in 1944 while still in office, both Nai and Junni in rare unity, closed business on the funeral day. Nai Misid with such illustrious members as Nasser Noormohamed Kasmani, Datoo Hemani, Mohamed Alarakhia Shivji and several others had come to acquire the trusteeships of institutions like the monumental dispensary, ‘kanyashara’, ‘bewakhana’ and property consisting of ‘shambas’ and scores of houses. From hearsay even the Mehfile Ali Makam property belonged to Datoo Hemani who had bequeathed it waqf before the Junni/Nai secession. Hujjatul Islaam Jamaat of Zanzibar was then regarded as the richest jamaat in the Khoja World.

The ‘Hazrat Abbas ladu nyaz’ held annually at Nai Misid was traditionally the Jamnagar/Jodia/Khambhalia Khoja Ismaili event prior to the secessionist days. It had to coincide with the Hindu month of Ashad and was celebrated with great fervour. The Jamnagris abided by this tradition and in the early days it was always held during the Hindu month of ‘Ashad’. Later the ‘Ashad’ factor was nullified but the ‘ladu nyaz’ continues till today. Also to this very day some old Khoja Ismailis seek ‘Abbas Alija laddu’ nyaz when this feast is held.

There were certain Kutchi families too at Nai Misid. They had linkages with the Jamnagris. The fabulous minaret which symbolizes Nai Misid was built in the 1940s by Mohamed Rhemtulla Merali (Mamu Hariri) who was a Kutchi. It was in loving memory of his wife, a la Taj Mahal built by Shah Jahan in memory of his beloved wife Mumtaz. If not mistaken in the early days there was no registration or subscription of members though later a one shilling subscription was introduced by both Kuwwat and Hujjat jamaats. Interestingly the late Baqarbhai Alloo in one of his personal posts had stated, “My grandfather, my uncle and my father were all buried at Junni Kabrastan but because of the nearness to our house almost all members of our family frequented Nai Misit. We never felt that we were strangers among the Nai congregation and participated fully in the ibadaat such as salaat and majlis. Niyaz at lunchtime on 8th day of Moharram was from us until the revolution scattered us. My late brother Hussein was a favourite dua and Quran reader at Nai Misit and my cousin and brother-in-law Mohamedhussein known as Bwana Ali was in charge of the electrical system at Nai Misit. Remember that there was no membership system in Zanzibar at that time and the proximity played a key role to attendance, which then took the form of loyalty. If Nai Misit had been built at Kiponda, the 'membership' would have been much larger.”

Sadly, times have changed. Today Nai Misid’s tiny jamaat (devoid of its past Khoja members) is reduced to almost nonentity but with the assistance of the likes of Banubai Tarmohamed and Zulfikarbhai Habib it still abides by its legacy and traditions.