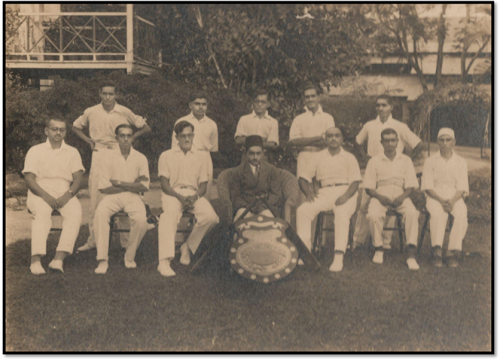 Alhaj Mohammed Jaffer Rashid Nathani, became popular by his nickname - Maalim Mia when he scored a century in one of the Cricket matches in Zanzibar. Mia in Kiswahili meaning Hundred. Maalim Mia was a good cricketer and also a dedicated teacher at School Faize (Madressah) of Zanzibar. A number of students from School Faize still remember Maalim for his deep knowledge in religious studies, i.e. Aqaid, Fiqh, Akhlaq and the Holy Qur’an and, he also had good understanding of languages including Urdu, Farsi and Arabic.

In 1926 British Navy H.M.S. Pegasus anchored at Zanzibar Port. Cricket Match was played between H.M.S. Pegasus Navy personnel and Zanzibar Government National team – The Zanzibar Eleven. Three players who played in the team were from our Community, Sherali Meghji, A. G. Versi and Y. G. Versi. This was recorded in official Government Gazette of Zanzibar.