Akber Gulamali Damji was the second son of the late Marhum Gulamali Damji. He was born in Dar es Salaam and following the footsteps of his father, was an active social worker. He had his own business of electronics on India street, called “RadioVision” opposite the present day Sabodo Parking complex”.

He served as a member of the managing committee and trustee of Dar es Salaam Jamaat. His keen interest in politics saw him join TANU where he served the party in various capacities. He was elected as Chairman of Kisutu Branch of CCM and when Mwalimu Julius Kambarage Nyerere retired in 1984, he took a delegation of Veterans to the State House to greet the President Mwalimu treated the delegation with a sumptuous lunch. During “Economic Crackdown Period” he helped many residents of Dar es Salaam. During the same period Marhum was always available to assist whenever required by the Jamaat. He helped many non-community members as well. Daudi Bohora Jamaat appreciated his services and presented him 3 times on different occasions the “Shawl”in their Mosque when their Head priest visited Dar es Salaam.

Marhum was popular among the business community and was elected member of the managing committee of Dar es Salaam Merchants Chamber. He passed away on 4th May 1988 (17th Ramadhan 1408). His date of death is the same as his father the only difference is the year. 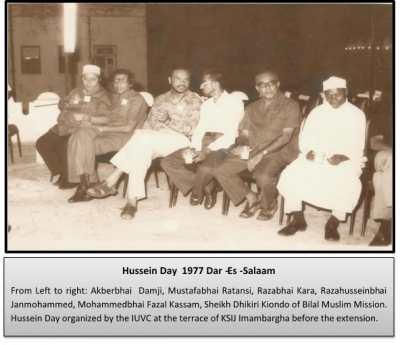