Ahmedbhai Haji Fazal Hasham was born in Mogadishu in 1906. His father was a renowned businessman, a pious and an active member of the community. Ahmedbhai’s father Fazalbhai brought a teacher from India on his own expenses in order to teach the community children. Through this, Ahmedbhai learnt his basics in Gujrati and learnt Qur’an from an Arab Maalim. He also studied Italian language at the Mission School.

Ahmedbhai and his sister were the only living children from the total 10 children of Fazalbhai. Being the only son Ahmedbhai was the whole and sole adviser of his father Fazalbhai.Being the one and only son, Ahmedbhai’s wedding was celebrated in a very grand manner in 1923. The wedding ceremony was celebrated over many days, with feasts being served continuously and on many occasions in their home village of India. Moreover, many Muslim scholars throughout India were invited to deliver sermons in order to bring about awakening about religion among the public.

After the wedding Fazalbhai chartered a steamer namely “Damra” in which his family members and the newlywed couple left from Mumbai to Mogadishu. The steamer was laden with goods for his personal business in Mogadishu. The onlookers at the port envied the newly-wed couple who were given the best services by the dedicated father.

After 12 days of sea voyage the steamer docked at Mogadishu port. The people in town celebrated this occasion and were very happy to receive the newlywed couple together with the family. All the streets were decorated with flags and a red carpet was laid from the port to their home on which the newlywed couple walked past. Fazalbhai, happy and joyous on occasion of wedding of his son, served a grand feast (Walimo) for all people in the town.From this wedding Ahmedbhai was blessed with 10 children out of which 8 survived - 4 sons and 4 daughters.

In 1925 Ahmedbhai’s father Fazalbhai passed away. After his father’s demise the family business established under the name of “Hasham” continued for about 5 years, due to some misunderstanding between the partners there was no more good understanding and cohesion in the business.Ahmedbhai inherited his father Fazalbhai’s cool temper, selflessness and sincere dedication towards the society and was ever ready in serving the community.

He served as the President of Jamaat from 1925-1930. From 1932 to 1945 he served as the Vice President under the President Murajbhai.He has been extending his services in different committees and occasions. Furthermore, he would go out of his way to offer his services to the public in many areas.Up to 1935 he was the Adviser to the judge in criminal cases. During the Italian Abyssinia war and upto 1941, Ahmedbhai on behalf of the Government was given the responsibility to censor all the telegrams and other messages.

From 1951 to 1956 he was elected as a trustee for Indo-Pakistan by the Somalia Government.From 1956 to 1958, in the first public assembly election of Somalia, Ahmedbhai got the maximum votes from all the people thus he remained as the Vice Chancellor of the committee.He was also elected as Deputy Advisor of the interior ministry committee. As an Adviser he was well known in the Government and he was also appreciated by the media.He was also a member of the Chamber of Commerce as well as Income Tax Appeal Tribunal. He also served for 10 years during the British rule and then he served as a treasurer for quite a long period in the British established Cultural society.After 1946, Ahmedbhai once again went for a long tour of his hometown in India. He also made several trips to Asia and East Africa. 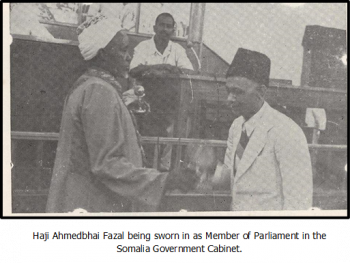 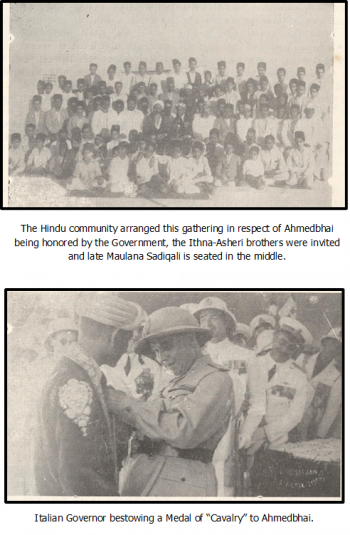 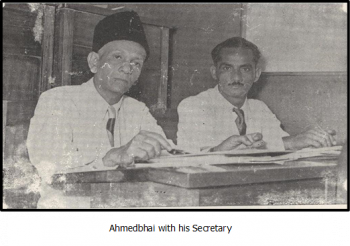