Br Khadim Hussain gave the lower area of his own house free of cost for the 1st Majalis until we get the facility from the Jama'at. Below mentioned is the list of brothers who attended this majlis:

Above mentioned names of brothers were following the Shia Ithna Asheri faith, but they didn't declare this.

Eventually, Marhum Dhanji Bhai filed a case in court against the Aga Khani community for a piece of land in their Qabrastan. For that reason, the Congress leader, respected Mohamed Ali Jinnah, prepared both parties to settle the dispute peacefully. It was compromised in the form of an out-of-court settlement that 40% of the qabrastan area will be given to the Shia Ithna Asheri community. Accordingly, a 901 sq feet area was purchased from the municipality at a rate of Rs 2/- per sq. ft.

When there was no particular place for Majalis/Mehfil during those days, Br Dhanji Bhai donated his own house to the Jamat for Majalis/Mehfil. Once masjid & mehfil is ready, namaz & majlis program was planned over there. This donated house is now unattended as no one is using it. Marhum Dhanji Bhai Noormohamed, unfortunately, had no children, so he donated his own resident home for the Imamwada. The house was used for Majlis/Mehfil from 1955 to 1958. After that, a trust was formed, and the donated house was registered under this trust. Father of Akbar Bhai Vakani Ahmed Bhai Fazal Bhai Vakani, Father of Ramju Bhai Vakani Rajabali Fazal Bhai Vakani, and Father of Sohail Bhai Vakani Chotu Bhai Vakani were all first trustees of the trust. After that, Ramzan Bhai accepted the post of president of the trust when he migrated to Surat. Marhum Al-Haj Mulla Asghar M M Jaffer Saheb] and Haji Gulamali Bhanji (Bapu) came to Surat in 1978, and when he saw few families living in huts near the banks of a river and 2-3 families living in the qabrastan, his heart melted. Mulla Asghar gave Rs 2,20,000/- to Surat Jamaat. He got a mosque, Imamwada & 14 rooms constructed. In 1978, we got the project inaugurated with the Mubarak hands of Marhum Mulla Asghar Saheb.

Alhaj Aunali Bhai settled in Surat in the year 1980. He took the work of tableegh in his hands and started helping poor people with the help of sadaqah & charity. Also, madrassah classes were started for the religious tableegh. While meeting the momineens of Surat, they were invited for Namaz & Majlis. He used to teach the importance of namaz. He used to recite Ziyarat & Duas for the momineens. Not only this, but Alhaj Aunalibhai Salehmohamed Bhai, in Muharram after the majlis, used to recite the masaheb in Gujarati and keep the community awakened. He got the chance to watch the poor in surat very closely. In Surat, education was also proportionately less. He realised that no work would succeed without the proper spread of education. Thereon, he took a firm decision that to raise the educational level of the surat community, and he rushed quickly. As this task wasn't possible with a single hand, he took The World Federation's help. In 1978, during his chairmanship of Zainabiya Child Sponsorship, he really worked hard for the education of the Surat community. Other than Surat, he personally also visited various villages of Gujarat & motivated every student of our community. Especially to attract and encourage the females of the community, he has distributed free books and awarded them. Boys who left the education halfway were sent abroad and given jobs there. Surat Jamaat has made a historical note of this. Surat Jamaat will never be able to repay this facility. To strengthen the religious faith in Surat, in 1984, he built the Roza of Hazrat Abbas (a.s) & Hazrat Imam Hussain (a.s) from his family fund. Not only this, but while he was living in Surat, he realised the need for a Gusalkhana and thus donated a Gusalkhana too to the community.

He started helping in social activities. Especially started helping the needy and older people of the community. There was so much poverty that sisters of our community used to work in other community houses for their livelihood. For his excellent services to the Surat community, he was given the title of 'BAPU' . In Surat, you were known by the name of Bapu. Today also, people of Surat know & call him by the name of Bapu. From 1980 to 1995, he migrated to Ahmedabad. But he was so attached to Surat that he returned from Ahmedabad to Surat in just two years. From 2006 to 2010, a mosque was renovated. Also, in 2016, an Imamwada was constructed who is now known as Panjetani Mehfil. 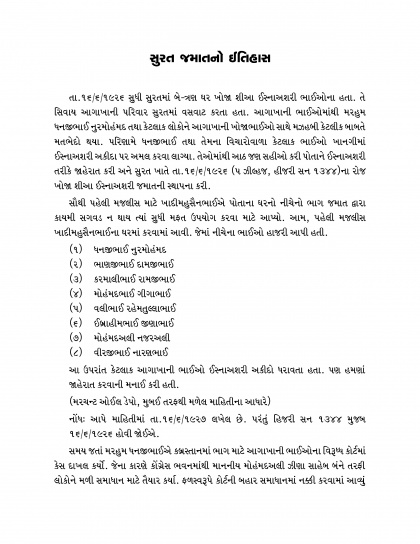 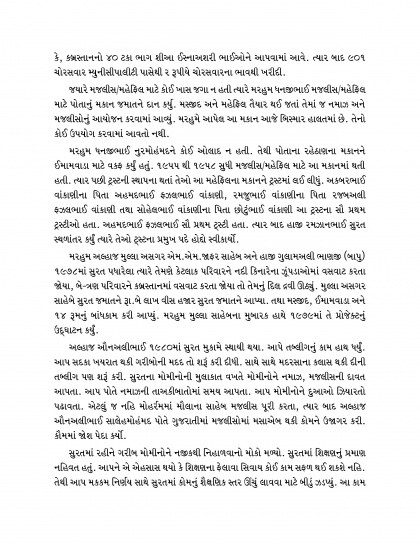 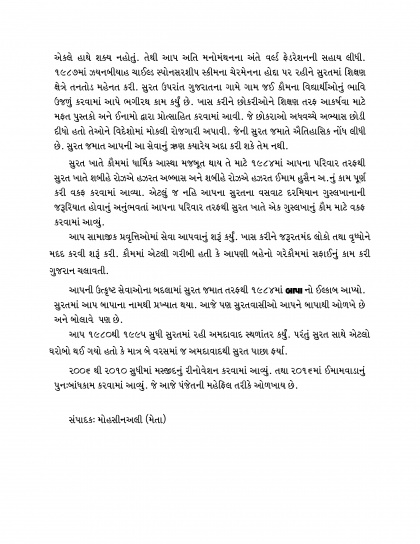